An Abstract View of Photography – Seeing the Light

If you’ve been following this blog – and some of you kind people have been – then you’ll have seen me dabbling more and more over the last year or so with what I’ve called abstract photography. I didn’t know until a minute ago that there actually is a proper thing called abstract photography; I’ve just been stumbling into it. I started photographing with my first camera about 50 years ago (I was very young) and have been trying since then for the perfect photograph. No harm in that but I had the idea that those that could painted, and those that couldn’t sought consolation in photography. I guess I had painter-envy. Envy of their freedom with everything; colour, composition, light, perspective…….envy of them being Artists perhaps.

Even now proper photography is generally about perfectly and realistically reproducing the scene in front of the camera. Even in this era of digital images and processing, ‘fiddling’ with the photographs risks being called out for not being ‘photographic’. Many painters now aim for stark realism, with no risk of not being a painter. Yet photographers who stray from stark realism wander into a no-mans land; of what?

Are photographers artists? And are photographs art? I have taken tens of thousands of photographs over those 50 years and mostly never contemplated these questions. I didn’t consider myself artistic; I couldn’t draw or paint and I assumed that these are things you either have or don’t have. But I did like a lot of art and perhaps have an eye for a good scene and nice lighting. Yet a big barrier existed between art and photography – in my mind.

Something happened a few years ago which opened a crack in that wall; and as Leonard Cohen asserts it’s the cracks in things that let the light in. As luck would have it we were in Auckland doing arty things with my daughter (who is an artist) and visited a Brian Brake exhibition. I’d heard of him as being one of NZ’s best and most famous photographers. And the exhibition did show that all the acclaim was well justified. However, it was one of his photographs which I’d never seen the like of before which started me thinking. 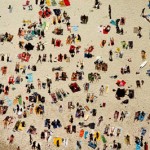 That’s what it looked like from a distance. Like a bit of ‘modern art’ or some random blobs of paint in interesting patterns. As I walked closer it changed; into a photograph of bathers on the beach, at Bondi, taken from the air directly overhead. 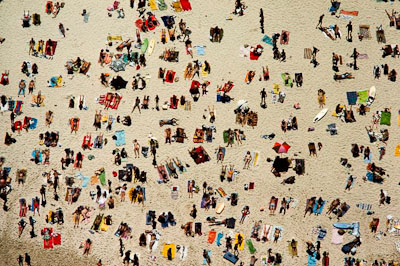 My guess would be it wasn’t just a lucky snap out the door of a plane flying around. I imagine he visualised the whole thing first, and then executed his vision. In any case, for me it was a revelation. It answered the question I didn’t even know how to ask; when is a photograph not a photograph? From a distance it is abstract art. Up close it is a detailed photograph. Thank you Brian Brake for messing with my mind. You put a crack in it, and that’s where the light got in. [see more of his images here]

Then a couple of years ago on a TV programme about a town up north I was interested by Jeanette Vickers standing in the sea taking photographs of the water. What captivated me were the results. She produces gorgeous abstract images with exquisite colours. She is from Mangawhai Heads in Northland. 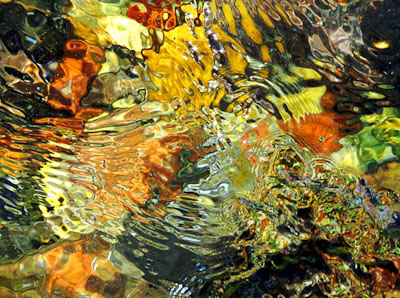 She sells these fabulous works as one-offs, another interesting concept for “photographs”.

If Brian Brake had made the crack in my mind then the light I saw was the wonderful colours of Jeanette Vickers’ abstract photographs. I couldn’t figure how it worked but I started photographing stuff through water. It didn’t look much like her’s but that’s OK. She got me experimenting and it’s a lot of fun seeing where it goes. I’ve done a few water  ones but I’ve figured it’s not about the water; it’s about my imagination.

We had a few good frosts in Mosgiel this winter and one Saturday morning I wandered around the paddock photographing the icy puddles. Cold, muddy, icy puddles. They proved to be fertile subjects. After some adjusting and tweaking and sliding of sliders, I was quite pleased (and surprised) with the results. 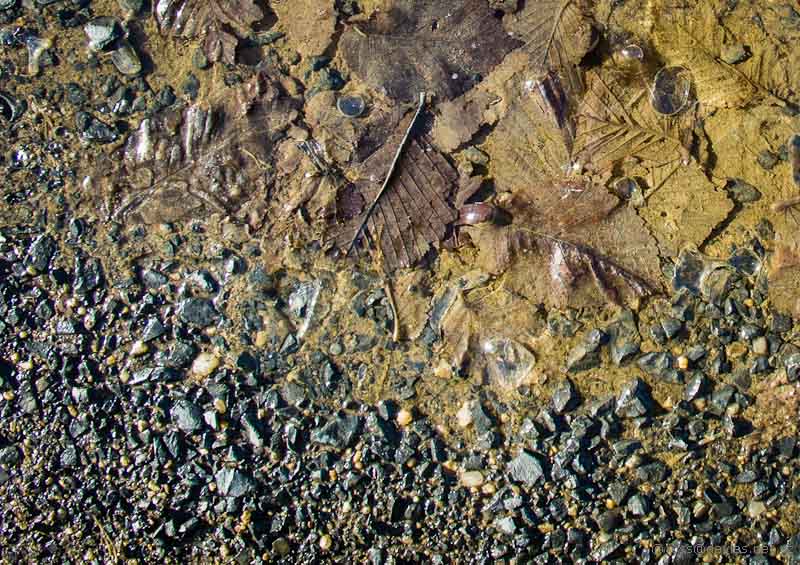 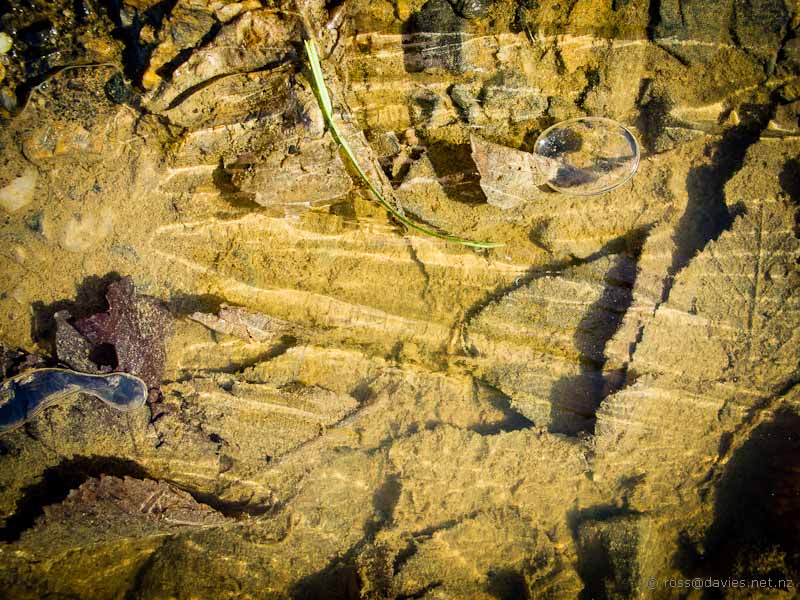 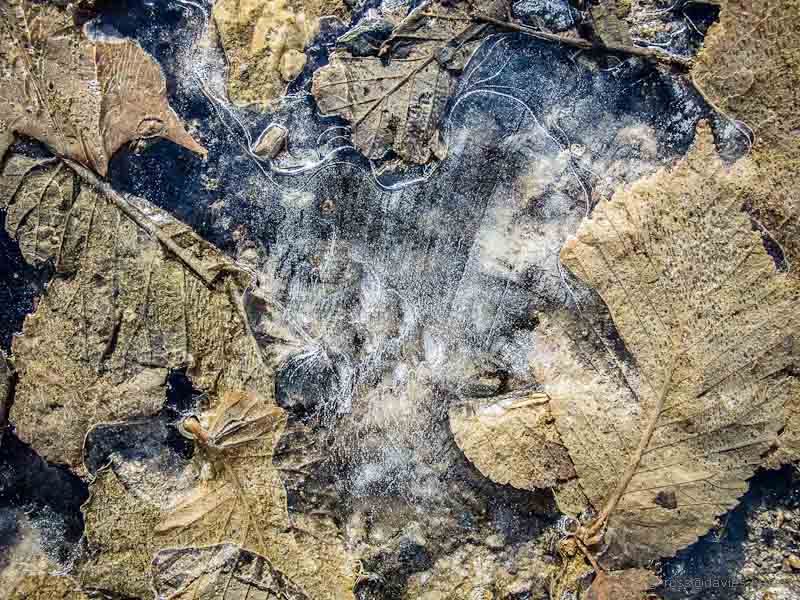 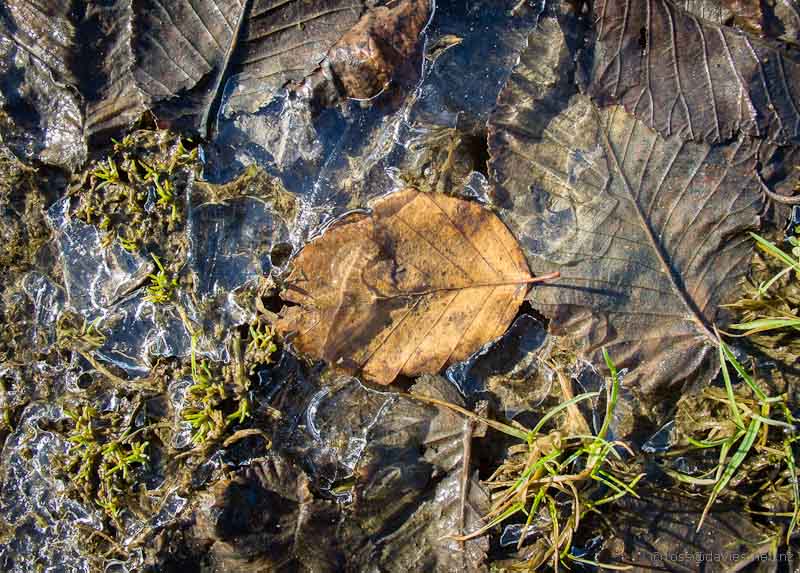 And then there was the ice itself, and the random patterns. I see all sorts of weird shapes in those patterns; I think our minds are wired to try to make sense of things? 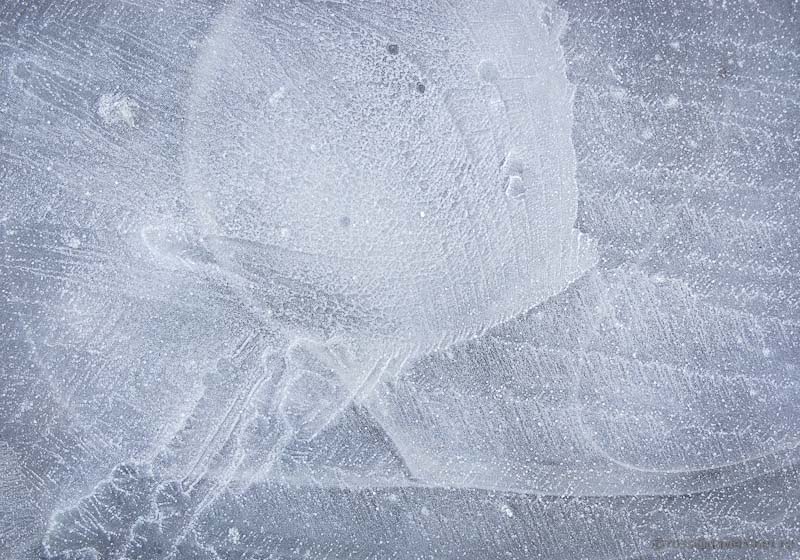 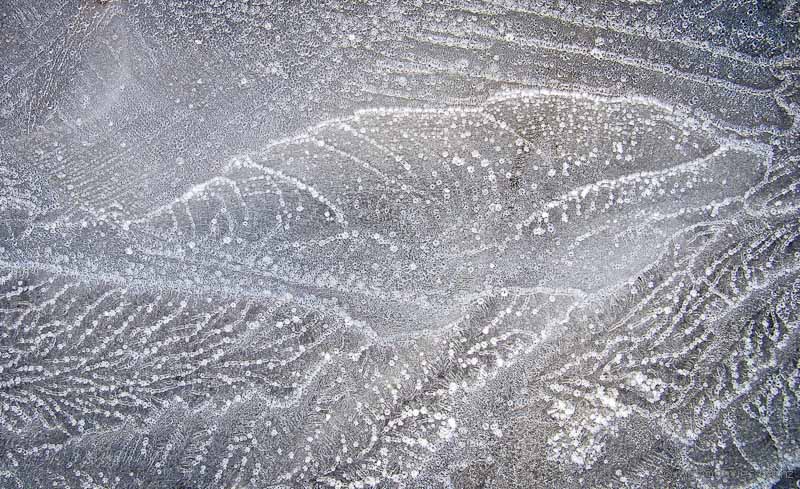 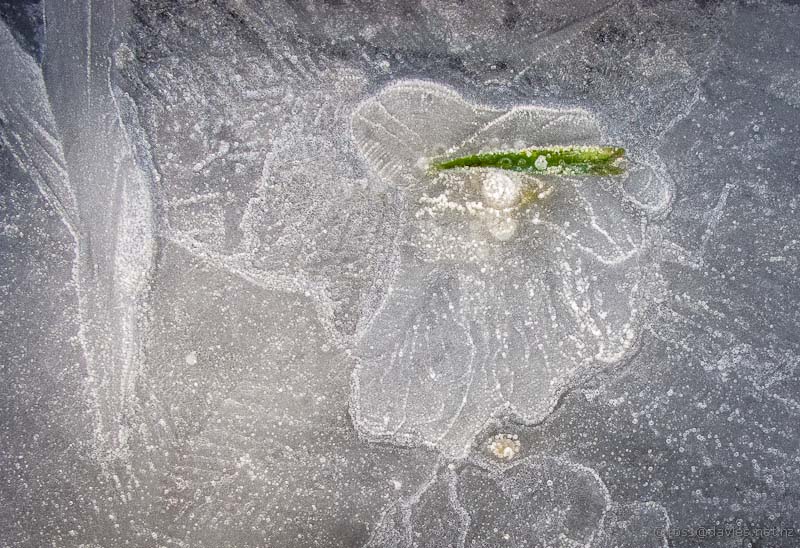 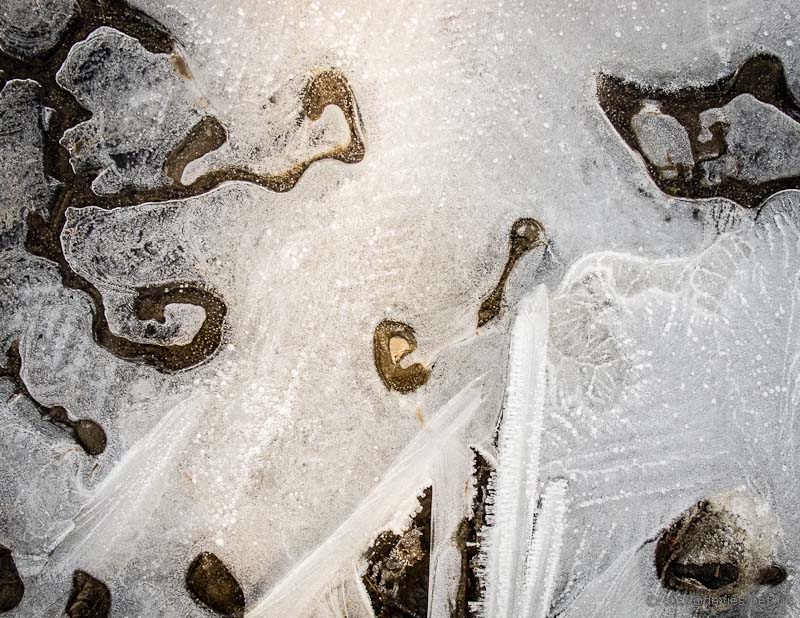 I’m not sure exactly what ‘artistic licence’ is but it seems to grant artists freedom to fiddle around with pictures. For painters that’s OK yet it’s frowned on when photographers do it. I’ve decided that’s not fair. I’m now claiming ‘artistic licence’ for working on my photos. I’ll fiddle and faddle and mix and match and not worry about what it is – just about how it looks and whether I like the look.

Here’s an example of what I get up to. Here’s a photo as it came out of my camera. 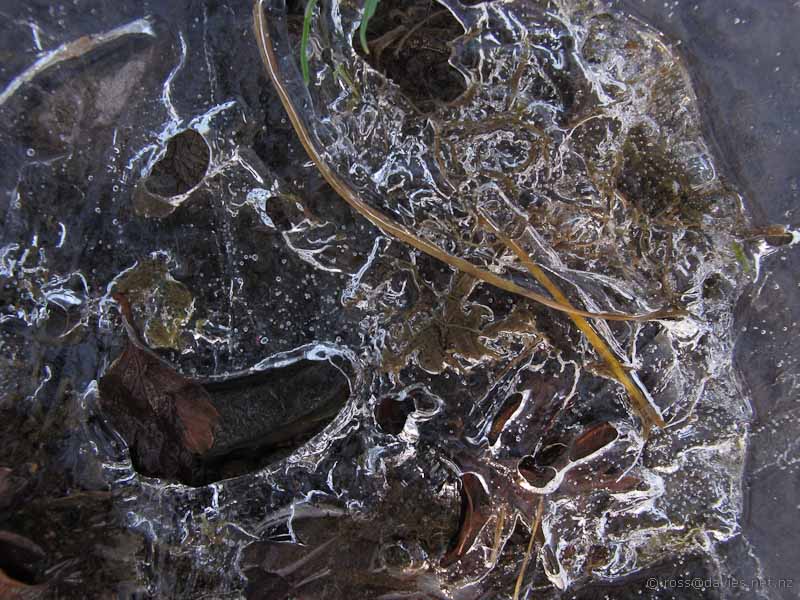 Ice Puddle #5 out of the camera

It looks fairly lifeless, and colourless. This is how the camera sensor sees the scene. Most cameras do some processing in the camera to make it look better and hopefully more how our eyes and brains see the scene. Plus the camera compresses the file to squeeze more photos onto the camera card. So the JPG photo you see has already had some fiddling and meddling before your camera even lets you see it. Some cameras also record/save the raw image that the sensor recorded, and the picture above is an example of that state.

These are the better ones to work on for a number of reasons. And work on them I do, with a fiddle with this, and an adjustment of that; maybe chop a bit off that side, and then this side. And eventually it turns into the following picture. 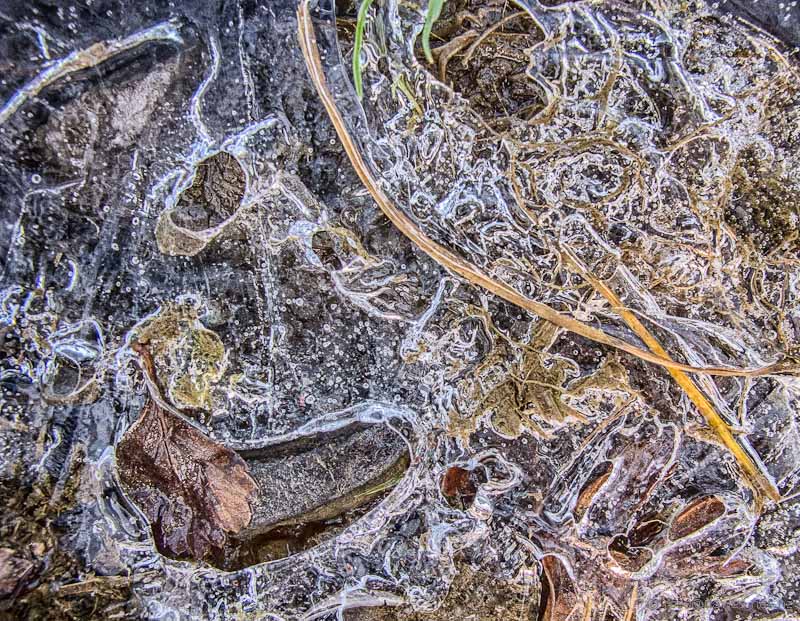 With this one I also tried out a new processing filter thing I’d just found, so Take 3 ended up with more colour and more … other stuff. 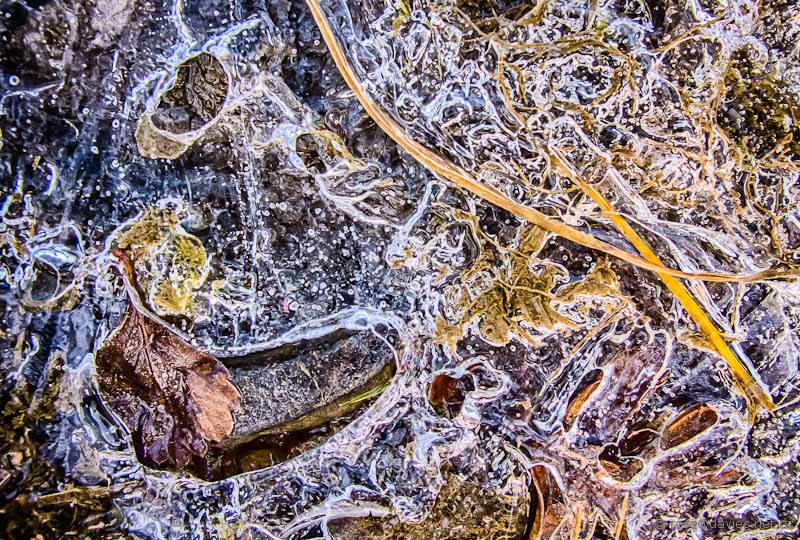 I like Take 3 the best. I have added nothing, just adjusted the colour saturation and balance, fiddled with the contrast and changed the dynamic range. I’ve claimed my ‘artistic licence’ and it’s a lot of fun. And I’m claiming it as an abstract.

So to conclude the discussion I started a long way away up there at the top, what is abstract photography? According to Wikipedia, “abstract photography, sometimes called non-objective, experimental, conceptual or concrete photography, is a means of depicting a visual image that does not have an immediate association with the object world and that has been created through the use of photographic equipment, processes or materials. An abstract photograph may isolate a fragment of a natural scene in order to remove its inherent context from the viewer, it may be purposely staged to create a seemingly unreal appearance from real objects, or it may involve the use of color, light, shadow, texture, shape and/or form to convey a feeling, sensation or impression. The image may be produced using traditional photographic equipment like a camera, darkroom or computer, or it may be created without using a camera by directly manipulating film, paper or other photographic media, including digital presentations.”

Phew! That covers just about anything. Wikipedia also offers “There has been no commonly-used definition of the term “abstract photography””. This is just wonderful. I think it means that if you want to, you can call yourself an abstract photographer and it’s hard for anyone to claim you are not. I like that. Very arty.

This entry was posted in Photography and tagged abstract photos, photography. Bookmark the permalink.

6 Responses to An Abstract View of Photography – Seeing the Light