Into the Wild West – Biking Day 2

After our rain-free first day on the West Coast Wilderness Cycle Trail last week, we had more rain overnight at Lake Kaniere. And it was still quite gray in the morning of our second day. We decided to ferry the vehicles to Kumara at the start of the day, and this was a good plan. There was plenty of rain coming and going via the coast, but by the time we got back to the house at the lake it was looking brighter. 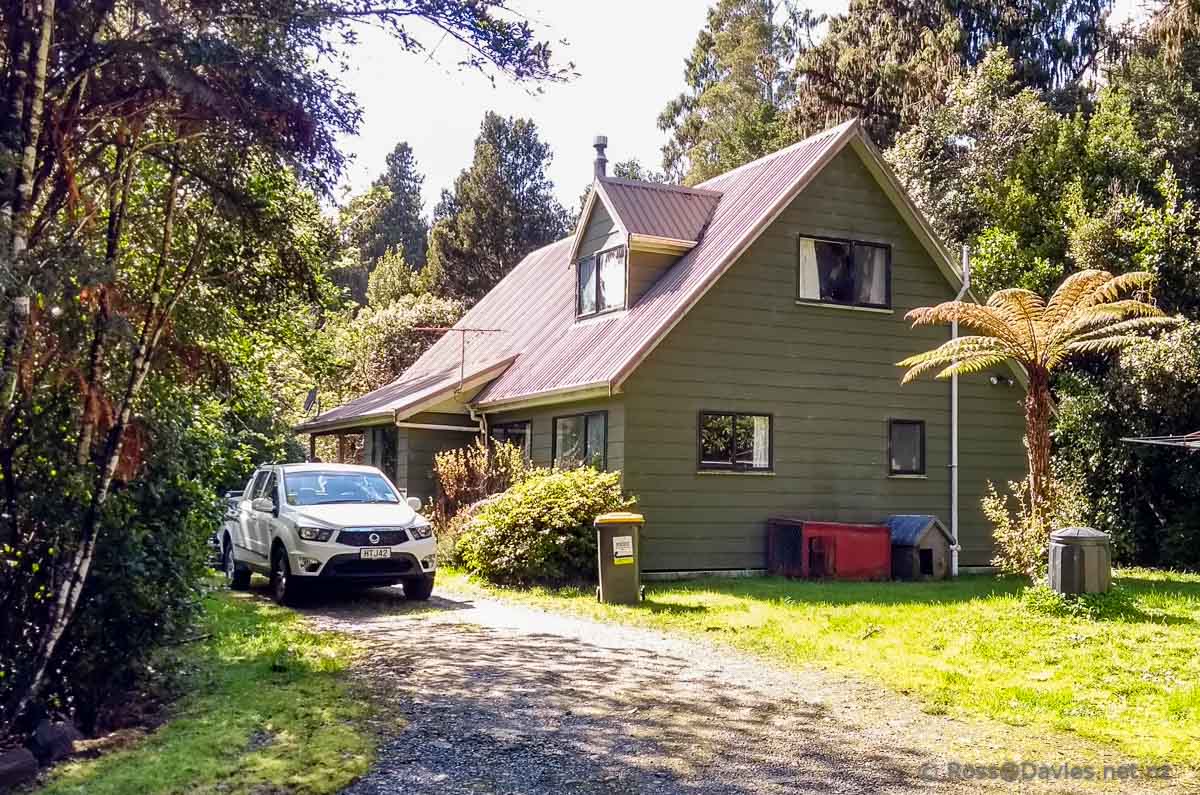 We set off relatively late, and from the lake the trail climbed mostly gradually up a hardly-used gravel road through some magnificent forest. We knew there was a saddle somewhere, and a descent to the Arahura River Valley, but we were quite unsure how it all worked. Eventually there was more down than up and then suddenly we were zooming down the road and out into the valley. We made the most of the down and even the ride up the valley was easy. 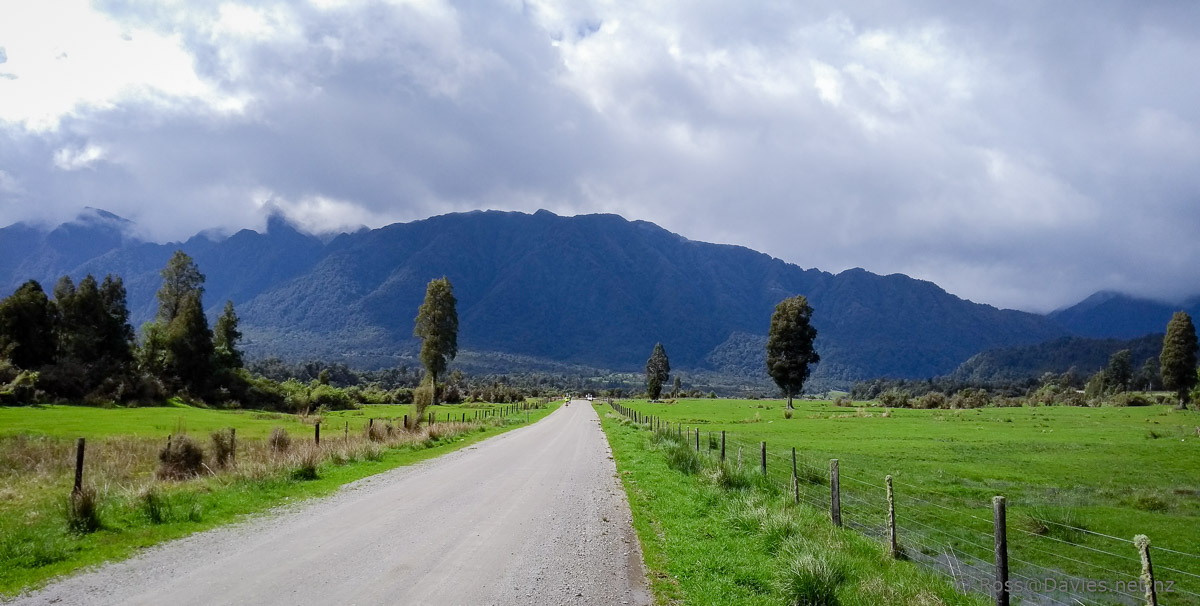 Heading up the Arahura Valley 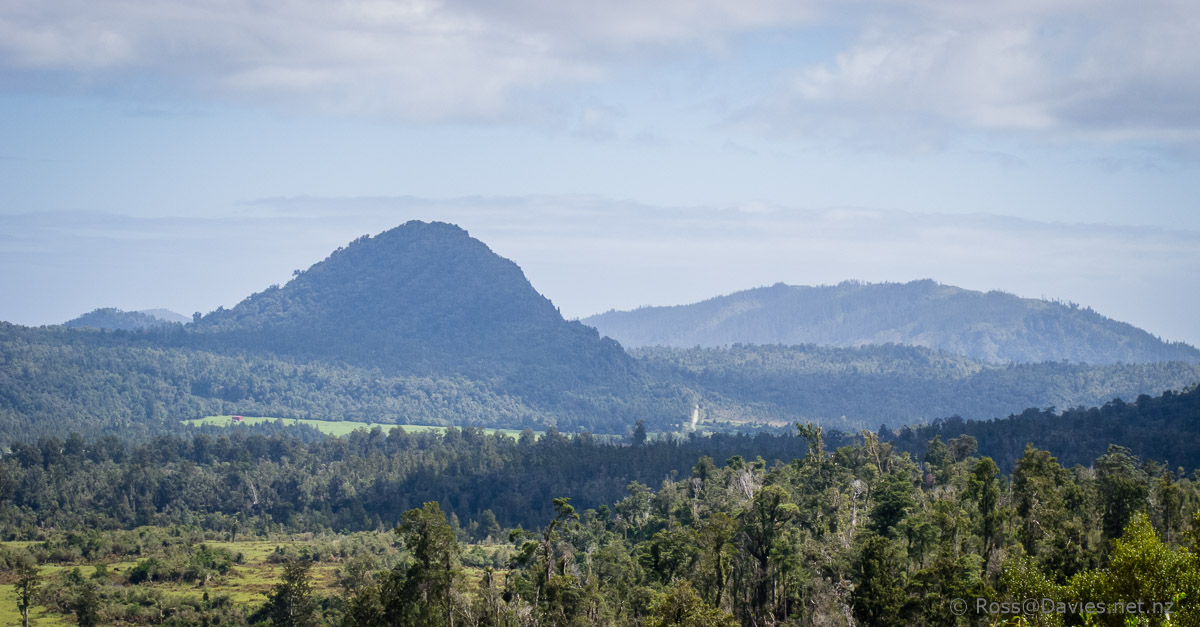 Looking back down the Arahura Valley. Lake Kaniere is behind the dark hill and the light line to the lower right of the hill is the road we zoomed down.

After crossing the bridge over the river, the trail left the road and headed upriver and then up a series of switch-backs and back into the trees. We thought briefly about putting rain jackets on at this stage and didn’t, and that was the nearest we came to rain all day. 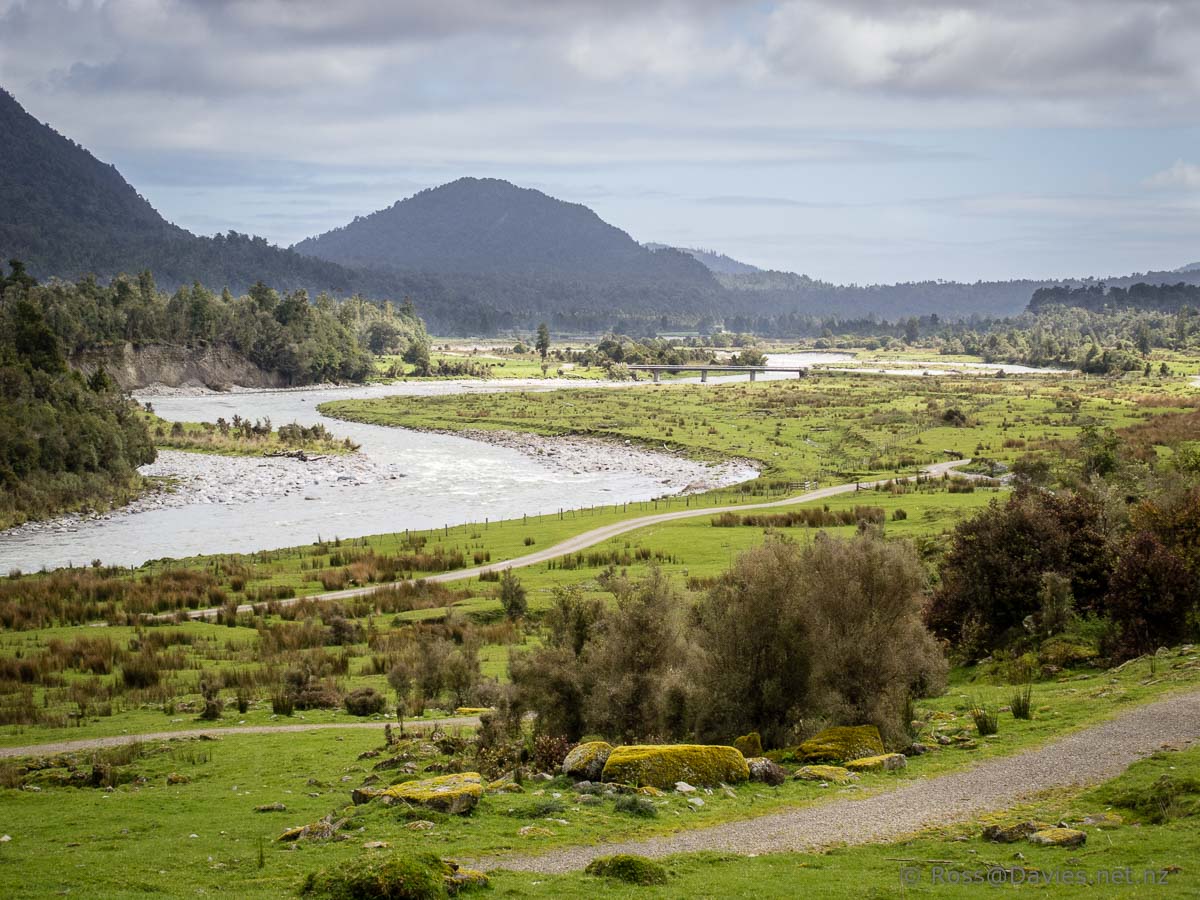 Looking back down the Arahura River from the start of the switchbacks. 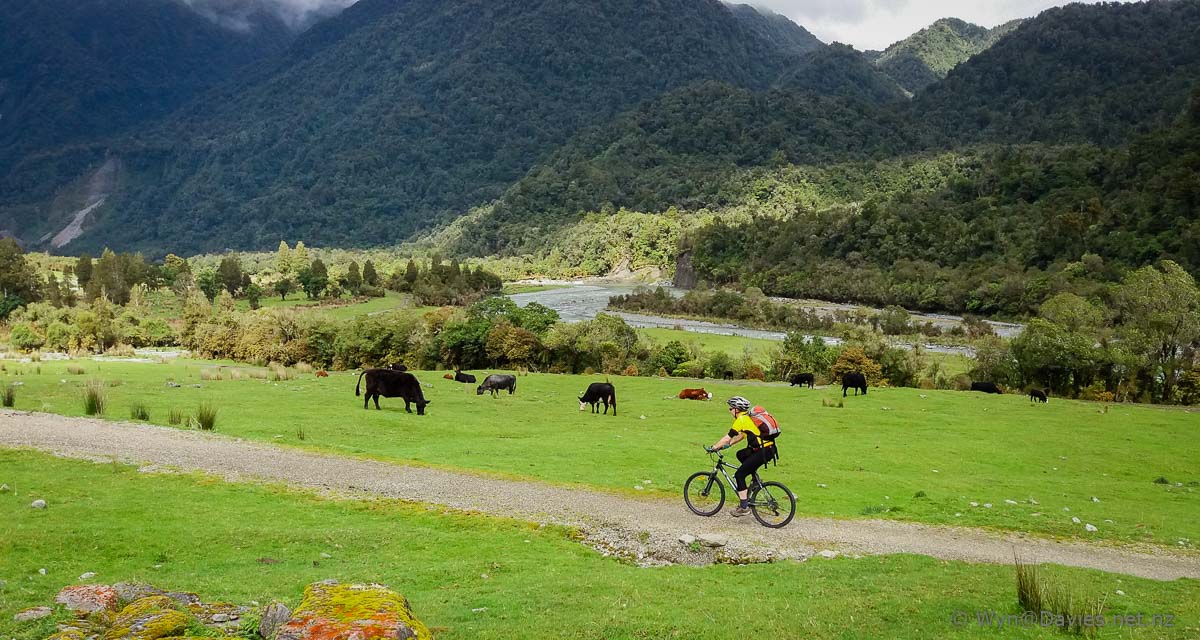 Starting up the switchbacks

Before long the trail emerged into a broad ‘street’ which was the main (and only street) of Cowboy Paradise, a one-horse, work-in-progress, sort of a place if ever there was one. 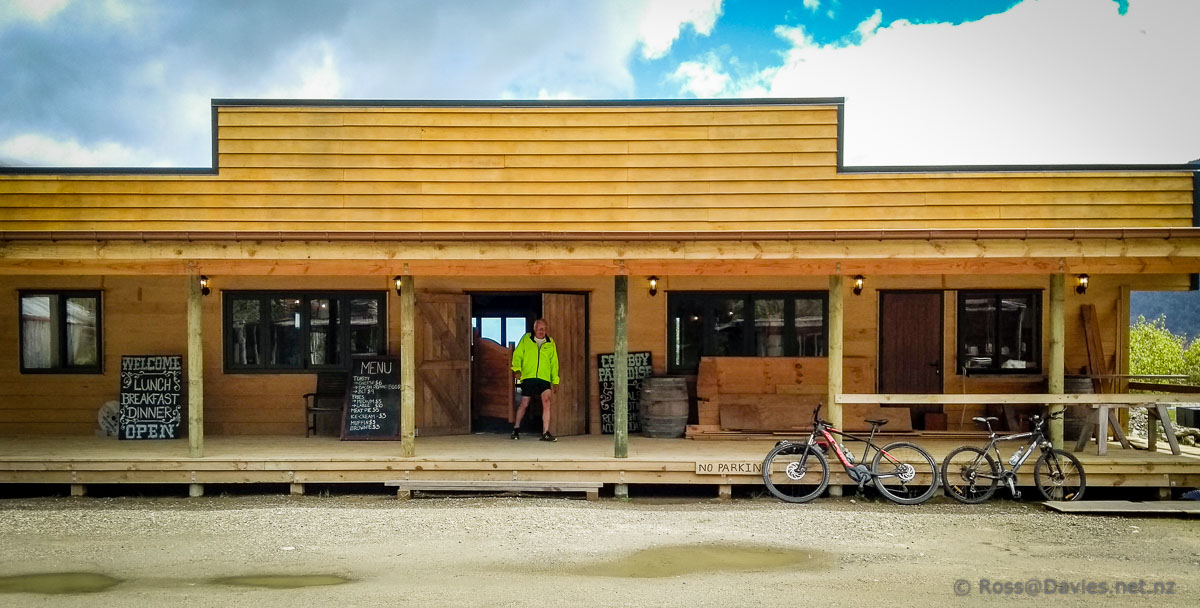 The Saloon at Cowboy Paradise.

The accommodation looked nice, and the saloon looked big. But there didn’t seem to be a lot of food available – there was none to be seen. But the boss was away that day and it was early in the season. I’ve heard that the food is well received by guests staying there. It was a good thing though that we weren’t relying on the establishment for lunch.

From there the trail disappeared back into the forest at the end of the ‘street’ as we headed for Kawhaka Pass. The trail from here on north is delightful with glimpses of hills through the trees and water races and streams going every which way. It’s the beginning of a comprehensive water scheme that feeds water for a long way north. 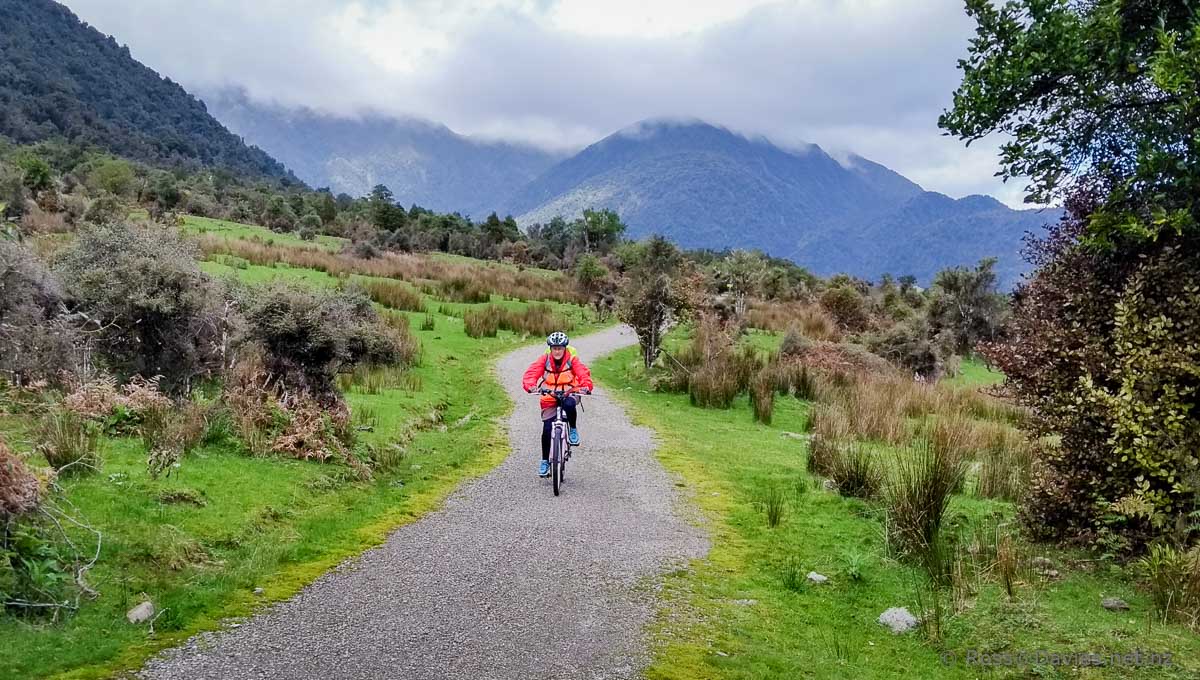 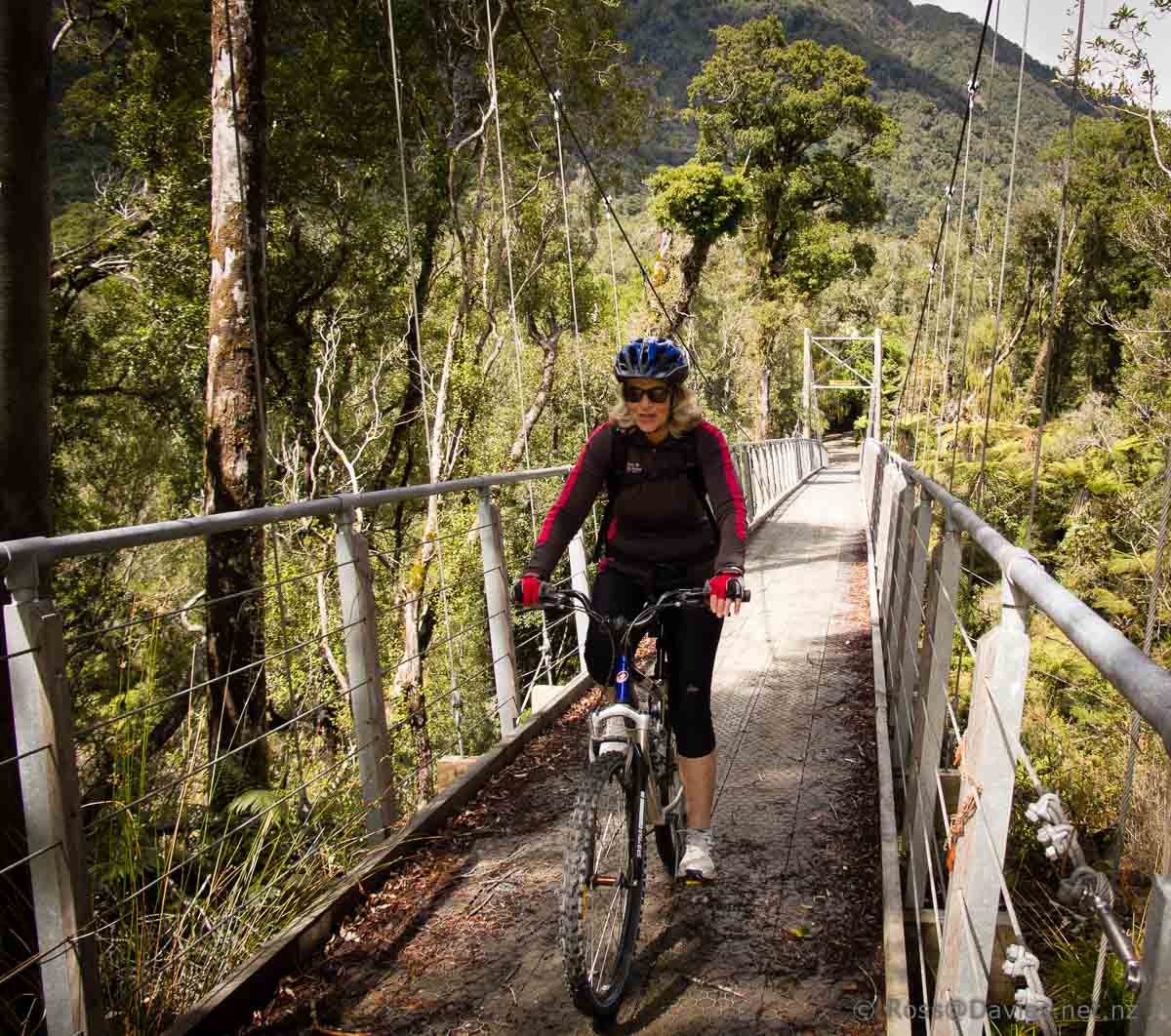 One of several impressive bridges

Eventually we came out onto another hardly-used road which we continued along, in search of the elusive pass. 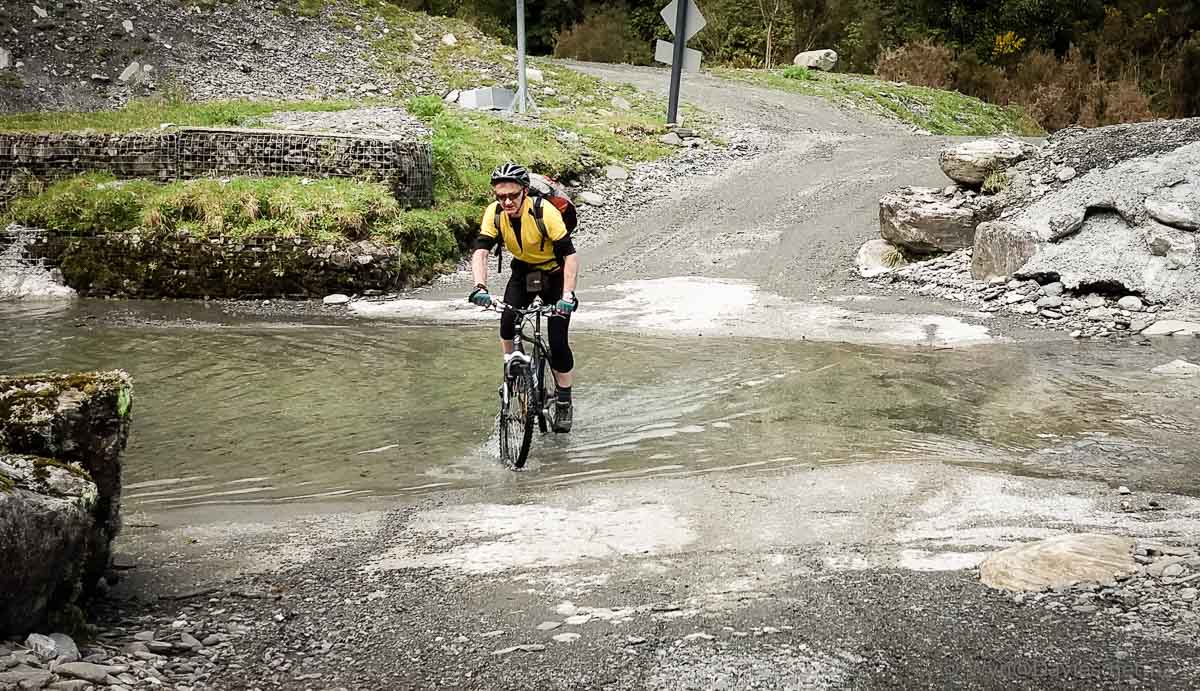 Ross crossing a stream, trying not to make a splash. At least I had remembered to change my tyres. 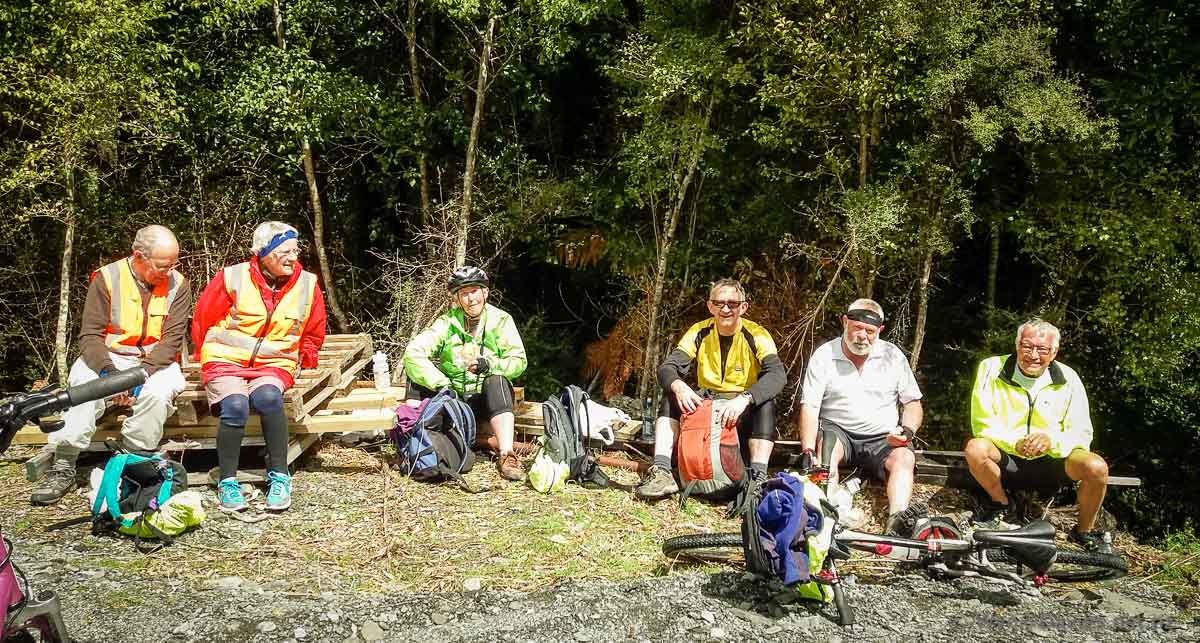 From here, there were more ups and downs, and then more downs than ups. Somewhere we crossed Kawhaka Pass, without knowing it. It would be nice to have a small sign to recognise the milestone. We enjoyed the zooming downhills, and when we saw a few bikers going the other way we were pleased to be doing it in this direction. 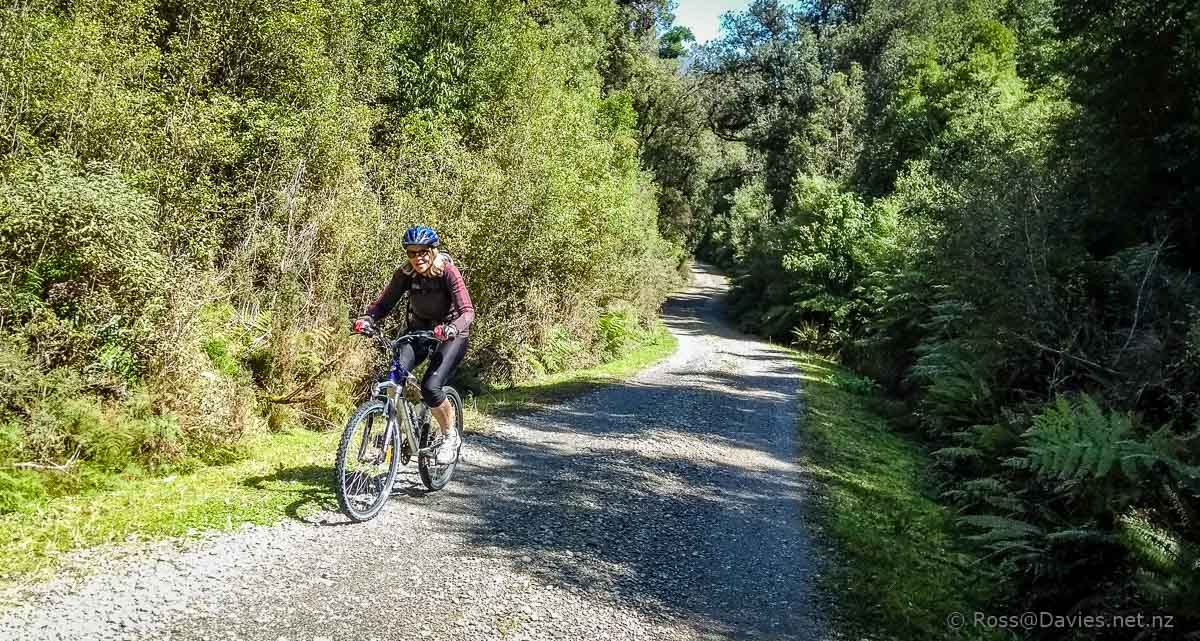 Pedaling up, going down the valley 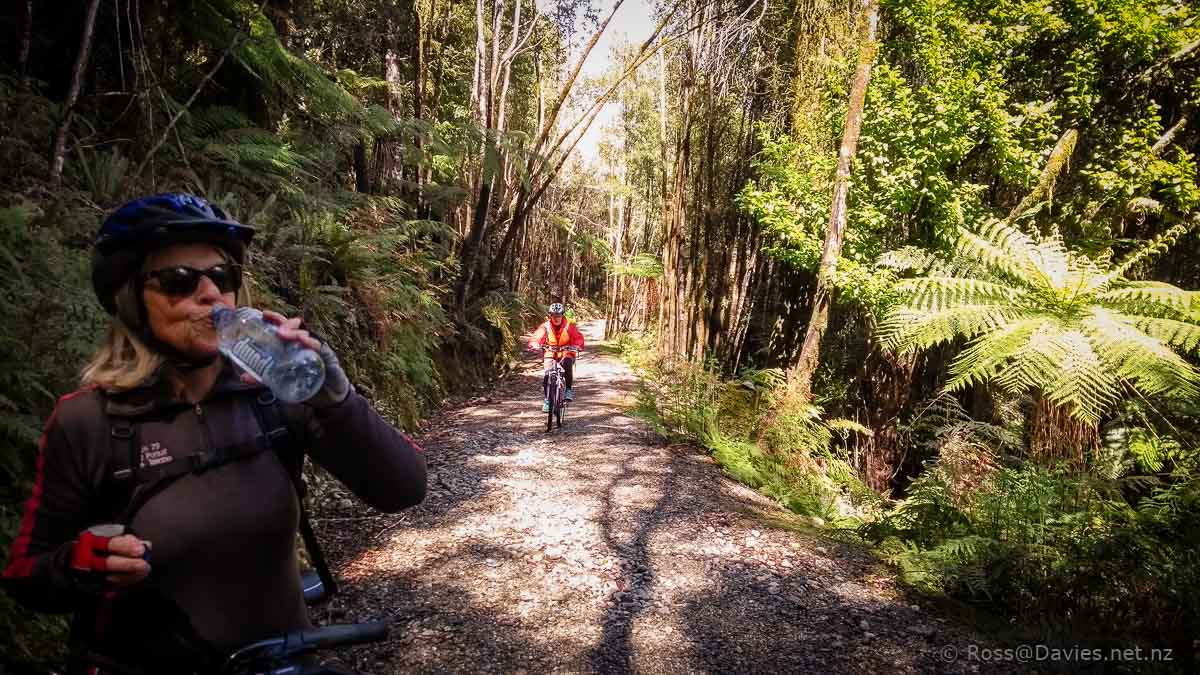 Wyn refueling on a nice bush section down the Kawhaka Valley

We came onto the Old Christchurch Road, and then a big water system with more of a canal than a water race. Via another mostly unused road we came out to the Dilmanstown Reservoir. This was initially a gold mining project and is now used for power generation. It is a large body of water,

Stopping for a break beside the Dilmanstown Reservoir

From here we followed a track that serviced the power lines and finally we came out of the forest in the back streets of Kumara. It wasn’t far to the Theatre Royal Hotel and the end of our ride. We’d covered 50 kms through the back of beyond and were pleased to rest our legs and seats. The hotel had nice rooms and we all enjoyed a lovely meal that evening in their dining room. Very civilised. A great way to end a great day.

2 Responses to Into the Wild West – Biking Day 2