Up The Coast – The Rest of the Wilderness Trail

Our last day on the West Coast Wilderness Cycle Trail dawned grey and threatened rain. We’d had a charmed run with the weather, and if we had to have some wet then this would be the day to have it. I enjoyed a quiet walk around Kumara first thing; doing a lot of reading of the various interpretation boards around town. In front of the hotel there is a whole series of them, with lots of different accounts of the early days. Kumara was another gold rush town, with all that came with that. The information is interesting, and it helps to slow us visitors down. 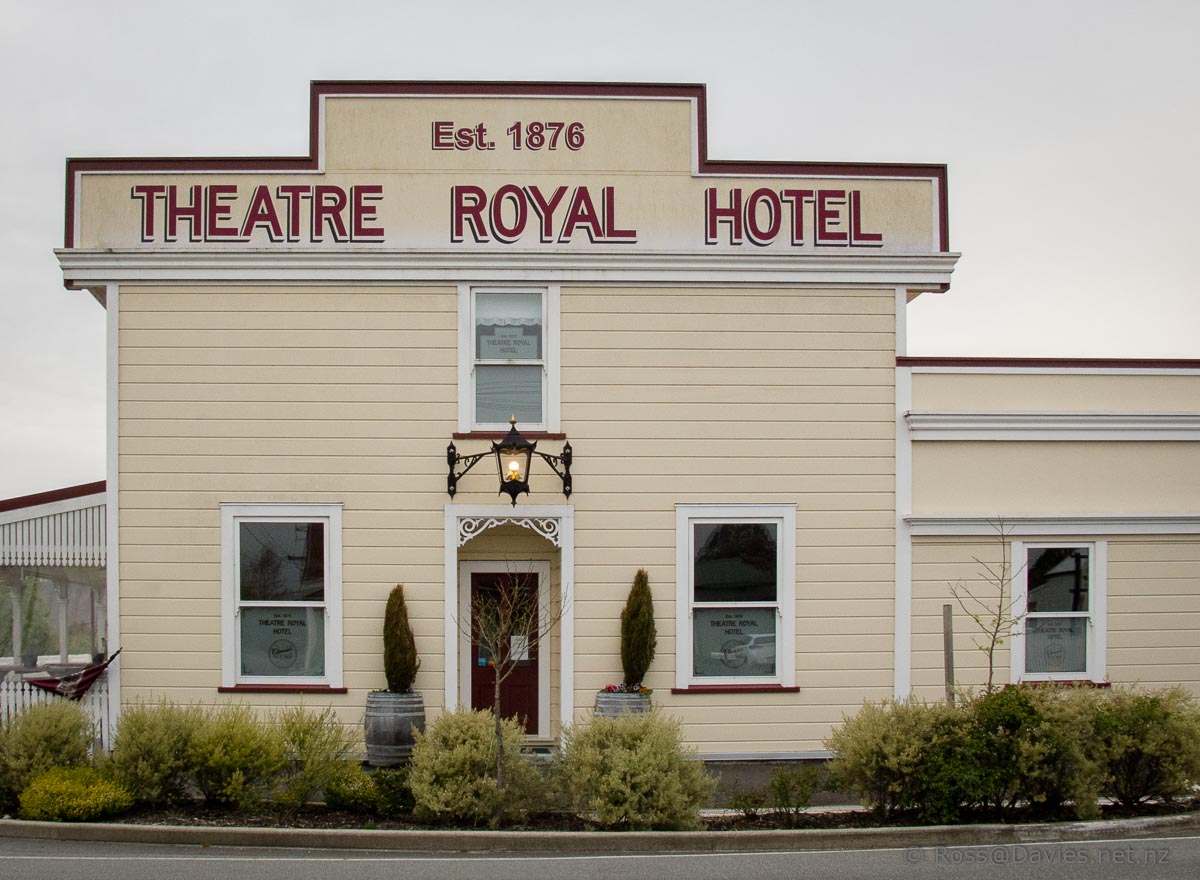 Theatre Royal Hotel Kumara – it really had been the theatre.

Kumara Hall. This is version 3. Imagine the stories this building could tell, if it could. 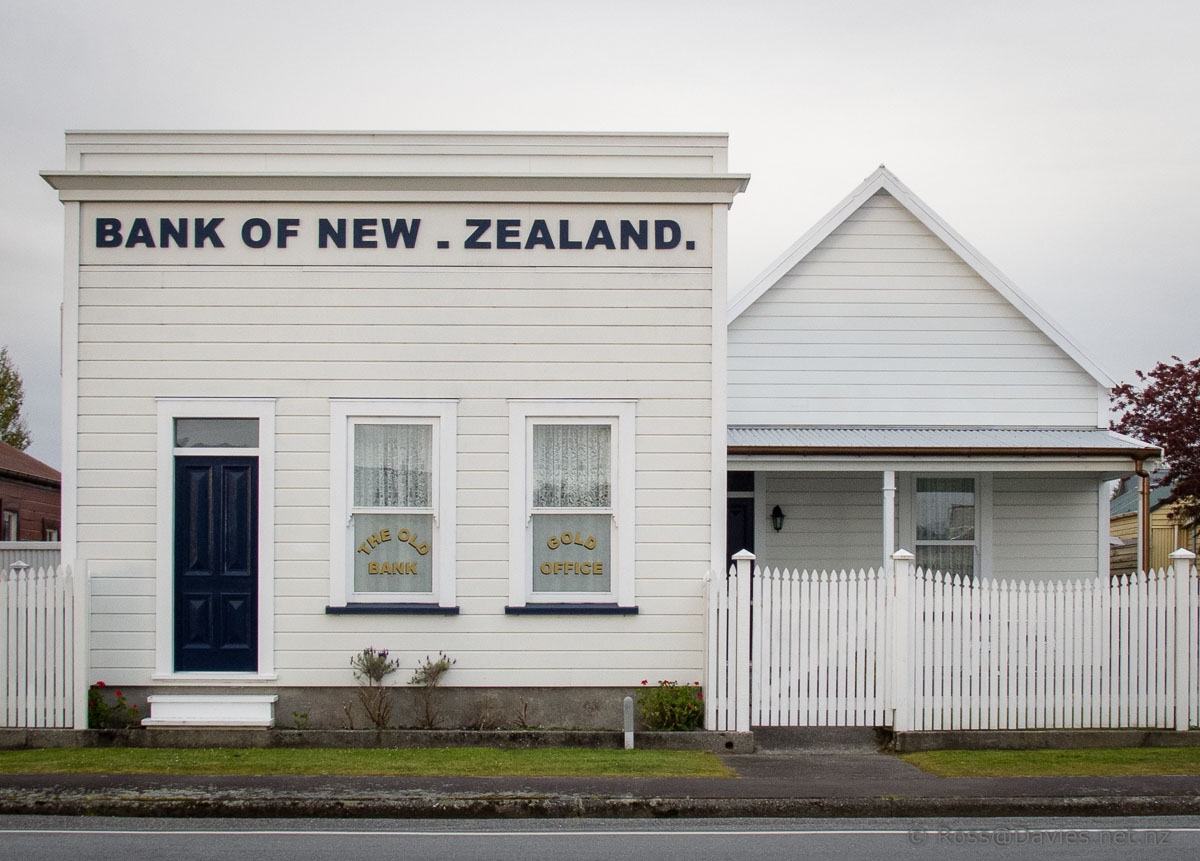 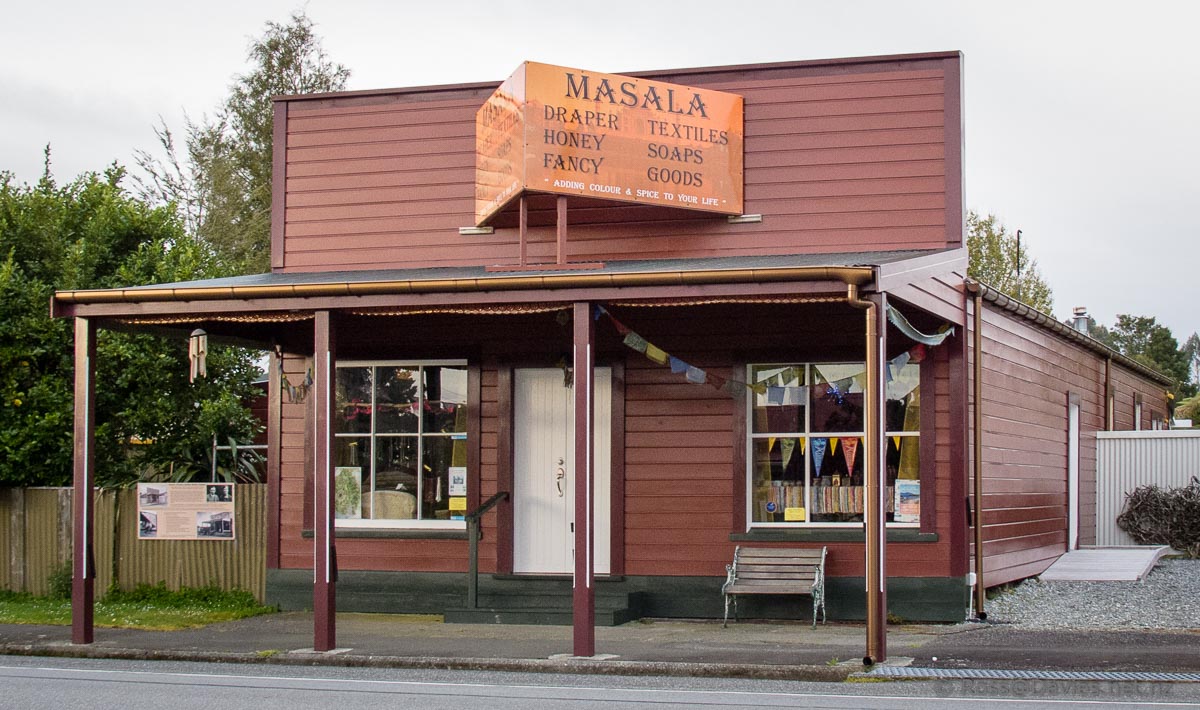 We ferried the vehicles to Greymouth first thing again. For us Greymouth was going to be the end of the trail, a mere 30 kms away. We needed a few more layers when we got going; it didn’t look like we’d see too much sun. 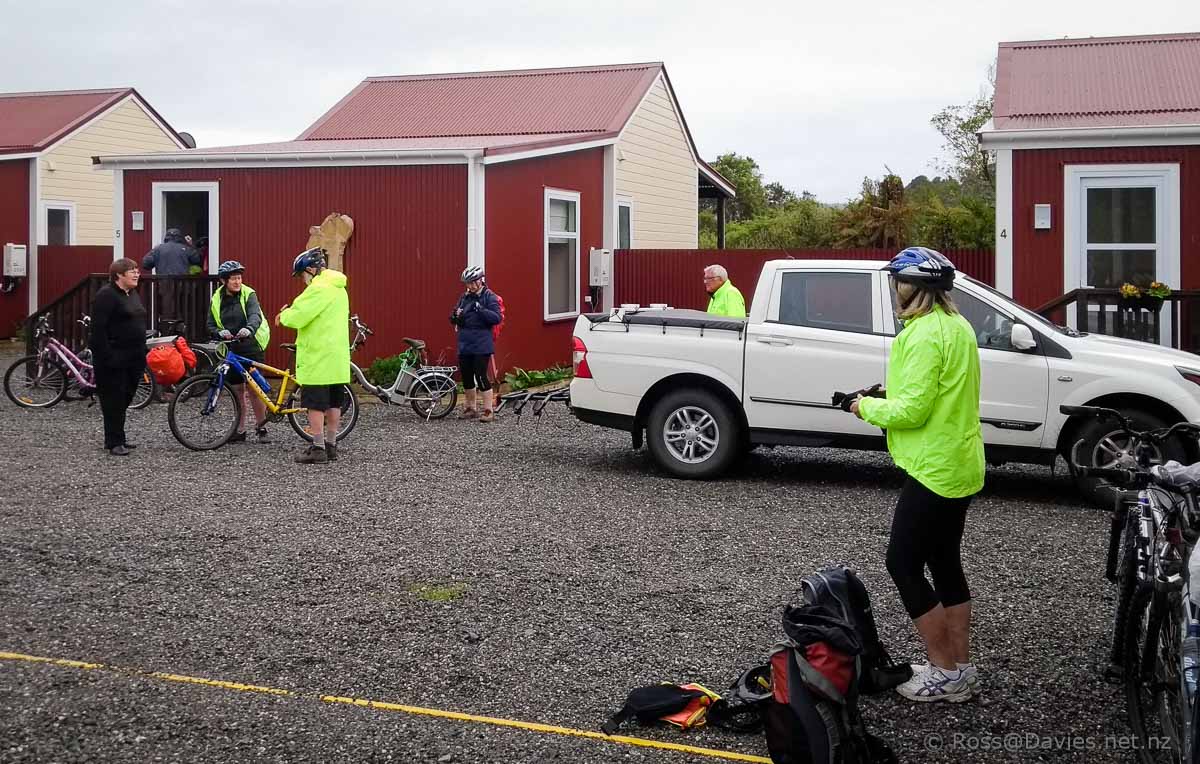 Saddling up in Kumara on the last morning, with a few more jackets and warm clothing.

I’d imagined the trail was going to be beside the highway for much of the way, but they’d done a great job choosing the route. It was quite a while before we even saw a road. 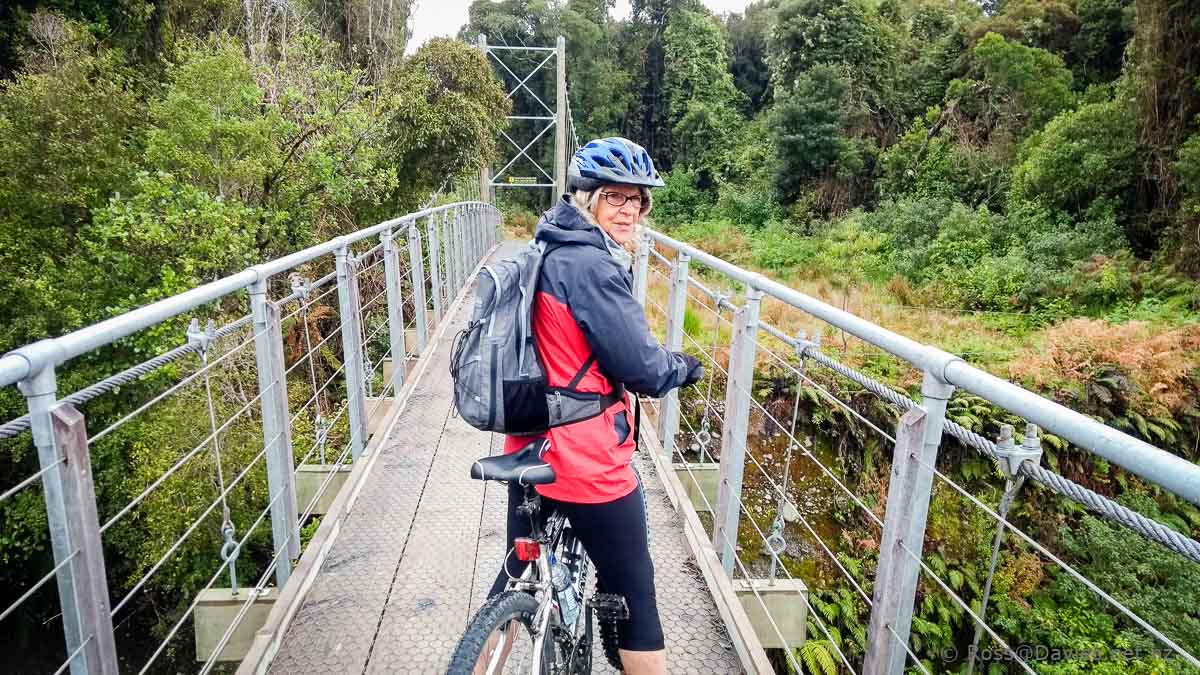 Big bridge over the Kumara Chasm 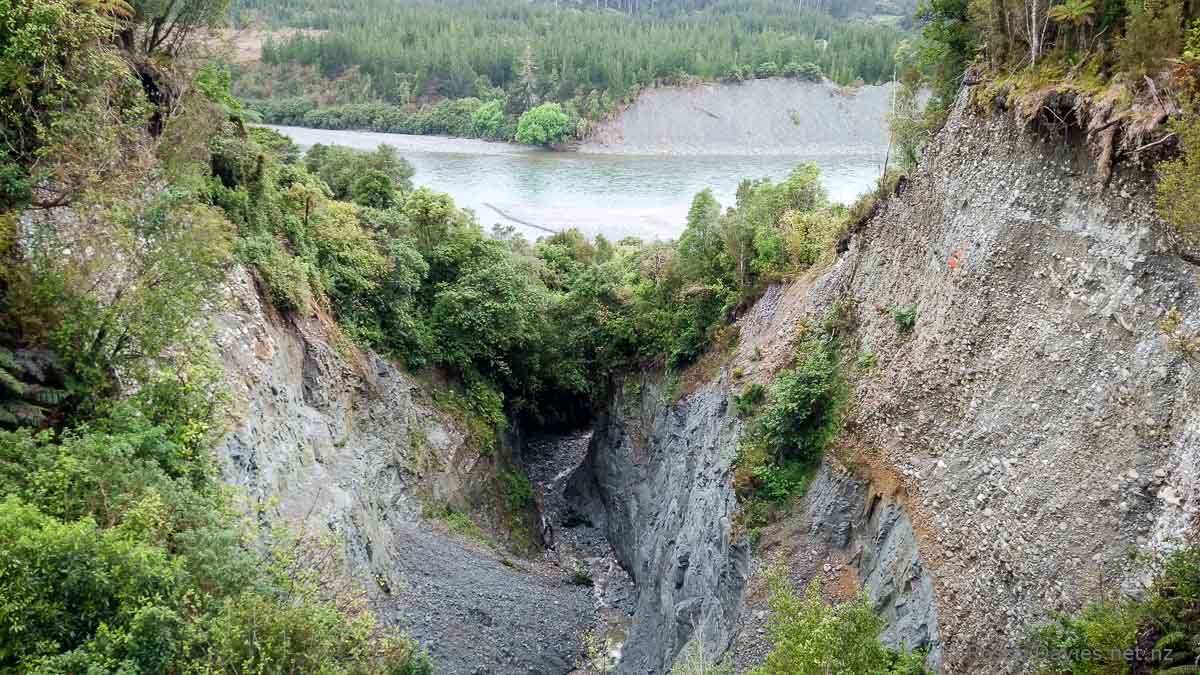 The Kumara Chasm and the Taramakau River

From there the trail headed through some lovely forest, cutting the corner towards State Highway 6. It didn’t reach SH6 until near the bridge over the Taramakau River. 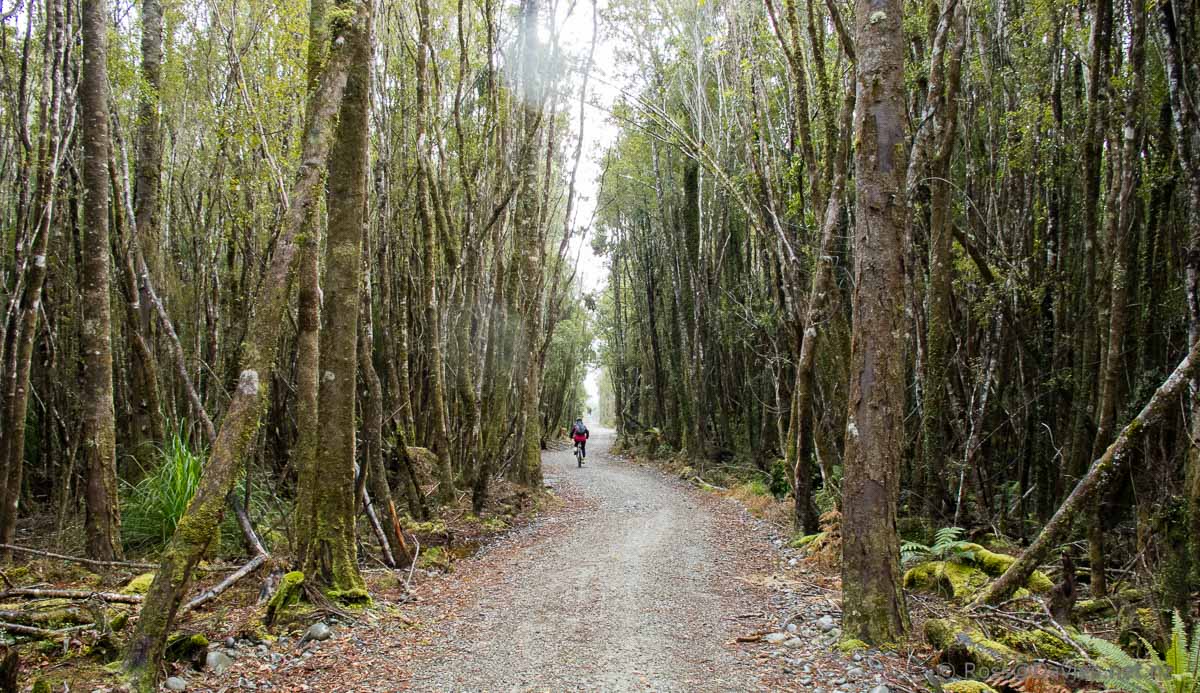 Another forest section of Wilderness Trail near SH6

We finally came to SH6, just before the Taramakau River bridge. This is a famous one; where the single-lane bridge is shared by traffic going in either direction, plus the railway line. Luckily they’d realised that adding cyclists to this mix was not going to end well, and they’ve build a nice clip-on extension for walkers and bikers. There’s big workings going on now, with a replacement bridge finally being build. This will separate the road users from the trains, and allow for traffic in both directions at once. 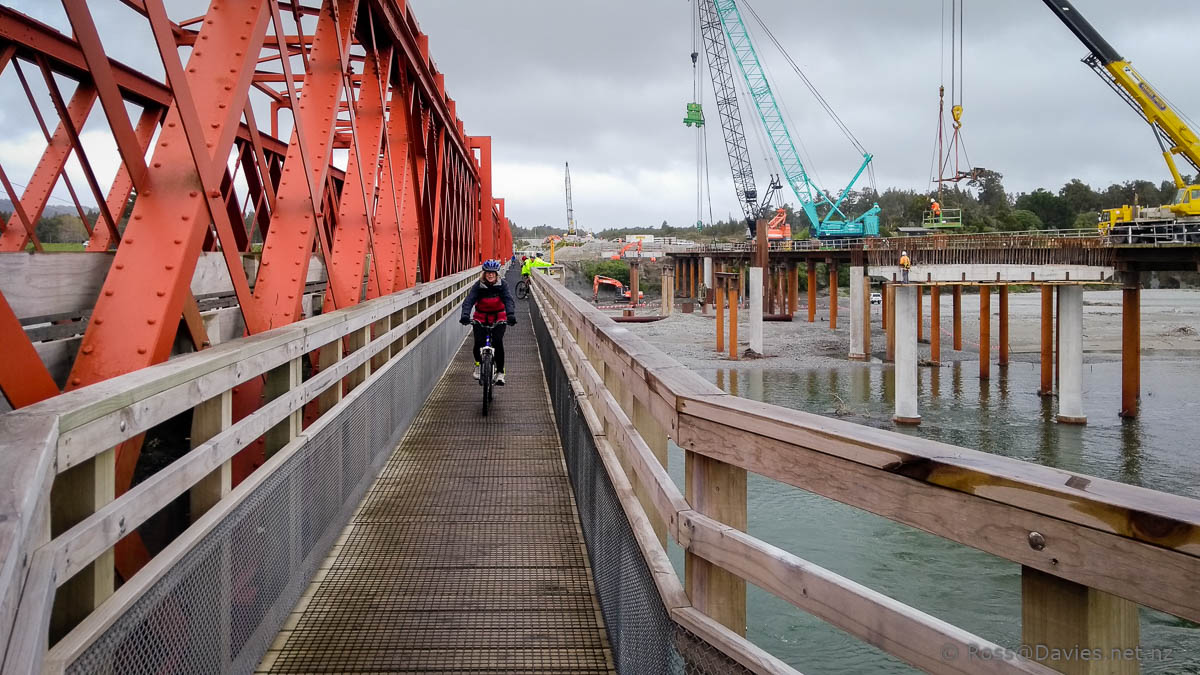 Biking over the Taramakau River bridge.

After this the trail was on the ocean side of SH6, sometimes close to the road and sometimes closer to the sea. Generally it was pleasantly coastal. What wasn’t so pleasant was that the day was getting a bit damper, and so were we. Mostly we just pushed on towards Greymouth.

Regrouping at an information pull-off for cars and bikes. It was always interesting to understand how the early explorers had moved around. Travel must have been endlessly difficult.

It took a long time to reach the end, but reach it we did. Getting wetter meant we were pleased to get there, and to be able to finally rest our legs and saddles. The end for us was the start of the trail for most people, with many coming from the east coast via Arthurs Pass or the train. It does seem a bit presumptuous though that both sides of the official start/finish are marked as the start. 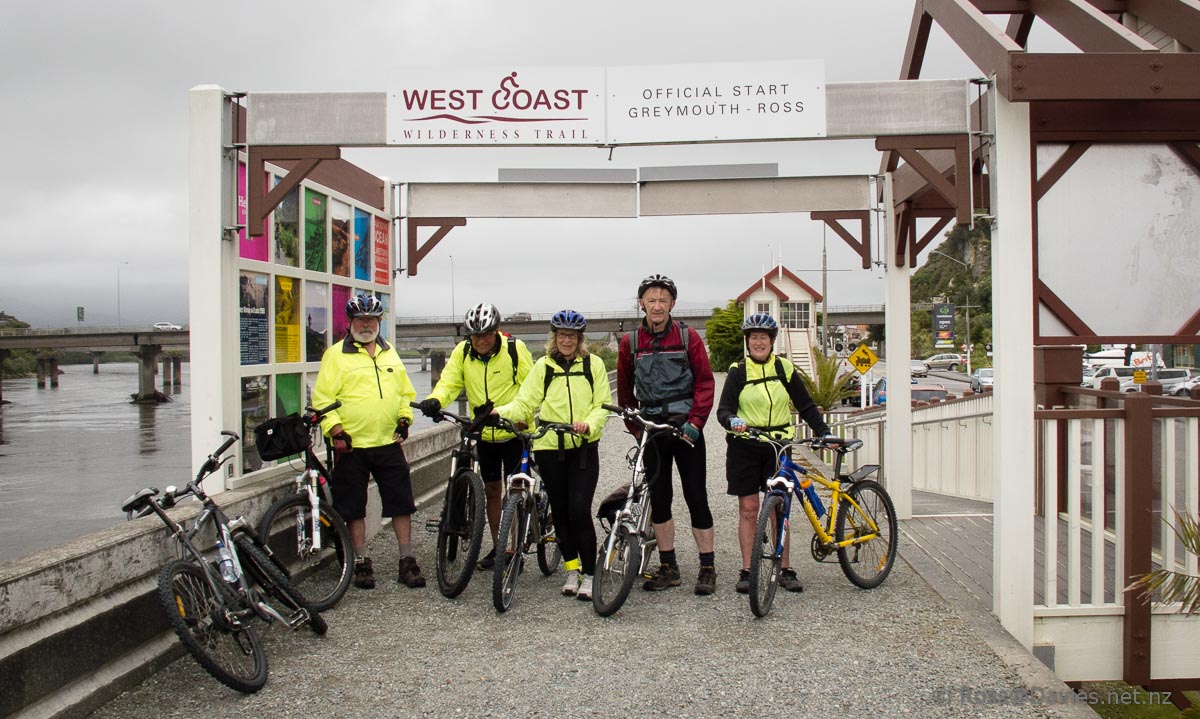 The end of the Wilderness Trail, despite the signage.

We may have done the trail the ‘wrong’ way, but this direction certainly suited us and our three-day staging. It seemed to us to be an easier direction as well, with more gradual climbs the way we went. Even the official maps suggest doing the Kumara – Lake Kaniere section in reverse when going north to south. That just seems weird to reverse a whole chunk when generally going north to south.

We were happy to finish what was probably 140 km of riding; feeling very satisfied with our luck with the weather and just getting there. It was a wonderful adventure with an adventurous bunch. We were pleased to get into some dry clothes and headed to a nearby cafe for lunch and a debrief. Then all the others headed off back towards Arthurs Pass and Dunedin and we prepared to head south down the Coast for the rest of the week.

When I went to load Wyn’s bike on the bike rack I realised that her back tyre was completely flat. It was the only puncture of the whole trip. All we could figure was that it had happened crossing the carpark to where the vehicles were parked. How lucky can you be?