From the Beginning – Our Grand Tour Starts

We came from New Zealand. I’d always wanted to. I’d sort-of headed off round the world forty-something years ago, but only got half way. Wyn was planning her first trip 12 years ago when I met her. I was allowed to stalk her around Europe via webcams and Google, and I made her promise to take me back to Paris. And she wanted to show me London. We distracted ourselves a few times over the years, but kept dreaming. And then started working out how to make it happen. We’re now almost three weeks into our dream, and still mentally pinching ourselves and reminding ourselves that this is real.

Europe is a long way from NZ but who are we to grumble when you consider the earlier travellers of a hundred years ago. What would they make about us whinging about two 12-hour legs in Economy? We had a particularly non-harrowing journey, although we weren’t in quite the right health to enjoy it. Wyn had been battling a nasty head-cold for over a week before we set off but was starting to get on top of it. I was feeling smug about being healthy but my turn was to come.

The weather in Dunedin was horrible when we left back in May. Cold and wet, with snow half-way down the Maungatuas opposite the airport. We felt like Winter was giving us a good send-off. 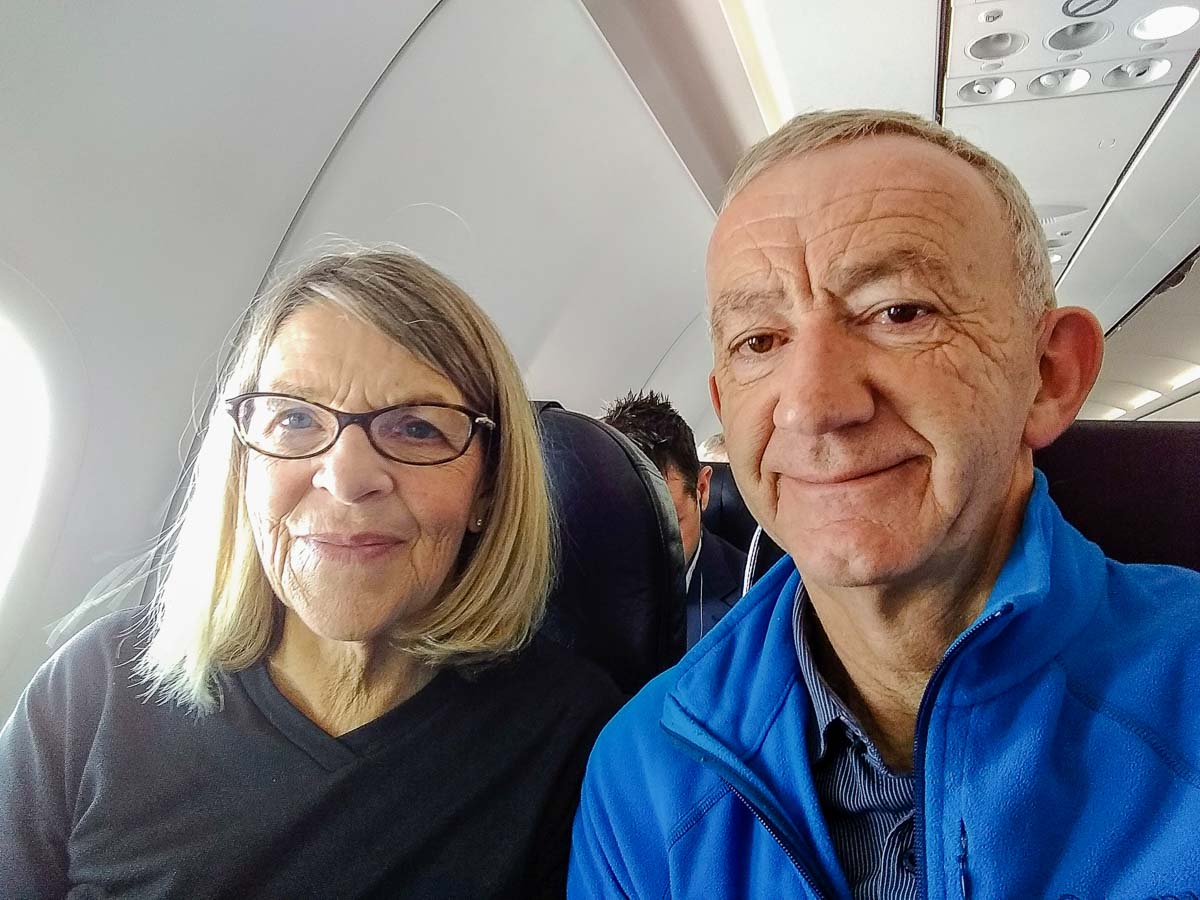 Leaving Dunedin. Finally, everything that was going to be done was done, and our big adventure (aka Our Grand Tour) began.

We had a lovely (but cold) afternoon in Auckland with my cousins Jan and Mike, and then settled into our first AirBnB experience in Mangere. We had our first UberEats meal that evening and then our first Uber ride to the airport in the morning. So many firsts and we still hadn’t left NZ.

It was a cold and damp morning for leaving Auckland. It seemed like we were escaping Winter just in time. 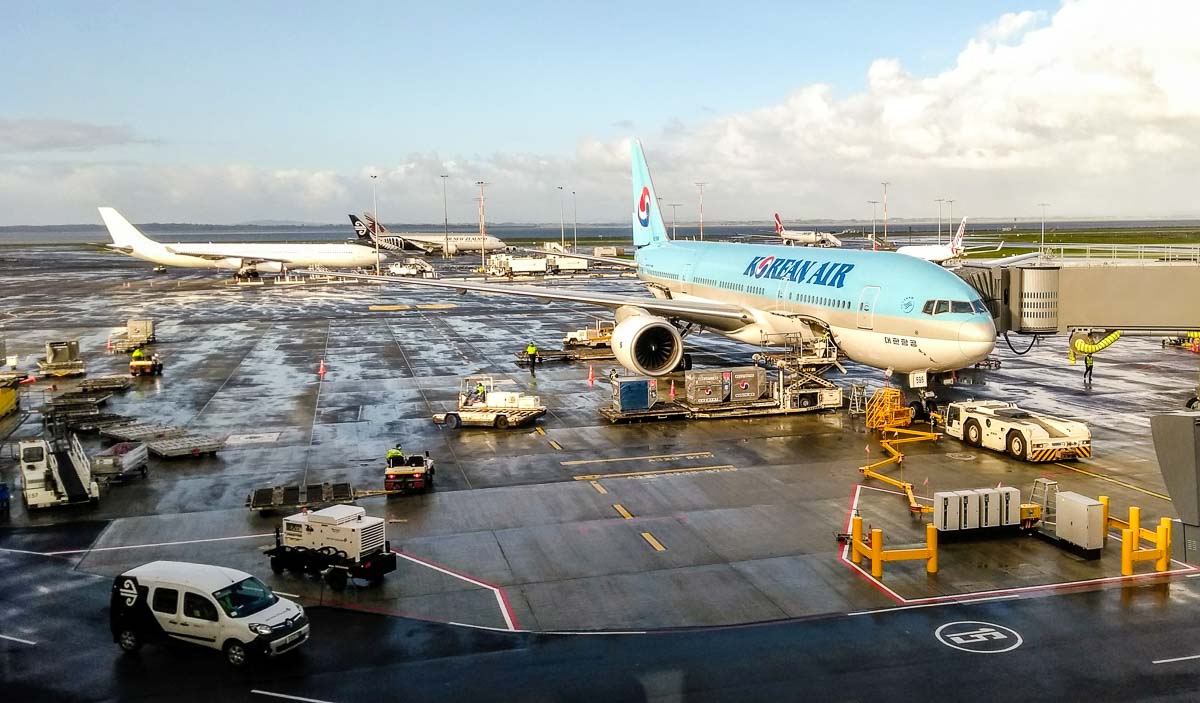 Our Korean Air Airbus getting ready to transport us to South Korea.

Korean Air was great. There was more room than on our previous international flights with Air Asia and Air New Zealand. I didn’t feel scrunched. The service was good and the entertainment thingie worked. I enjoyed watching The Post with Tom Hanks and Meryl Streep and Wyn tried to sleep. It was a new experience flying through the day, but it seemed more natural somehow. But a 12-hour flight is still a long time, and we were pleased to land at Incheon Airport at Seoul in South Korea at the brand new Terminal 2. 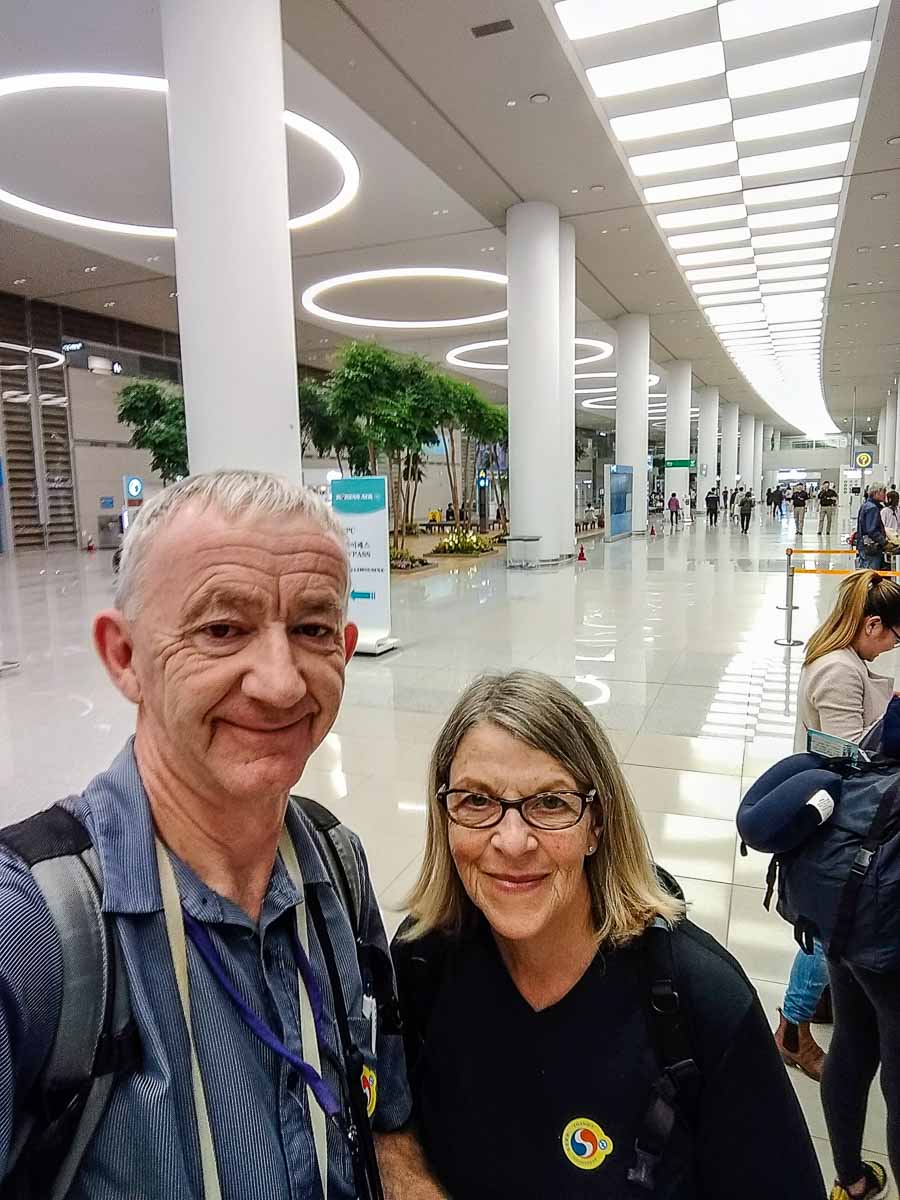 Us a bit the worse for wear in Terminal 2 at Incheon Airport, Seoul, South Korea

We landed in the evening, Korea time. And the deal with Korea Air is that they provide hotel accommodation for passengers with long layovers. So we got a night to sleep, and dinner and breakfast. We’d hoped to get their flash hotel but instead got a new one not far from the airport called the Golden Tulip. It was still in its first year, and perhaps a work in progress. Our room had puddles of water in the bathroom and a kettle for making tea with no nearby plug to use it. They swapped us to another room next door with dry floors and a plug for the kettle where you’d expect. Finally, showered and relaxed, we headed back to the foyer for what passed as a dinner meal. It did seem like the kitchen had given up for the day, which seems curious for a hotel servicing a busy international airport.

I didn’t sleep as well as I had hoped, I was coming down with the head cold that Wyn was seeing off. Breakfast was much better than dinner; there’s nothing quite like an Asian buffet breakfast. Chatting with some fellow travellers, Wyn found out that there was a walk in the park opposite the hotel, so we set off to make the most of the morning. 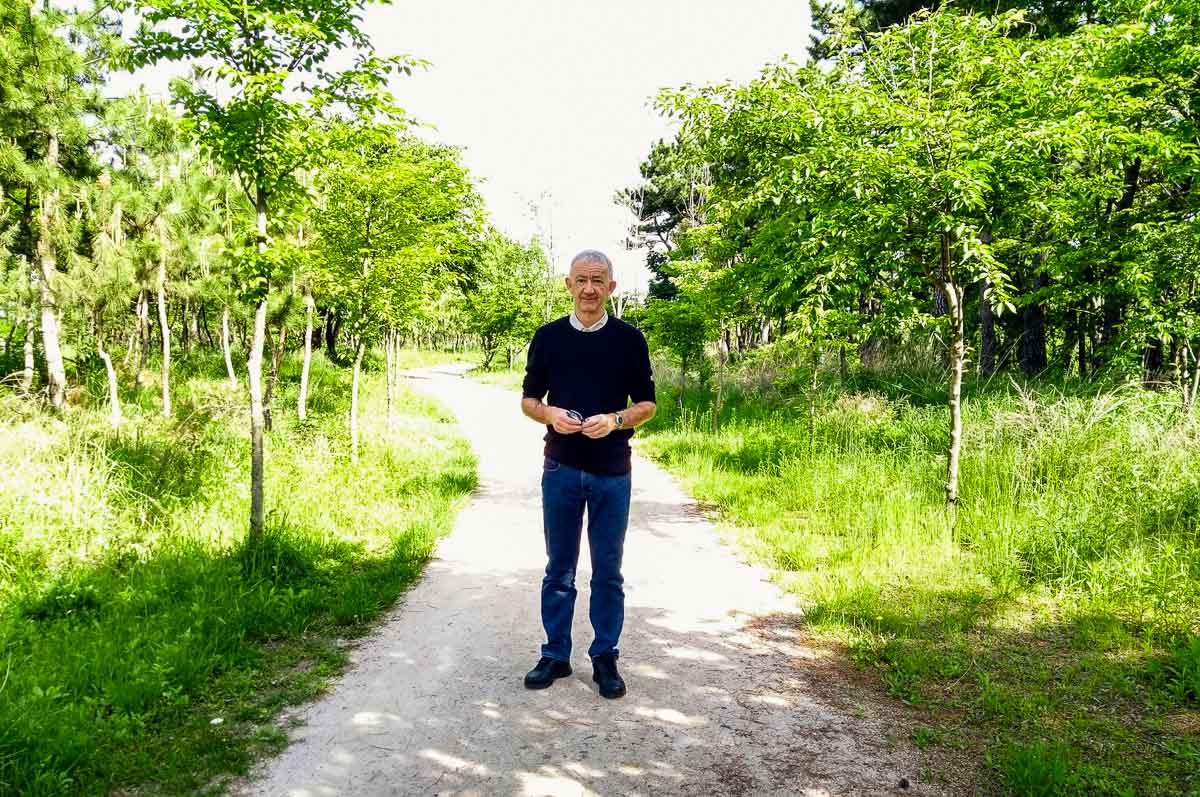 Walking in an Incheon park. The temperature at 9am was very pleasant. 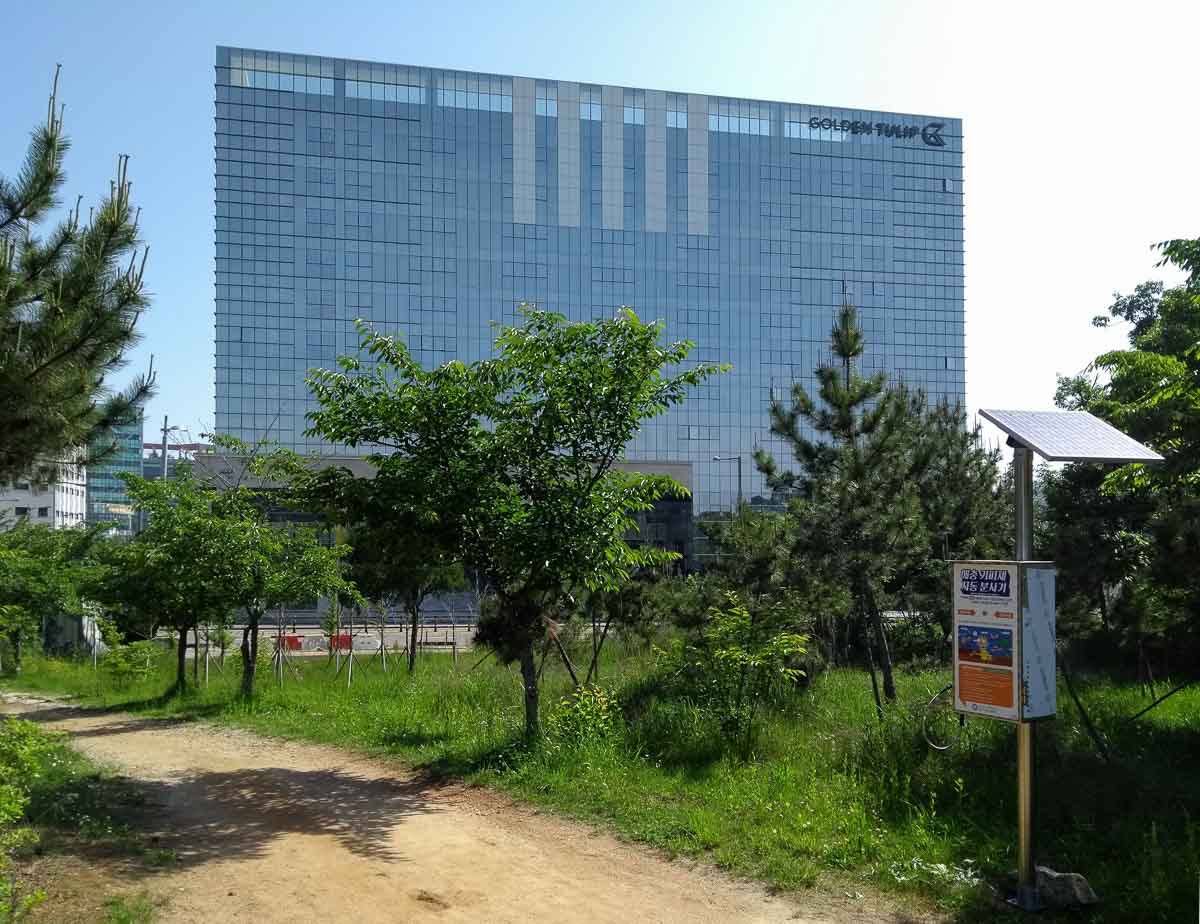 The Golden Tulip Hotel in Incheon, from the park. The box on the post was a solar powered automatic insect repellent dispenser. Which was more worrying than interesting. 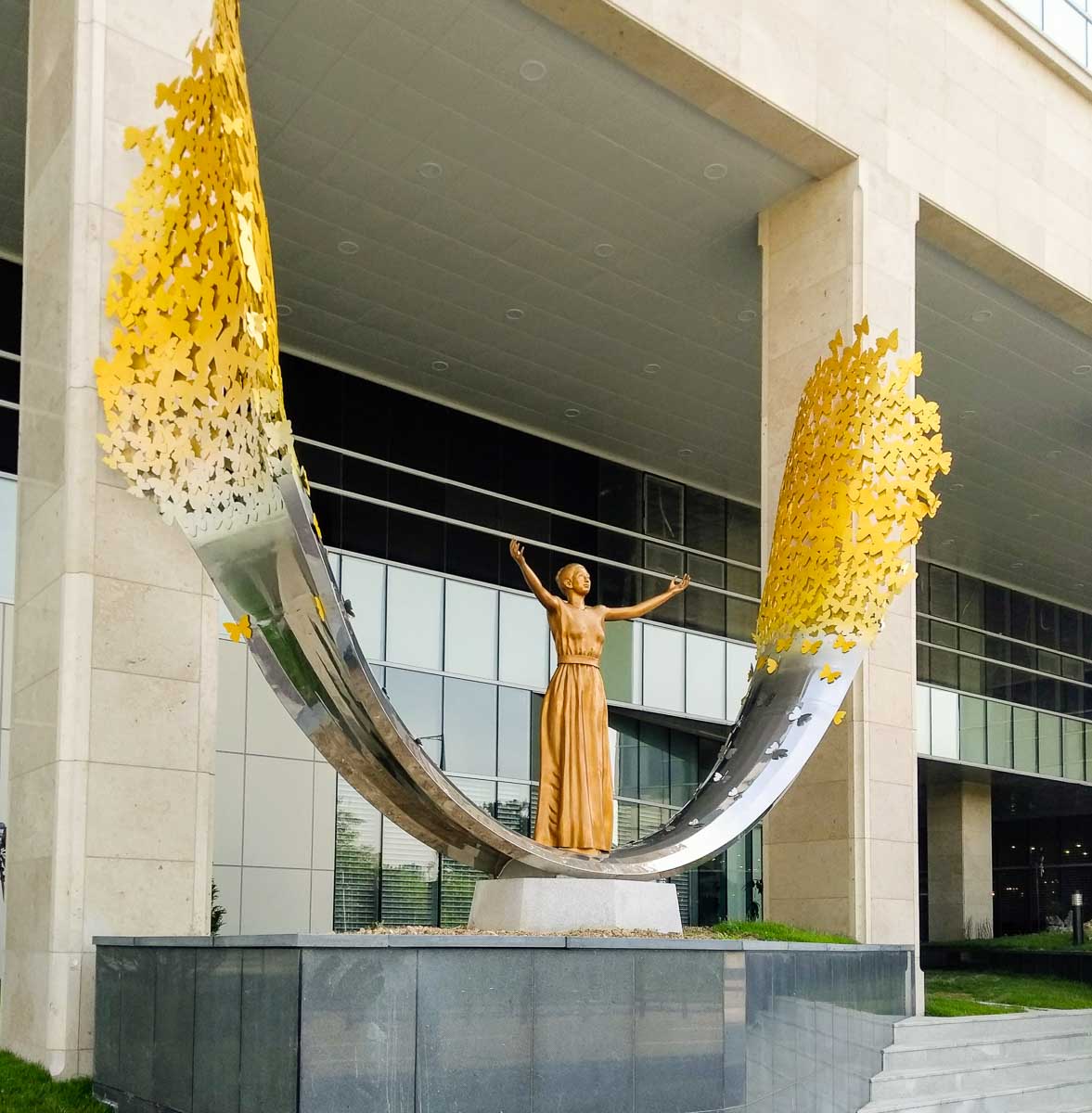 The dramatic entrance to the Golden Tulip Hotel 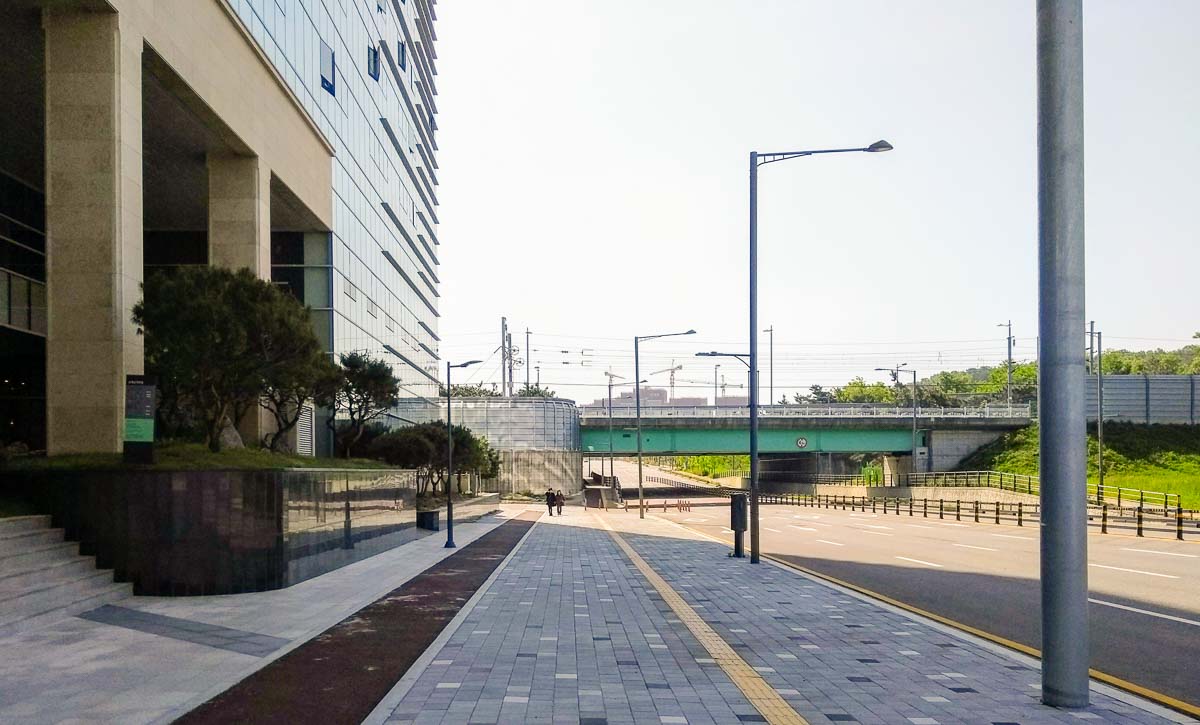 The road in front of Golden Tulip Hotel at about 9.30am. There were a few vehicles but it seemed like the whole area is waiting for something to arrive.

The hotel seemed like it didn’t really care about guests; maybe we come regardless, delivered on a conveyor belt from the airport. The puddles of water in the bathroom, the power plugs in the wrong places, one small-size bathrobe (of a harsh material that reminded me of that sisal floor stuff that was all the rage back in the 1980s that left patterns on your skin if you sat on it) for two guests, the evening ‘meal’. We loved the night’s sleep, and we were brought up to not look a gift horse in the mouth. But …. it could so easily have been a lot better. The most glaring omission was the lack of guest information in the room. There was nothing to explain anything. Not a sausage. Nix. OK, we are big kids and can probably figure out how to fill the kettle from the bathroom sink and boil it on the bedside table and that there is more than one way to the lobby. But there was one thing that really needed some explanation… 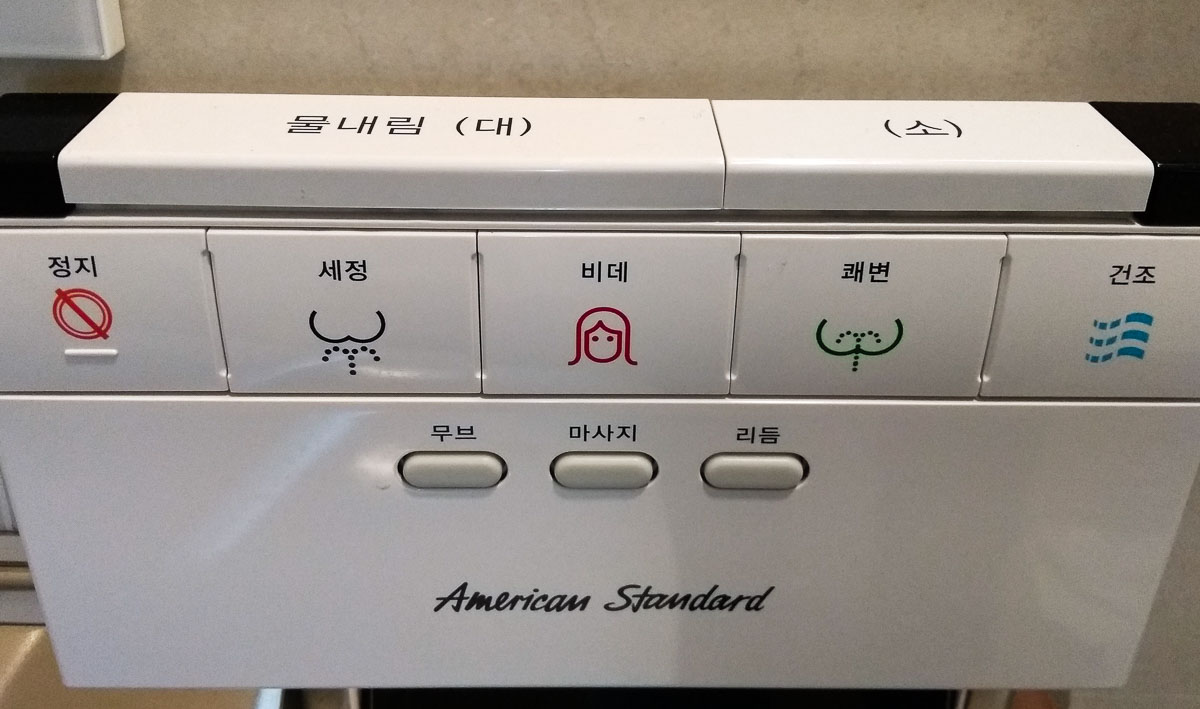 The options for flushing the hotel toilet seemed many and varied; and potentially invasive. My guess for the red button on the left was “Do not press this button” I didn’t!

In the bathroom was some sort of toilet thing with a control panel with lots of buttons with Korean labels on. OK, we were in Korea, but this was a hotel servicing an international airport that is a major international hub. Jeez, we just wanted to know how to flush the thing! Obviously it could do lots of other things, things we didn’t even know needed doing or could be done. But we were tired, and Flush was all we needed! Luckily I cracked it early on. Having sat on the seat, and then stood up, to my surprise it flushed automatically. Woohoo! No more worries about jets of water or gale force winds in private places.  From then on I used it sitting down and could relax.

Later in the morning we were shuttled back to the airport. In a bus with a cracked windscreen. The other passengers seemed concerned about it; it was more smashed than cracked. Like someone had thrown a rock at it. But we were relaxed; maybe it was our experiences in South East Asia and China that taught us not to sweat the small stuff? Anyway, we didn’t mind. We kept saying “Today’s the day we’re going across the world to see Noddy”. (Does anyone remember that old Noddy joke?)

Incheon Airport Terminal 2 is very new and automated. Not only is there self check-in, there is also self baggage check. There were diagrams of how to unpeel and attach the sticky label, but I managed to muck it up. Luckily there was someone hovering to sort out the idiots. We had plenty of time although Wyn kept reminding me how far we had to walk to get to our plane. 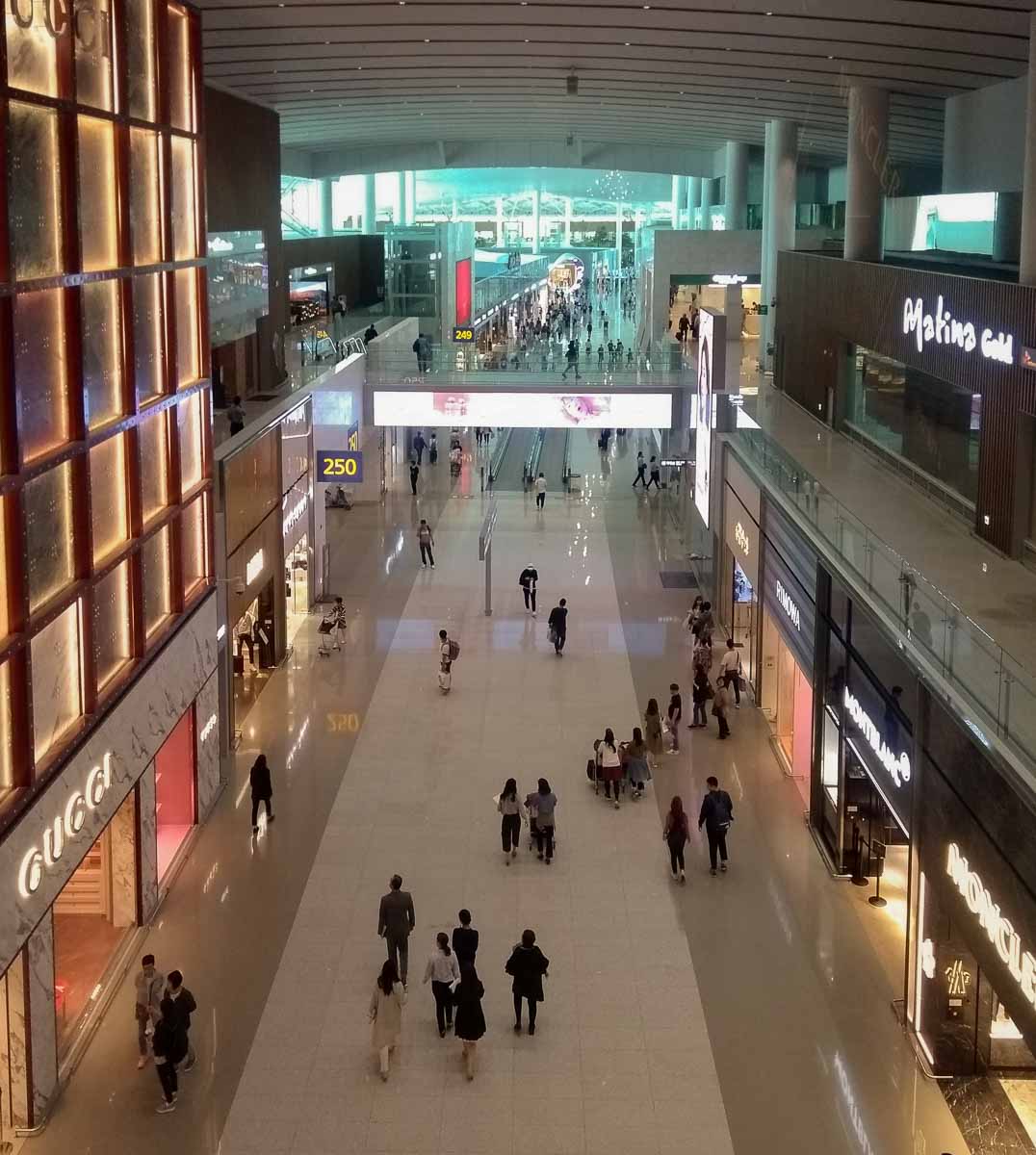 She’s a big place Terminal 2 at Incheon Airport. There’s a couple of shops, a bit of duty-free and a few cafes. 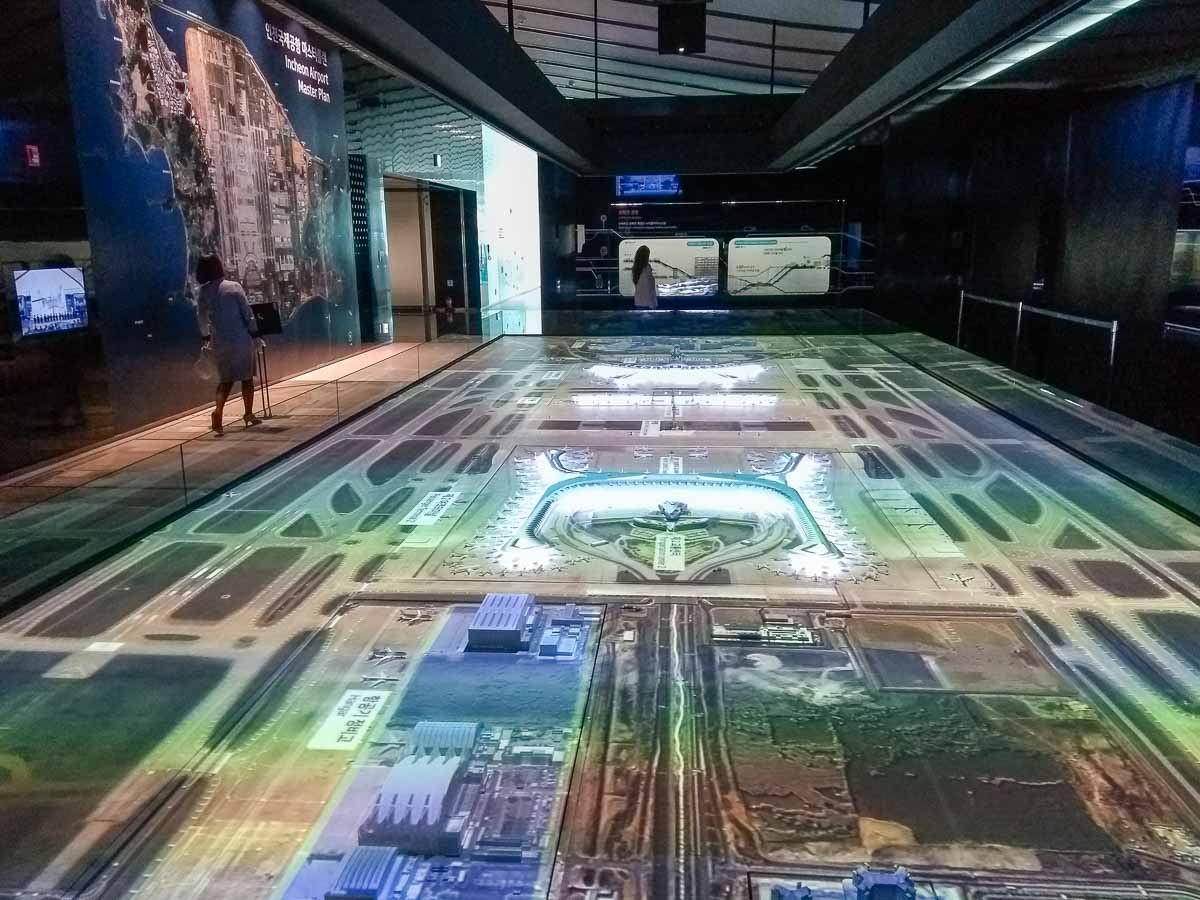 A rather large small-scale model on Incheon Airport – it’s a big airport. There was even a robot that looked like a modern dalek. Wyn accidentally hijacked it when the person with it moved away slightly – or maybe the robot thought she looked more interested? 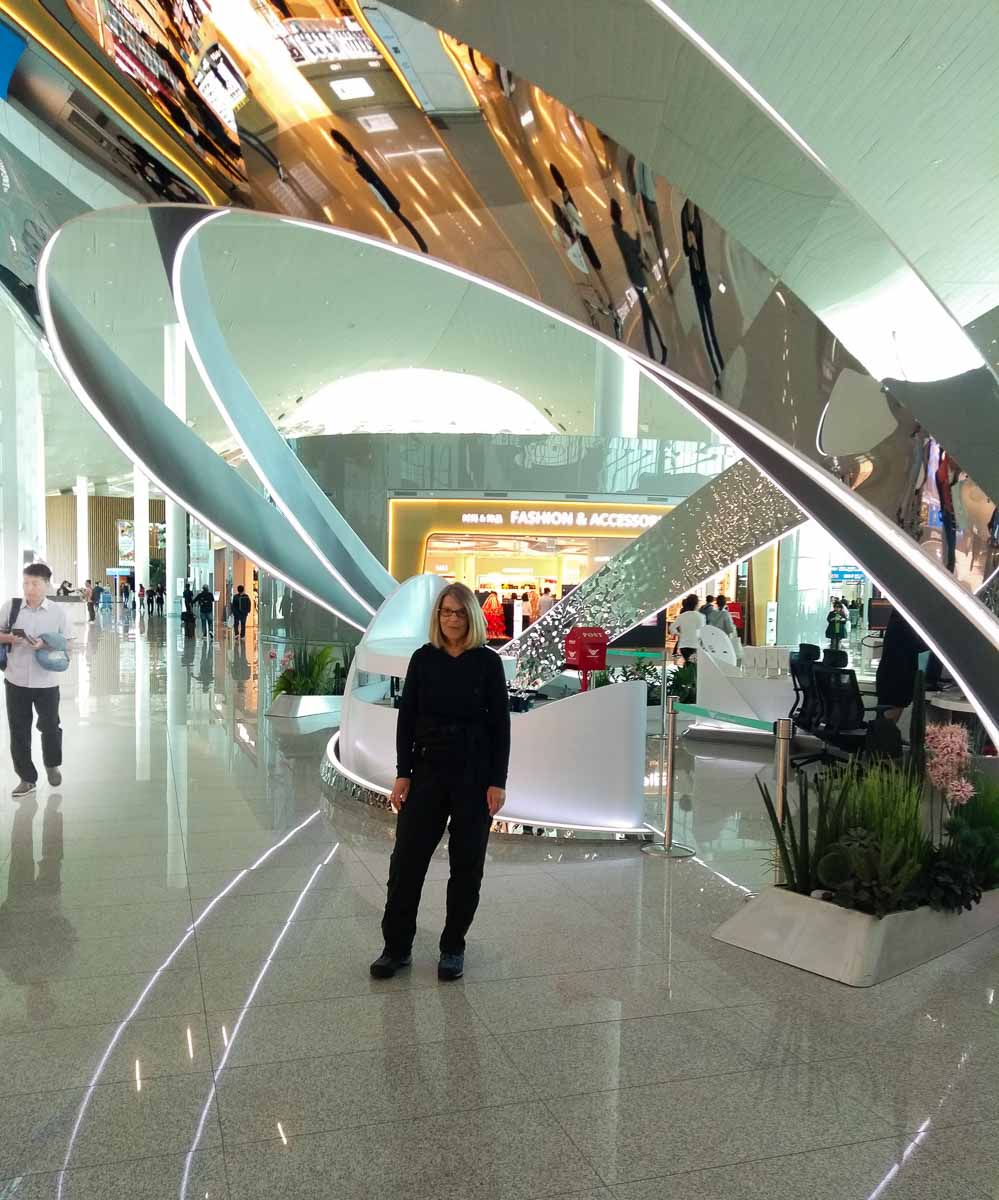 Eventually we made  the long walk to Gate 267 and our magic carpet ride to London. It was a double-decker Airbus 380.

Our Korean Airbus 380, being loaded up for it’s big journey.

By this stage I was feeling a lot less cheerful. I’d woken up coughing and spluttering and wheezing and sneezing. And singing “I Was Born Under a Wandering Star”! Wyn realised I was feverish and started me on some of her medications. By the time we got on the plane I realised I’d peaked for the day. After takeoff Wyn negotiated three seats for me to sort of lie down – if the foetal position is classed as lying. She managed to score a couple of seats a bit further back. After sleeping for about half the flight, I perked up enough to watch the ‘Peter Rabbit’ movie.

Eventually we arrived at Heathrow, which was a bit of an anti-climax considering this was the day we came across the world to see Noddy. The huge queue for Immigration was daunting when I was feeling like crap. but we got through it to find our shuttle bus to the huge queue in the waiting room for our Hertz rental car. But we got through that too once we worked out we were kind-of in the wrong place. There was a wonderful woman in the Hertz Gold office who sorted us out and we were soon on our way; out onto the M25 at the start of a Bank Holiday weekend, hurtling (and occasionally crawling) south west towards West Sussex. Soon enough we were driving past thatched roadside houses, and the plaintive “What’s the next instruction” calls were soon interspersed with “Wow! Look at that!” and “Crikey! We’re in England”.

[End of Chapter 1. Which was a long chapter but it is a long way from Dunedin to England.]

10 Responses to From the Beginning – Our Grand Tour Starts