A Sinner and a Saint

Oh dear! I really have gotten behind with all this blog stuff haven’t I. At least I’m going to have to be briefer now as we reconstruct our last few weeks.

We left you back at the orchard in early February as another week came to an end – hot and windy as normal. Now on with the story … 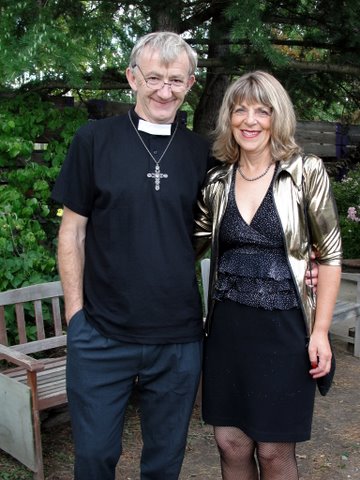 The Saint and the Sinner

Friday 5th February was the orchard Cherry Party – celebrating the end of the cherry season. This was held at the packhouse and the theme was Saints and Sinners. We spent a while thinking about what to wear. Wyn decided to be a sinner, what with her shiny gold jacket and fish-net stockings and short black skirt. She added some shiny black high-heel shoes and was set to go. I decided on a saintly appearance so made myself a bit of a dog-collar to go on my new black polo shirt and my old black trousers. I looked quite priestly and was set to go as well. Apparently I looked like Father Ted from the telly. It was a great night with lots of food and a good band and lots of fun. 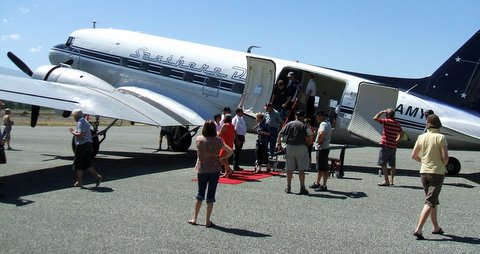 It was a good night to have the party since the next day was Waitangi Day holiday so everyone had two days off to recover. It was another scorcher. We were in Alexandra in the afternoon and heading for Clyde when we spotted a DC3 flying overhead. It had been buzzing around all day – not that an ‘Old girl’ buzzes. There is no mistaking that noise. It occurred to me that maybe they were flying out of the Alexandra Airport so we zoomed up there. We were just in time to watch it land and taxi up. It had been doing joy-rides and that was the last for the day. It was great to see the pleasure on the faces of the passengers disembarking. Some were older than the plane itself.

Taking the back road to Clyde we called in to the Monte Cristo cafe place that does real fruit ice creams and chocolate mud cake deserts. It was no competition – mud cake it was for us. Finally we headed over to Lake Dunstan by the Clyde Dam for another lovely cooling-off swim. It was a good way to end a good day.

Sunday was another day off and then it was into another week of work – Monday – Saturday again. Friends left on the Wednesday and we started to work out when we’d need to be going as well. We gave a couple of week’s notice that we’d be finishing up on the 24th. It was good to have a date to work to.