Wyn’s birthday is on Valentine’s Day which fell on a Sunday this year which was our day off anyway. The day started with valentine thoughts and then moved on to birthday presents. The morning soon went and it was time to head to Bannockburn and the Mt Difficulty vineyard for lunch. 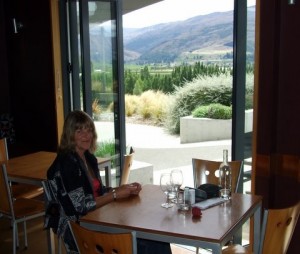 A very nice lunch it was too. It wasn’t quite warm enough to sit out on the terrace, but it a lovely view up the Clutha Valley. The afternoon was getting on by the time we headed to Wanaka for a lovely BBQ tea with Wyn’s son and his partner. The day was almost done by the time we headed home but there was still time to call in to say hello and goodbye to my sister at Pisa Moorings. Throughout the day Wyn had received a lot of birthday wishes by text and phone. And the day before she’d received a lovely bunch of flowers by special delivery to the packhouse. These had come from her grandson up north. When we got back to Suzi late on the Sunday there was another bunch of flowers on the doorstep left by the women who were our neighbours. They had found some roses and added some wild flowers and made a card. It was a special ending to a special day.

Monday morning was off to work as usual. This was our last full week so we were on the countdown. On the Thursday we took Suzi into an engineering place in Alexandra to get her tow bar checked out. There had been a bit of a protest when trying to pull her out backwards when I got her bogged the previous month so it was prudent to get it checked. This meant getting up early to drive both vehicles into Alexandra to leave the truck at the yard and come back to work in the car. She checked out OK which was good to know.

The mornings were getting darker and cooler. The days still warmed up nicely but it took longer to get the layers off. Summer was coming to an end.