Friday 20 August was a nice warm day that got colder as it went on. I worked on web site stuff and even got around to updating our own. Wyn had a walk around the local shops and that was about as exciting as our day got. Unless you count being unable to prise a cassette off the toilet base station. The things are supposed to be able to be pulled off when they are full. We’ve had a faulty cassette for a long time now and this time it dug its heels in. It had to come off and I was a bit perplexed for a while. In the end I moved the car opposite it and attached a ratchet strop to the cassette with the other end attached to the tow ball of the car. Desperate situations call for desperate measures. The ratchet effectively winched it off which solved the problem. 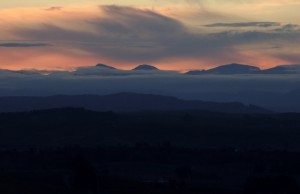 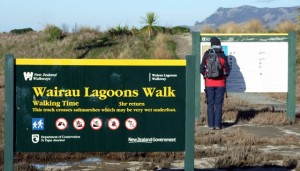 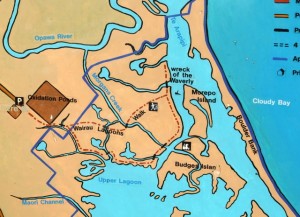 We agreed that we needed a weekend off, although it was going to be more a weekend to get our own stuff in order. Saturday morning was sort-the-paperwork-out morning. The afternoon Wyn cornered me and we ended up sorting out her tax return – or 99% of it. By the end of this we were in need of some fresh air so headed off over to the Wither Hills for a quick walk up to the lookout. The sun was setting as we were going up but it was a nice evening for a jaunt – if a bit chilly. 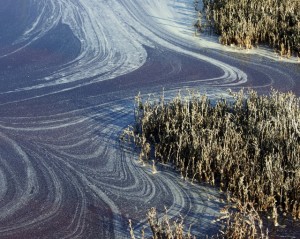 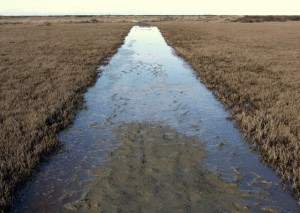 Never mind the saltmarsh being wet - it was the track that was the problem. 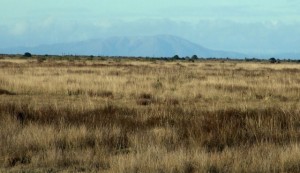 In the distance we could see the North Island 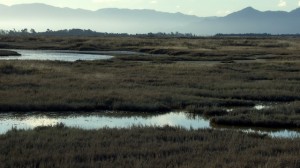 Today (Sunday) was a warmer morning again. We started with a walk today, a couple of blocks to a nearby market where we stocked up on some well-priced veges and fruit. Plus a chicken and vege pie for tea. We stopped off for a coffee at a cafe in the local garden shop – a busy place on a sunny morning.  We wandered back to our carpark at the bowling club and Suzi. Wyn cornered me again and hinted that it was time to tackle my tax as well. I needed some help so I tackled the IRD web site. This made me grumpy because it seemed hard to find what I wanted. Guidance is often written in the sort of language that raises more questions than it answers. I could ring them but I only have a cellphone and they don’t accept calls on their 0800 number from cellphones. I could go to their local office but I doubt there is one anywhere near Blenheim. I could ask but that would involve a phone call and they don’t allow me to ring them… Maybe it is just the whole tax thing that makes me grumpy. 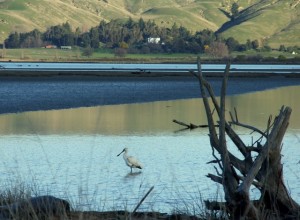 There were a few birds but not as many as we expected. I think this one is a Royal Spoonbill. 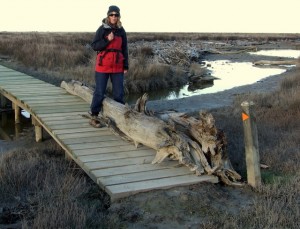 We wondered what the driftwood logs on the boardwalk meant... 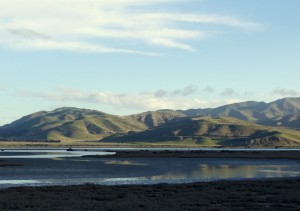 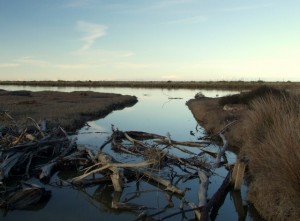 An arm of the estuary. 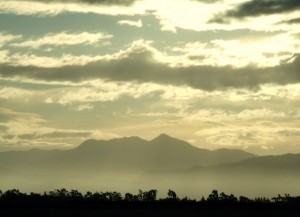 West towards the Richmond Range. 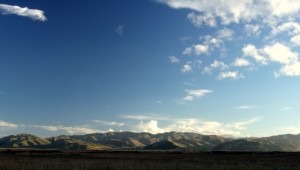 Towards the hills south of the Wairau Valley.

I got to a point where I worked out that they probably owe me money and my mood improved at about the same time. Eventually we abandoned the paperwork and headed off for a walk. The afternoon was getting on and it was cooling down too. We’d been wanting to explore the Wairau Estuary area and today was the day. A sign at the carpark warned that the track crosses saltmarsh which may be very wet underfoot. Rubbish! It wasn’t the saltmarsh that was wet, it was the track. Much of it was far wetter than the surrounding saltmarsh. And it wasn’t the wet underfoot that we minded; it was the water that was over our boots that got us wet. We were keen to walk through to the main part of the estuary. The most direct track soon got very wet, under and over foot. We retreated and tried the path less travelled. 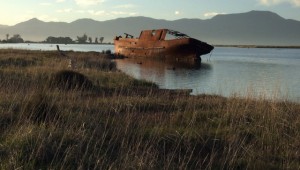 At last, the hulk of the SS Waverley

Wyn at the picnic table at the Waverley hulk. 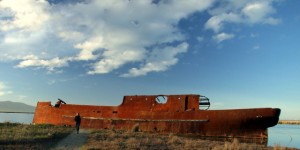 The rusting hulk of the SS Waverley is a bizarre sight beside the estuary.

I know we are supposed to stick to the tracks, but what about when the track is the only part under water? I’m sorry DoC, I was weak and wanted to keep my feet dry. We were running out of day and it didn’t seem like we’d get to where we wanted to. Plus I kept stopping for photos. It was a lovely afternoon. We agreed we’d have to turn back by 5pm but when 5pm came we thought we’d have to be close to one of the features of the estuary – the hulk of the SS Waverley. This wasn’t some awful maritime disaster on some dark and stormy night. Apparently the hulk was towed from Wellington to be sunk at the mouth of the Wairau River to form a breakwater. Before being scuttled it got away in a flood and was swept up the channel to where it now rests in the Wairau lagoons. 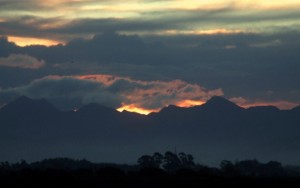 Sunset beyond the Richmond Range 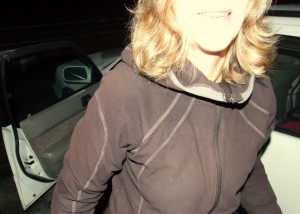 It was getting fairly dark by the time we got back to the car.

We carried on another 5 minutes and soon realised that the structure we could see ahead was the rusting hulk of the Waverley. It is a weird sight, resting beside the bank. After a few photos and a look around, we headed back the way we had come. The sun was getting lower and it had taken us an hour and a half to get there. We didn’t dally on the way back and it only took an hour getting to the car. It was almost dark by then so we were pleased to have made it. With a quick trip home we were in time for the sports news and then Top Gear where they made their own campervans. One was a three-story high rise on a big Citroen station wagon – heaven knows how they were allowed to drive it on a road – let alone up a motorway. It was all a bit contrived and very funny.