You Can Have Havelock

Back in April in the marvellous Marlborough Sounds, we woke to a new day at Elaine Bay. It was time for moving on – Laura had a plane to catch the next day. It was cloudy with the sun starting to come through later in the morning. After the previous couple of wonderful days, we were in no hurry to leave. It took us until early afternoon to get pack up, cleaned up and stowed away. Laura wasn’t so keen on swinging around the big corners in the front seat in Suzi so decided to travel with Wyn in the car. I was mindful of the “Caution Logging Trucks” signs we’d passed on the way in on Friday evening. This was now Monday and logging and mussel trucks would be back on the job. We got the walkie-talkies going so that Wyn could let me know what was coming. 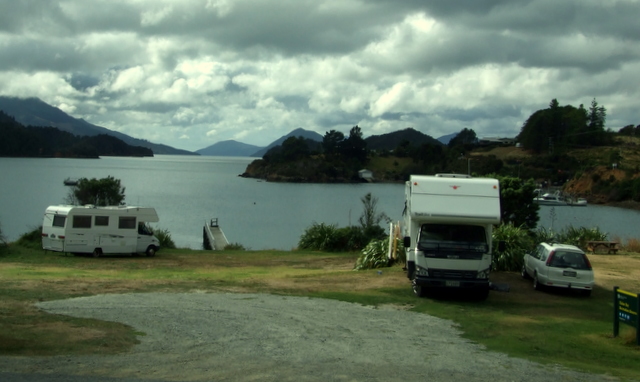 It turned out to not be a problem. The forestry lot were sitting around having lunch when we passed by and I only met one big truck and that was in a good place. The road didn’t seem as bad the second time over it. It’s funny how often that is the case.  We stopped at Rai Valley and Laura made tuna and rice salad for late lunch and I hitched the car up behind Suzi. We headed on to Havelock and stopped for a look around. We had a look in a couple of galleries and tried to buy coffees. There was a cute mobile kiosk so we asked there but they didn’t take EFTPOS but we could have found some cash but then she didn’t have trim milk.

So we tried the coffee shop along the road but he had no manners and was abrupt and rude. It seemed he wanted to close soon and didn’t want our business. We had money in our pockets; we wanted to spend it in his shop; and he didn’t care. Maybe he makes so much money every day that he doesn’t need any more towards the end of the day. Or maybe he is just rude and horrible. It makes you wonder why some people go into business. Remember Arkwright from “Open All Hours”? The shopkeeper with the till that snapped shut? He knew that people were walking past his shop and/or coming into it and they had money in their pockets. His mission was to separate them from as much of that cash as he could. Arkwright was funny, and was also right. The rude cafe man in Havelock could take some pointers from him. Maybe the Havelock Business Association needs to have evening classes where they watch old episodes of “Open All Hours” with discussion groups afterwards.

Having failed to stimulate the local economy in Havelock (and it did look like it needed a boost) we drove on to Blenheim. We parked up at the Racecourse and settled in and sorted out.

We were up at 6am the next morning to get Laura to the airport. It’s only about ten minutes drive and we still managed to be 5 minutes late for check-in. Being city folk we were a bit worried about being late but it wasn’t a problem. The plane was away on time and Laura was gone – off home south. We’d had a wonderful time with her and she’d been a good guest. It takes time to adjust to having visitors in Suzi, and then time to adjust when they go again. It’s no different to living in a house and having visitors, except Suzi is only 18.5 sq metres so it’s all a bit more and less. Life moves on and the experiences become our memories.