Photo of the Day #10 (Esquilant Bivy)

When is a hut not a hut? When it’s a bivy. Boom boom! Back in the old days many mountain huts were small. It was a long way up there for one thing. They probably had to carry everything up. Or drop them from small aircraft and pick up the pieces. Maybe that was the problem – they dropped big pieces for proper huts and ended up with small pieces. They made some huts so small they couldn’t call them huts with a straight face. So they called them bivies.

Esquilant Bivy was one of those. It could sleep six but only stand up one. Two bunks, three on the top and three on the bottom. And a small cooking bench at the front with room enough for one person to not be on a bunk. This meant that the five people had to lie around while the other one made the cups of tea and cooked all the food and did all the dishes. Awesome to not be the one!

Esquilant Bivy was 7,000 feet up Mt Earnslaw at the head of Lake Wakatipu. You young ones can google 7,000 feet and work out that that is quite a long way up. It was a staging post for climbing Mt Earnslaw but since it was actually most of the way up Mt Earnslaw just getting to the Bivy was a bit of an adventure. It is situated on Wrights Col. A col is a mountain term for a low point between two higher points. Most cols are wind tunnels and Wrights Col is no exception. That wooden thing in the photo is a shutter to go over the window to keep out small wind-blown rocks. I kid you not. 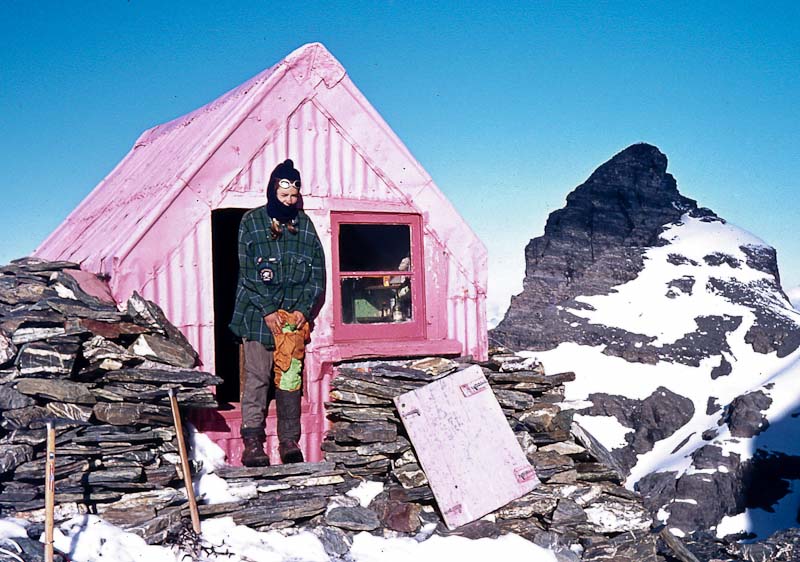 Sister Julia at the old Esquilant Bivy on Wrights Col on Mt Earnslaw – Pluto Peak behind.

The person in the photo is my sister Julia. Along with Mike Doig we were trying to climb Mt Earnslaw back in about 1972. We’d camped/slept under a rock way back down at the bushline – in Kea Basin. And zoomed up at dawn in three hours (perfect crampon conditions) on our first time to Esquilant Bivy. It was a great morning. Unfortunately it turned out that the rocks above there were badly iced up. We climbed through the first bluffs in crampons but crampons on rock is a hideous way to go anywhere so eventually we packed it in and went back to the warm valley. Julia was 15 years old at the time. She had already been to the Olivine Ice Plateau that summer.  I must have been 17. It was an interesting time to be young.

This photo is from a scanned transparency. It would have been taken with my trusty old Paxette Braun Electromatic 35mm camera. It was scanned for me by my daughter Laura. Looking at the photo the other day, I realised that there is an uncanny similarity between Julia in the photo and Laura today. Not that there is a lot to go by.

We came back about a month later with three others (including sister Wendy) and stayed in Esquilant Bivy and climbed to the top of Mount Earnslaw the next morning. I don’t remember who ended up doing all the cooking.

5 Responses to Photo of the Day #10 (Esquilant Bivy)