Travels in South East Asia August-September 2011 – Day 8. Leaving Koh Samui was another adventure. We could easily have stayed longer, but we had places to go. We had booked travel to Bangkok, but that was an adventure in itself. It was always hard to be sure what we were booking. We were particularly keen on air conditioned travel for the overnight train to Bangkok. But it was impossible to be sure what was in store for us. We hadn’t anticipated how much of a mystery trip the journey to the mainland station was going to be.

First there was a van trip from Lemai Beach to the main exit port on Koh Samui. Then there was a lengthy wait for a small fast ferry boat to the mainland. From 35 years before I expected it would only be 14kms from the mainland port to the station. So the ramshackle bus at the port to ferry us didn’t look like too much of a hardship. It was hot and muggy but with the windows down we were OK, until the downpour. Half an hour went by and still the old banger charged on. More and more concerned glances were exchanged as in the end nobody had any idea where we had landed or how far we were to the station or where we actually were. An hour went by and at least we started to see some signs for Surat Thani so it was still ahead somewhere.

Until we turned off on a road to somewhere else. After a while we stopped at a tyre shop and the driver took a tyre out of a locker to leave it for repair. We were on a 4-lane freeway so we wondered what next? What was next was a 4-lane freeway U-turn to get back on the right road! We finally arrived at the station after an uncomfortable journey of about one and a half hours. It turned out that there were at least three different “ports” for Surat Thani. Couple that with 2 different landing ports on Koh Samui and the possibilities were considerable, as was our confusion.

It was 5.30pm but that didn’t seem to make any difference to the temperature. There was more confusion on the platform as there seemed to be multiple trains overnight to Bangkok. A kind person checked our tickets and told us where to wait and eventually our train pulled in. Our carriage had fans, which was disappointing as we’d paid extra for air conditioning. But we were over worrying by then. It was a sleeper car on a train to Bangkok. In the end we were exhausted, and I had to admit that it seemed cool enough. Who knows what the real difference was between Aircon and Fan. We were well past caring. We were moving on. We slept. 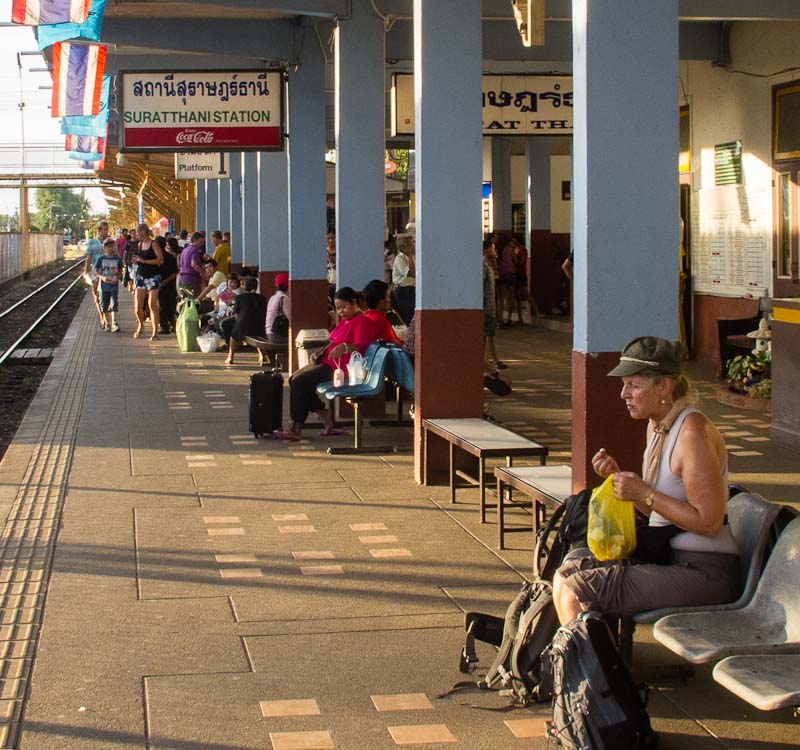 Wyn playing it cool on the platform at Surat Thani station, Thailand

This entry was posted in Photo of the Day and tagged South East Asia, Surat Thani, Thailand. Bookmark the permalink.