Pulling in to Bangkok by train was an interesting way to arrive in the bigcity. But it did give the impression that it is quite big. Bangkok is strange for those of us from smaller cities – it doesn’t have a middle to it. It’s all over the place, with accommodation and shops all over the place. How were we supposed to work out where to stay? There was so much choice. Khao San Road looked like the place to be if we were 25 years old. Nearby Soi Rambuttri sounded like it was more suitable for those who liked less hectic places, so we headed there. And even managed to get a taxi that ran on a meter. Round 1 to us.

The second hotel we tried said they might have a room after checkout time. We watched others being told the same thing and leaving. We decided to camp in their nice eating area until a room became available, and soon enough they found one for us. All this by about 10am! Round 2 to us.

Wanting to make use of the day, we headed off towards the Grand Palace. A very nice man we met along the way let us know that the Grand Palace was closed that day. He suggested we hire a tuktuk and check out some of the lesser temples and have a trip on the river. He kindly flagged down a tuktuk (scooter-taxi, smog and noise generator) and told him to look after us. We had just fallen for the most common scam in the book. (We later read the warnings in Lonely Planet – so it literally is in the book!) Round 3 to them.

We had a funny old day – getting around some obscure temples. The tuktuk driver took us to a tailors shop, but they can’t have liked the look of us any more than we of them so we left unscathed. Later the tuktuk driver asked if he could take us to a gem factory. We just had to look and he’d get compensation for his fuel. The gem factory was scary as each part flowed through to another and somehow we knew we had to keep going to get out. Luckily a more likely group turned up not long after us so the sales pitches to us were only half-hearted. We finally emerged somewhere else, none the lighter of wallet. Round 4 to us.

Our tuktuk driver had said we were under no obligation to buy. But when we emerged and were reunited with him, he knew the bad news and wasn’t pleased. We got the story about having to support his family and fuel costs etc etc. We were getting tired of the whole scam thing and suggested we cut to the river boat place where we were supposed to get non-tourist price trips. Yeah right! When he dropped us off we said we’d find our own way from there and he was happy to see the back of us. The feeling was mutual and after he’d left, we did too. We were only a couple of kilometres from Soi Rambuttri and our hotel and we decided the safest and most reliable thing was to walk.

We did just that, despite many offers from other tuktuk drivers. Later we ventured out from the relative calm of our hotel to wander our relatively calm street – see the photo below. (If that looks somewhat chaotic, imagine something about 10 times as busy/hectic/manic and you’d start to get the idea of nearby iconic Khao San Road.) We’d had a big introduction to Bangkok and emerged wiser and not much poorer. Round 5 and the day to us. 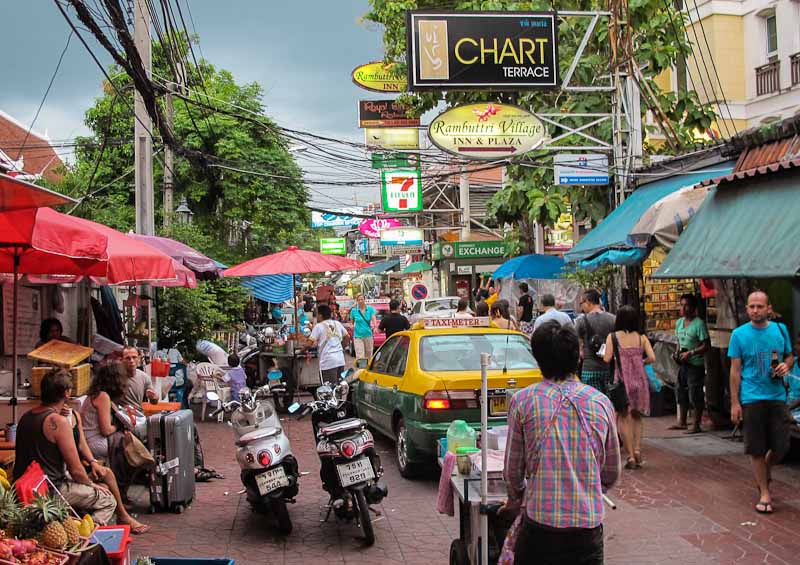 This entry was posted in Photo of the Day and tagged Bangkok, South East Asia, Thailand. Bookmark the permalink.