The Big Auckland – Part One

She’s a big place Auckland. The Herald newspaper last weekend made reference to it already having one third of New Zealand’s population (link). The current population is almost 1.5 million, and projected to reach 2 million inside 15 years from now. It’s growing at more than twice the rate of the rest of the country. She’s a big place and getting bigger.  Coming from way down south I’ve always been a bit fearful of approaching Auckland. But with increased exposure over the last 5 years I’ve managed to get over that. By last year I felt comfortable zooming up the Southern Motorway.

We’ve come to appreciate the better bits about Auckland, and to live with the bad bits. (The worst bits are things like the traffic and house affordability.) There’s a lot to see and do in Auckland. And lots of lovely beaches all over the place. And wonderful Regional Parks for hanging out at and even camping/parking in. And cheap airfares to and from lots of places. Earlier this month provided a good opportunity for two of my children Andrew and Laura to come up from way down south for a week to hang out with us and see a bit of the city.

We were able to park up at Ambury Farm Park, one of the Auckland Regional Parks. This is near Mangere Bridge and adjacent to Manukau Harbour and close to the airport – a great location.  We thought we’d acclimatise them to Auckland gradually, so didn’t go far first day. Just across the Mangere Bridge to Onehunga and up to the top of nearby One Tree Hill. One Tree Hill is one of Auckland’s many volcanoes and provides a great 360 degree view of Auckland City. You can drive to the top, so we did. It was a chance for us to point out some of the landmarks and give them a bit of an overview – literally.

Wyn, Laura and Andrew on top of One Tree Hill, Auckland CBD beyond 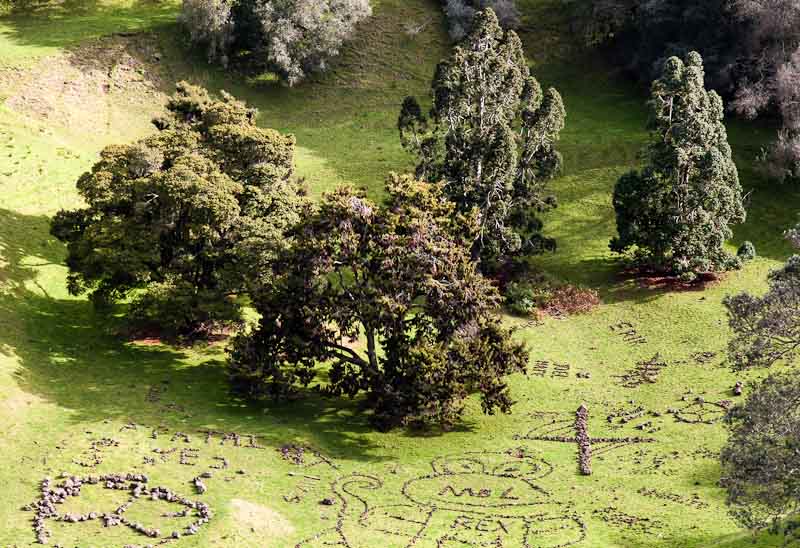 A group of trees in one crater of One Tree Hill. People have had fun with the rocks that scattered the crater. Something about this photo makes me think of model railways. 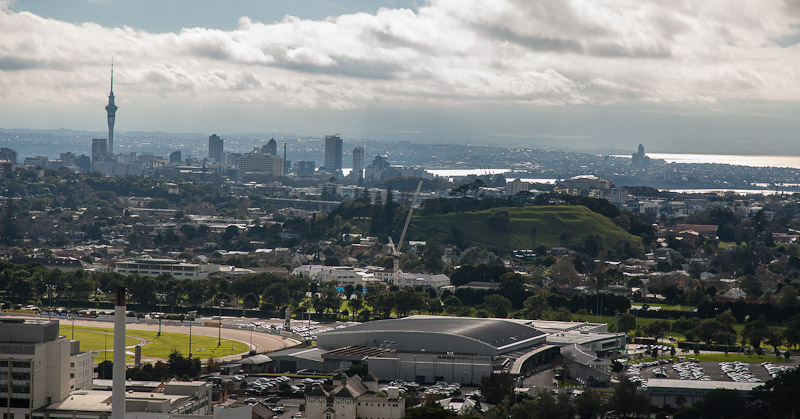 Auckland from One Tree Hill. ASB Showgrounds and Logan Campbell Centre in the middle foreground, Alexandra Park Raceway to the left of that. Mount Saint John is the green (volcanic) mound in the middle. The Sky Tower and Auckland CBD is beyond the raceway, with the Waitemata Harbour visible beyond the CBD. The high-rise in the distance on the right is at Takapuna on the North Shore, with the Hauraki Gulf visible beyond that.

We came back down the middle of Onehunga with a lengthy stopover at Dress-smart for clothes shopping. It is a big concentration of clothing outlet shops; all side-by-side and discounting like crazy. Good fun for anyone. From there it was only a brief jostle with the traffic back to Mangere Bridge and our peaceful park.