There were things we could have done around Shangrila, and things we might have done. But we didn’t. We ended up a bit lethargic. Maybe the altitude didn’t help. Maybe we were just a bit lethargic. There are not a lot of sightseeing options in the city itself, and one stood out; Baiji Temple aka 100 Chicken Temple. It was close by so we set out to walk from our guest house.

As is often the case, directions and signage are vague or non-existent in China. We were getting used to that and finding our map-on-the-tablet a great help, especially coupled with GPS so we could see where we were on the map. Early on this outing we passed a group of younger travelers who we figured were looking for the same place. Only they were walking in the opposite direction to us! When we were so unsure ourselves we didn’t like to show our confusion in the face of their youthful confidence. Which was silly as it turned out because they were more confused than us! 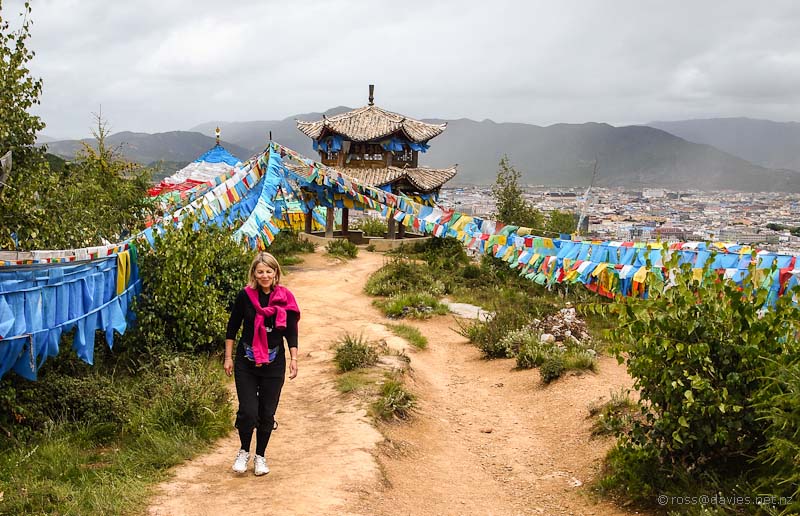 The trail soon left the residential area and climbed up the hill, rewarding us with expansive views of the district. We could see a cablecar/gondola system ascending the hill up the valley to the north-west, and then another lift system in the upper valley to the right of that one. In hindsight maybe it provided access to the skifield which was somewhere around Shangrila. 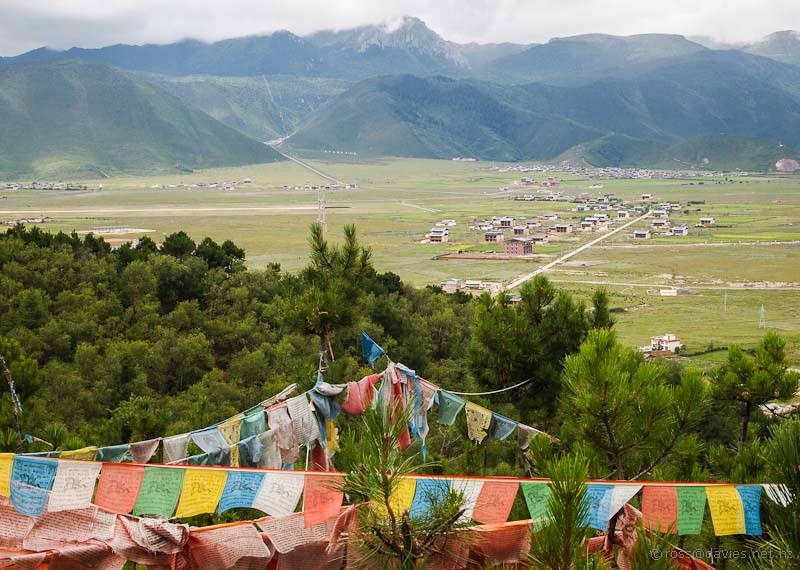 Looking west from Baiji Temple Shangrila. Spot the gondola/cablecar system up the valley to the left and then another above and to the right of that one.

100 Chicken Temple is a great name. We didn’t see 100 chickens but there definitely a whole lot of them wandering around like they owned the place (which maybe they did). 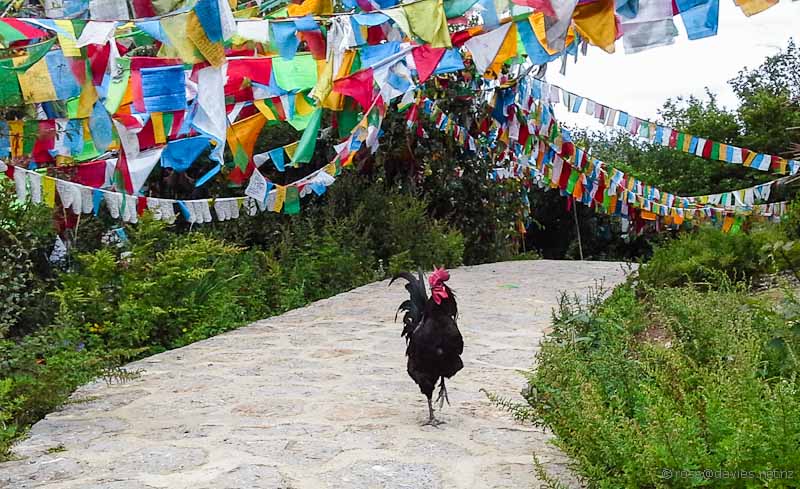 Panorama of Shangrila. [Click on the photo for a wider /larger panoramic view .]

It was a wonderful viewpoint. We worked out we could see our guesthouse from there and thus that we’d been able to see the temple from our guesthouse. Just beyond the earthworks in the foreground of the picture below is a green area of trees with a cemetery. Below the cemetery is an area of small trees growing through some aqua-coloured plastic. Immediately in front of that is a small tall building with a couple of solar water-heating panels on the roof. This is Kevin’s Trekker Inn and our room was on the second-to-top floor on the taller part. Great location and view.

As well, up the valley slightly removed  from the city is the Songzanlin Monastery that we had already visited. There is nothing like a bit of gleaming gold to highlight a monastery. 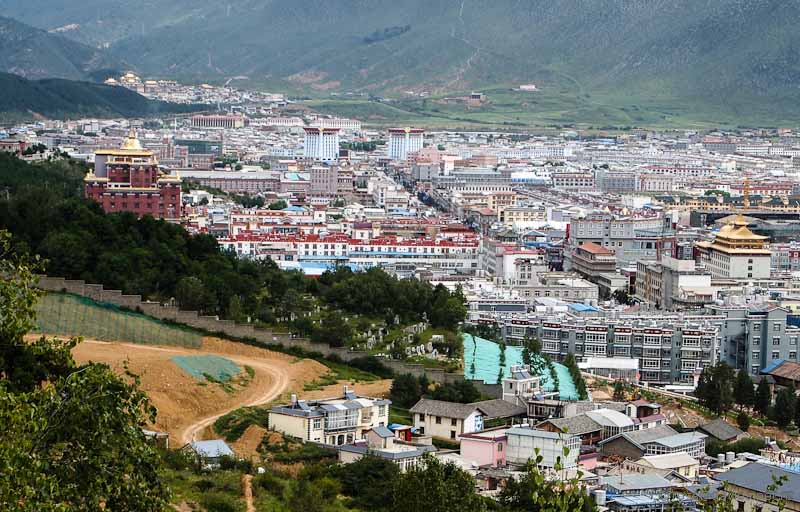 Prayer drum and Golden Temple Shangrila. The open area in the left foreground is part of the old town destroyed in the fire at the beginning of 2014.

From the top of the hill we made our way down more directly towards the old town area. On the way we came across what looked initially like ant/termite hills but which must have been all that was left of some old buildings. With nothing to explain it, we could only wonder at what had been. 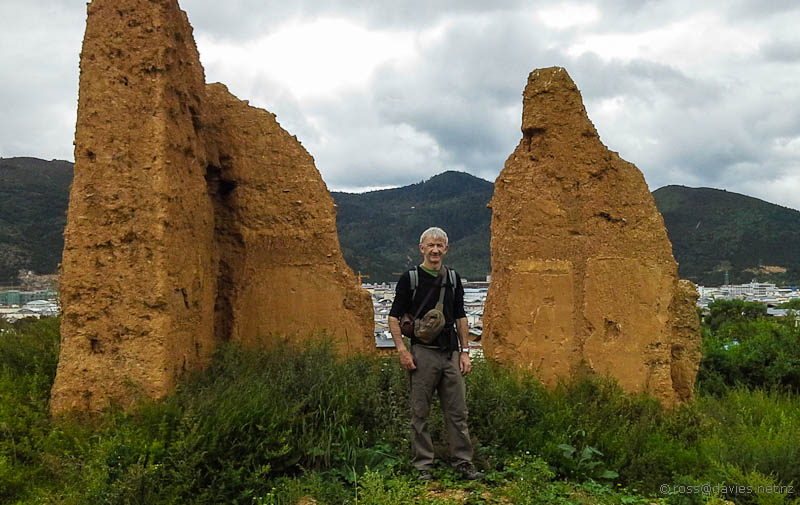 There is a lot of building going on. Some will be rebuilding after the fire and some will just be expansion and redevelopment. 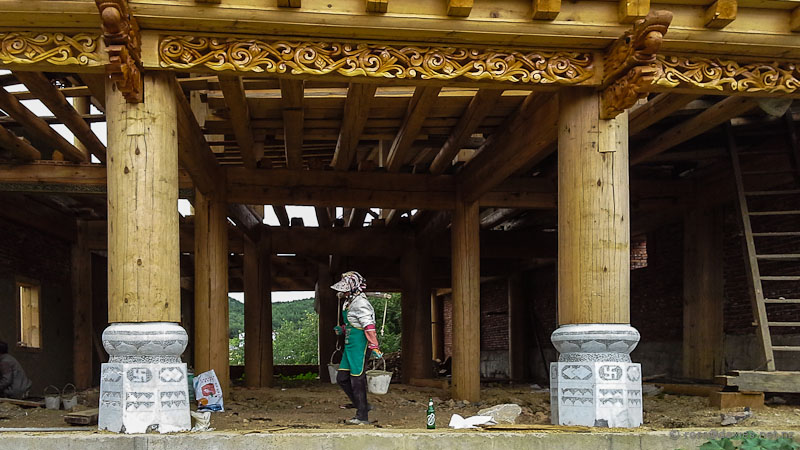 Rebuilding in old town Shangrila. Spot the reverse swastikas which are not reverse swasikas but ancient Tibetan symbols. 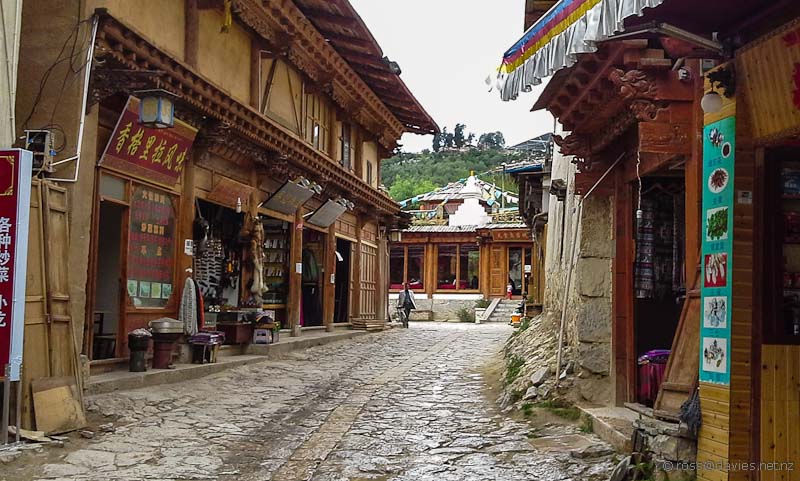 The old town was a sadly empty place. A lot of the old town has survived, and presumably some is already rebuilt – it is often hard to tell. But the alleyways definitely look real and old and well-worn. Now they just need more people to go and stay and help re-start their tourist economy. 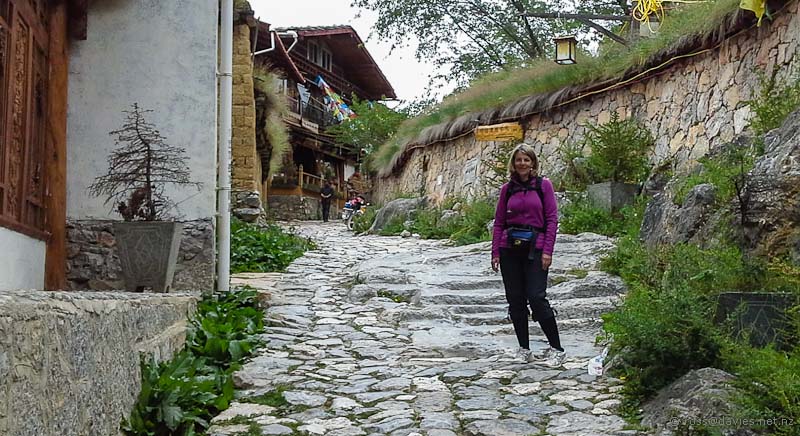 Having met two very nasty Tibetan Mastiff dogs in Nepal many years ago, the expression ‘nice Tibetan mastiff’ is definitely an oxymoron for me. Imagine swimming with ‘nice piranhas’. Would you let your toddler play with a ‘nice Rottweiler’? I thought it was a great name for an inn but nothing could persuade me to stay there if the dog was remotely alive. (For a less prejudiced view of Tibetan Mastiffs, see here.) (For the video, see here.) 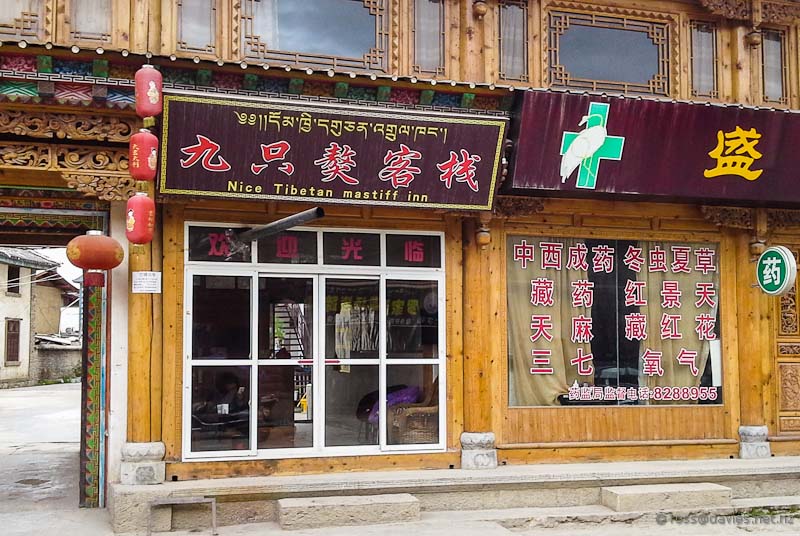 Nice Tibetan Mastiff Inn Shangrila. Spot the exhaust pipe out through the window.

Later that day we made our way to the airport (in plenty of time) to catch our second and last internal flight in China. The airport was big and mostly empty so there were no queues. There are relatively few flights in and out from there, which is one of those good news/bad news tales. With few planes the place is not overrun with tour groups. But it does make it a bit tricky trying to get a flight on to the north east – which is where we were headed. We had made our way north through Yunnan province for almost two weeks from Kunming to Shangrila. Yunnan was what had brought us to China and it didn’t disappoint. In hindsight it was the highlight. 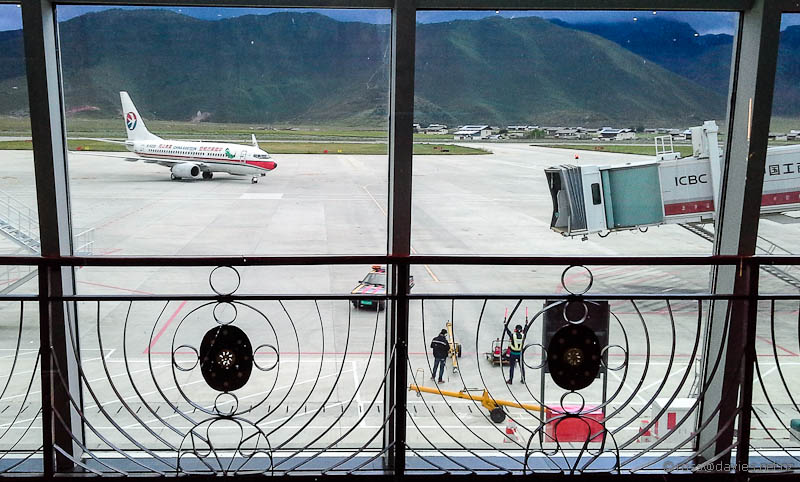 By the way, I don’t know which came first, the chickens or the temple.