Several Views From One Tree Hill

As well as being the city of sea and beaches, Auckland is also the city of volcanoes. There’s about 50 of them – dormant. They don’t work any more as volcanoes. But they do work well as viewpoints. They rise above the city and provide lots of places to look around. To admire the city from. Last week we ended up at the foot of one – One Tree Hill. It turns out it is not a good strategy naming a hill after a potentially temporary thing like a tree. Because if it burns down or dies or gets chopped down it looks a bit silly. The hill with no tree called One Tree Hill. It must take a bit of explaining?

We’d gone through Onehunga looking for a cafe at about 5pm. It turns out there are no cafes open at 5pm. Apparently all the likely customers are caught up in the traffic. Or trying to go somewhere else. Or have already had their daily quota of coffee. Whatever, it seems there is no supply which suggests there is no demand. Except us. Which isn’t enough.

The last closed cafe was at the foot of One Tree Hill. We gave up and decided to take in the view. You can drive to the top which is quite surprising because it is not a very big top.

Auckland from One Tree Hill. In the front is Greenlane Hospital with the Logan Campbell Centre to the right of that and the Alexandra Park (trotting) raceway to the left. The hill to the left is Mt Eden and the water to the left of that is the upper reaches of the Waitemata Harbour. In the centre is the Sky Tower and downtown Auckland. To the right is the North Shore and beyond that the Whangaparoa Peninsula. [click on the photo for a larger view] 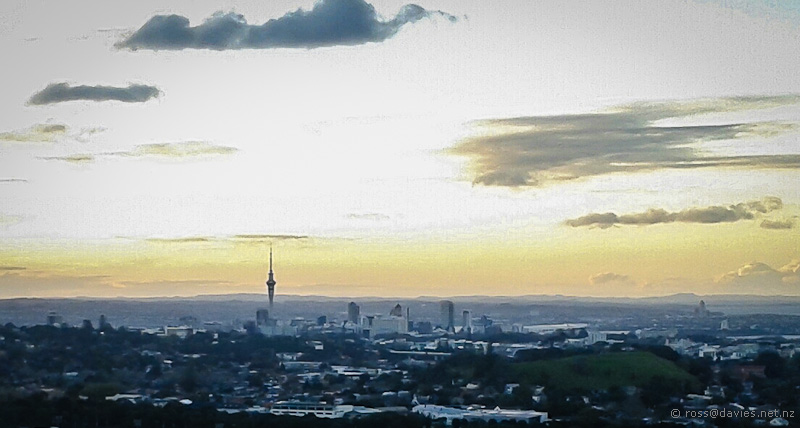 Auckland from One Tree Hill. Sky Tower and downtown city in the centre. The high-rise blocks at Takapuna are on the right in the distance. 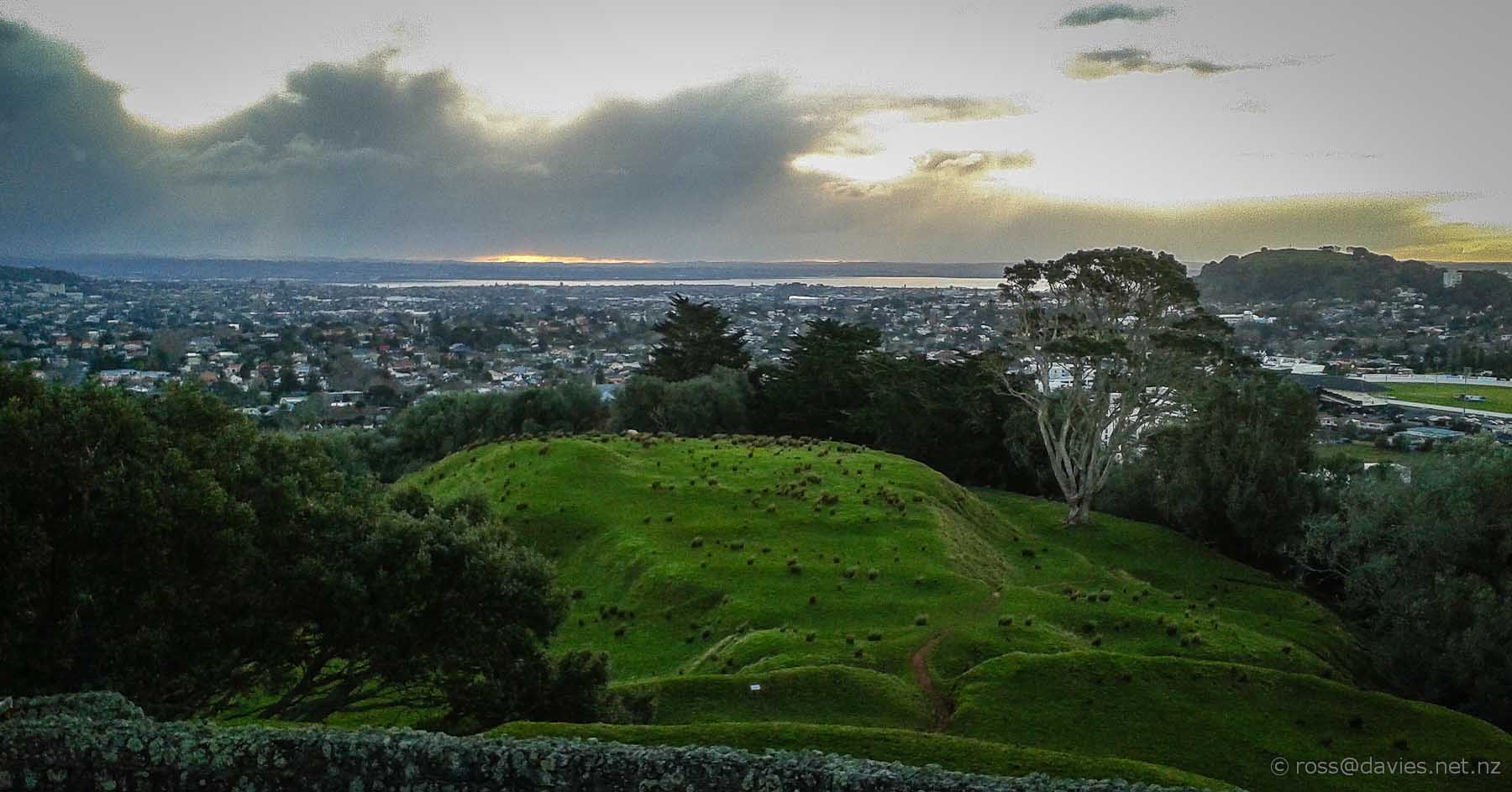 Auckland from One Tree Hill – looking north west. Mt Eden on the right and the upper reaches of the Waitemata in the centre distance. [click on the photo for a larger view] 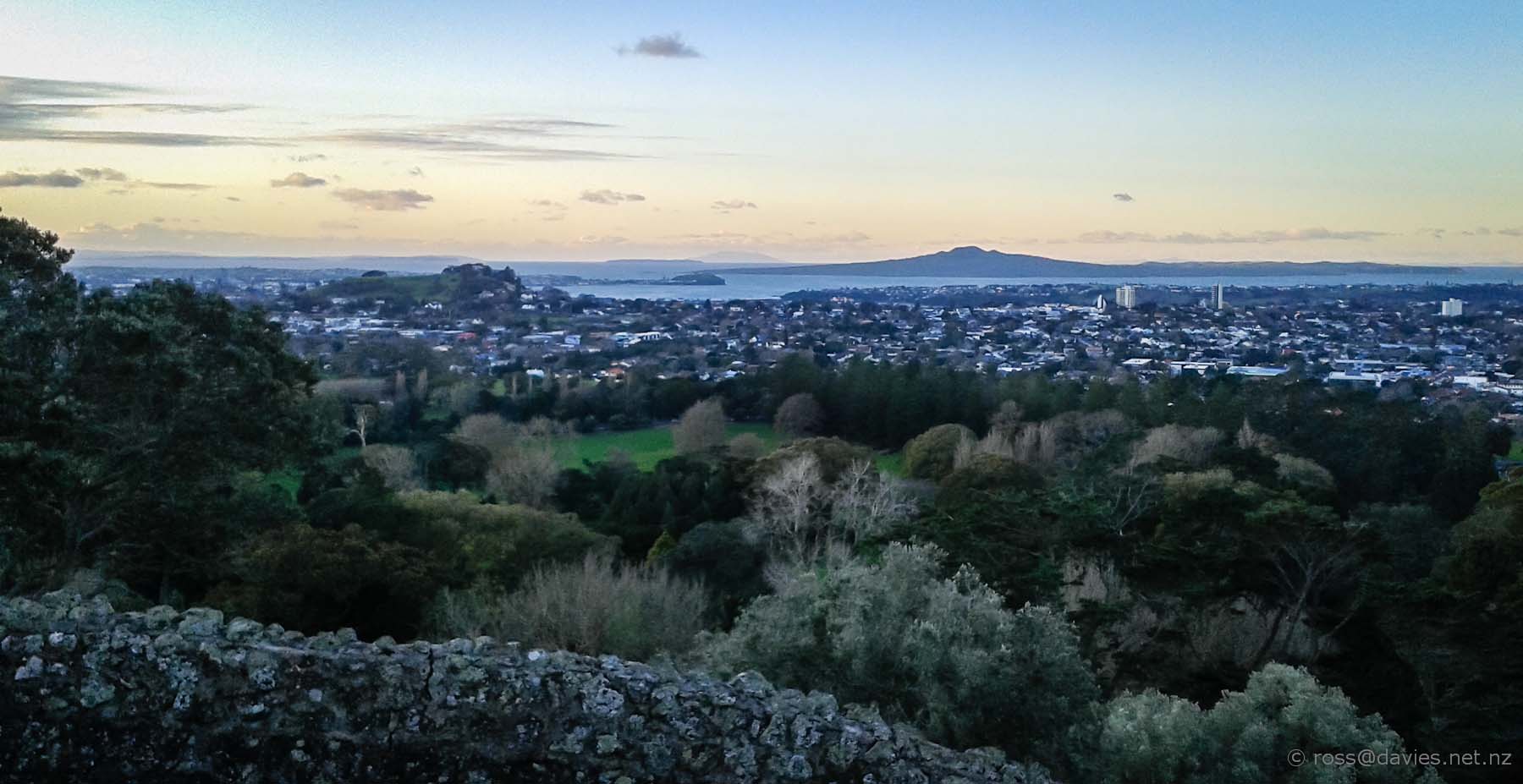 Auckland from One Tree Hill – Rangitoto Island right of centre and Mt Hobson left of centre. To the right of Mt Hobson and across the head of the Waitemata Harbour is North Head. Beyond that and the left end of Rangitoto Island is the long low profile of Tiritiri Matangi Island and in the haze beyond that across the Hauraki Gulf is Little Barrier Island. [click on the photo for a larger view]

Auckland from One Tree Hill; Ellerslie in the foreground with Mt Wellington rising beyond. In the distance out into the Hauraki Gulf is Waiheke Island. On the left and in the haze is the top end of the Coromandel Peninsula. [click on the photo for a larger view]

It was a cold sort of evening so we returned to the motels and went to the pub next door for our coffee. Except their machine was broken. Everyone not from Auckland makes jokes about  Auckland’s coffee culture. But sometimes it can be very hard to actually get one. I wasn’t sure about the pub with no coffee. But then they offered chips with gravy and I forgave them.

This entry was posted in Daily log and tagged Auckland, coffee, One Tree Hill, volcano. Bookmark the permalink.