Yesterday was a nice surprise; a fine sunny day. We wanted to make the most of it and set our sights on the Mangawhai Cliff Top Walkway, Trouble was; the round trip needs low tide and that was rather inconvenient. The first low tide was before 7am and that had been and gone. The second and last was after 7pm. So it was going to have to be a late walk but not too late; the sun is gone by 6pm. 3 hours either side of low tide is apparently OK so we worked out it’d work out, and we’d have a falling tide at worst.

The walk is claimed as one of the best in the country, and we were keen to try it out. And test ourselves. It was only our third day of exercise after quite a spell of inactivity. The walk is listed as 5kms, and 2-3 hours which is a bit confusing as it starts with a 15-20 minute walk along the beach from the car park. We measured it by GPS as 8km for the whole walk so the pamphlet is misleading.

We finally started at 3.15pm and headed along the beach we’d walked the day before. It still wasn’t even 3/4 tide so the plan was to walk the cliff top part first and return via the shoreline. The beach was a hive of activity with lots of dogs and walkers as well as kids sliding down the sandhill plus parapenters sailing on the updraughts. 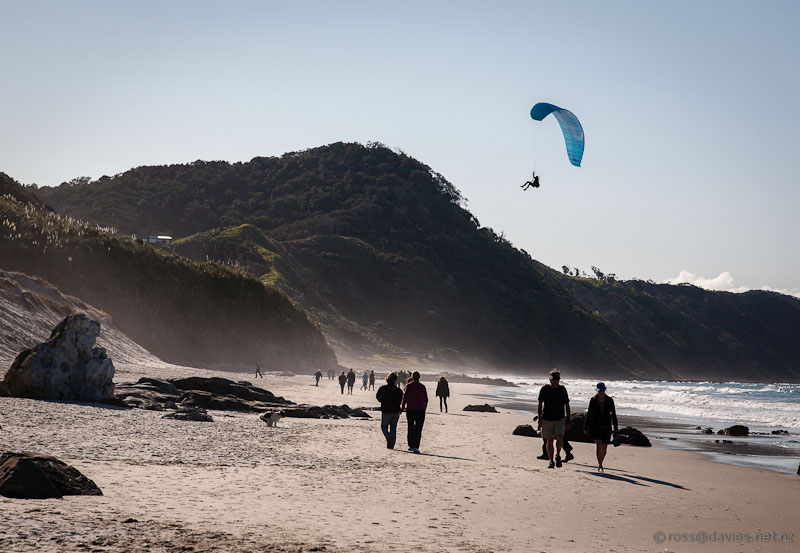 Too soon it was time to leave the beach and start the climb up the hill. It is a strange sort of beach; wild and windswept but with houses. There is a lot of subdivision going on with large blocks of land with large houses on. Most of the houses are perched on ridges but some are down by the beach. The track climbs above and beside some of them, an unusual juxtaposition. 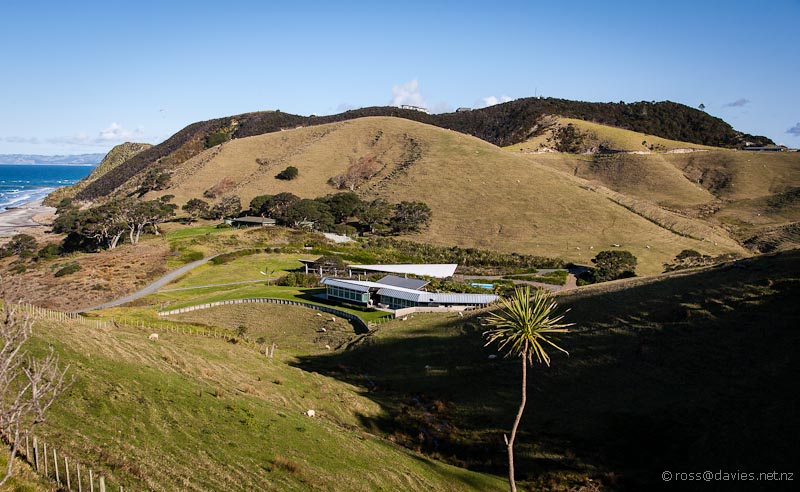 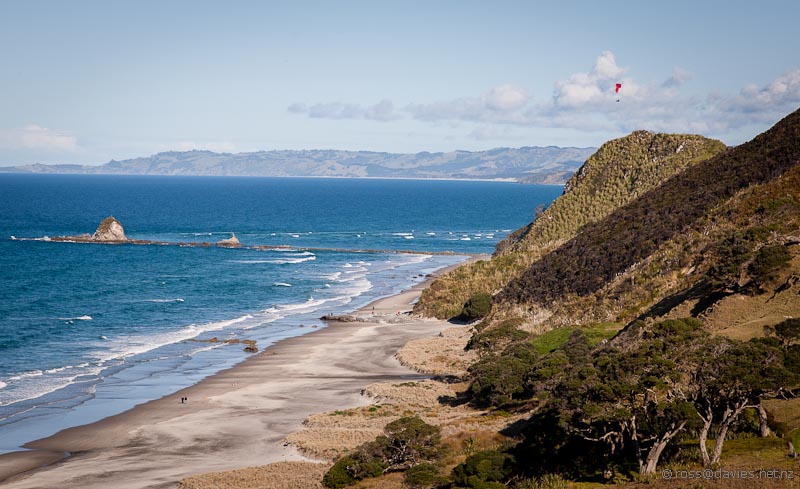 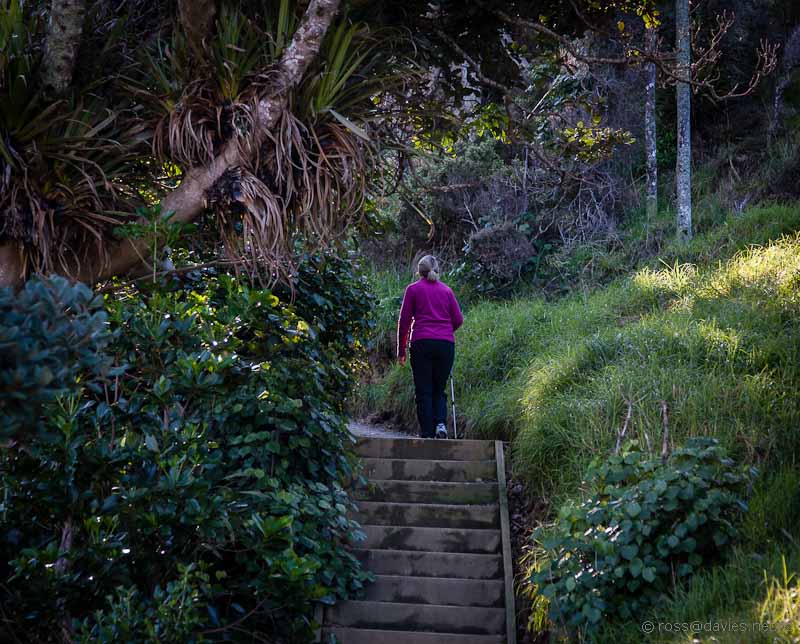 The track gives a great birds-eye view back along the beach. Eventually the climbing is mostly done and the track then hugs the cliff top heading north. There is a parallel road that suggests more residences. All the development is on private land and will have been approved by the council. But you have to wonder what they were thinking when so much of the development is on ridge tops and so much more visible and intrusive. 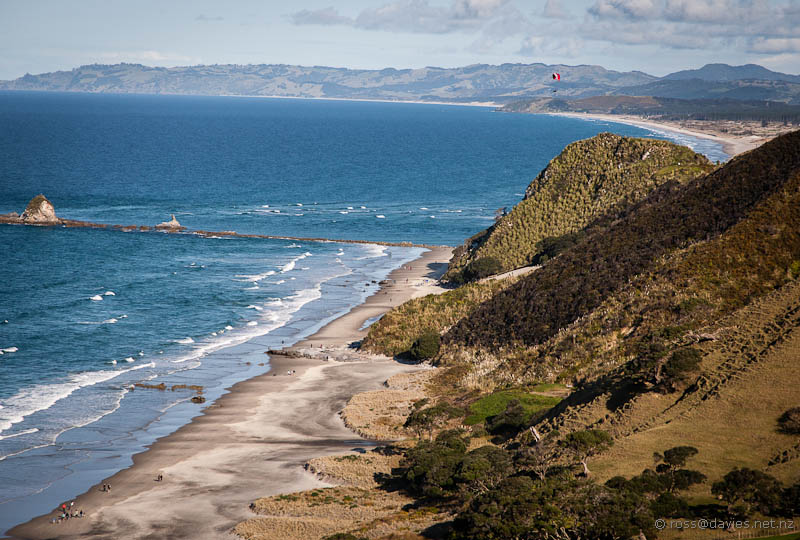 The sun was getting a bit lower by the time we reached the northern extremity of the track and there was a vantage point here that gave views inland as well as seaward to the numerous islands. 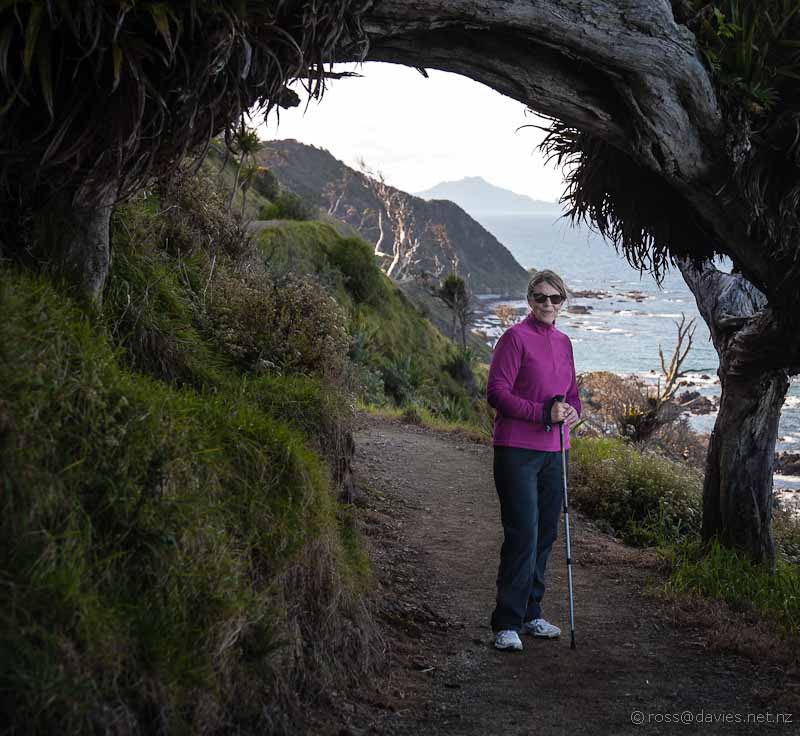 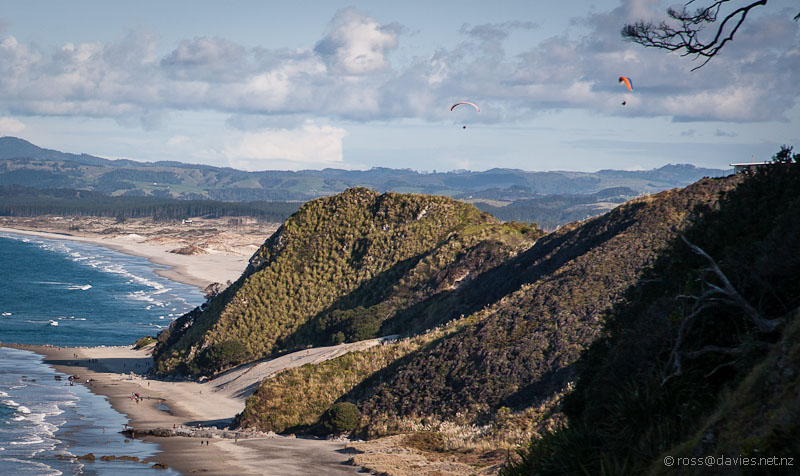 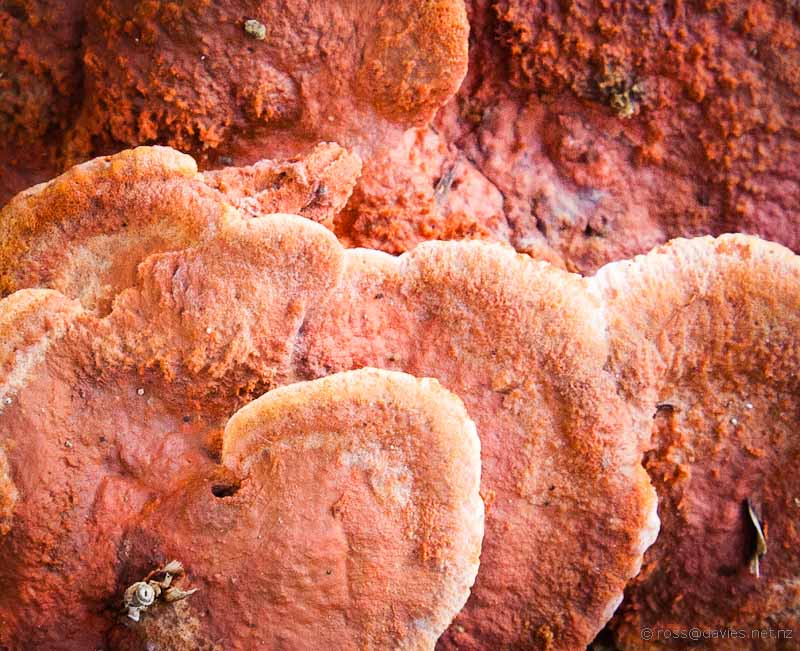 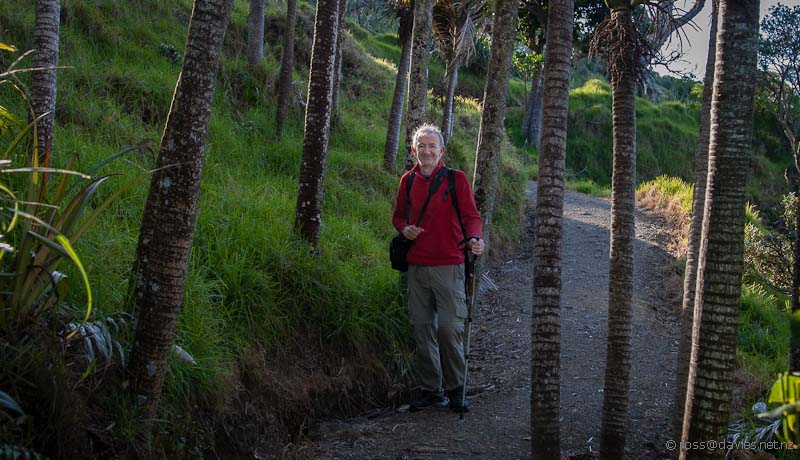 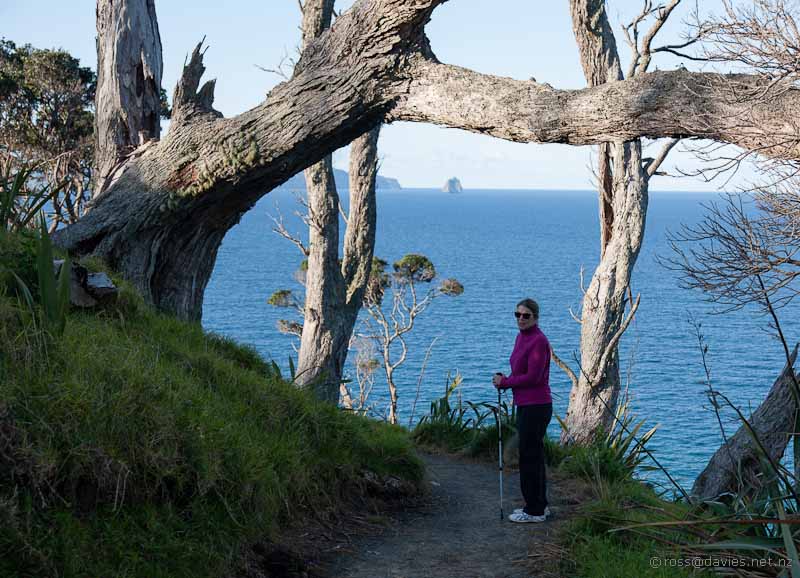 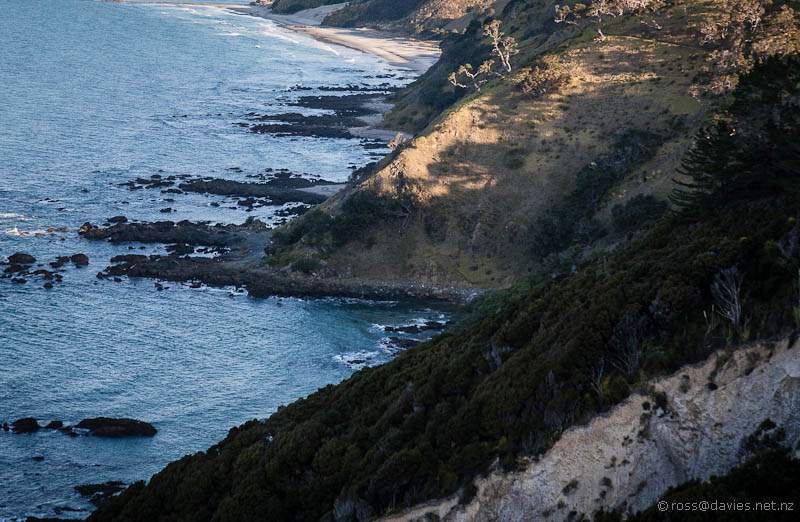 Coastline below the Mangawhai Cliff Top Walkway. The route back is around that shore – much of it on natural shelves.

Then it was down, down, down the many steep steps to the shoreline. The track passes through an impressive grove of nikau palms on the way down. It is a very good track with hardly any signs of recent rains. It’s well routed and well maintained; thanks to the Mangawhai Tracks Trust. 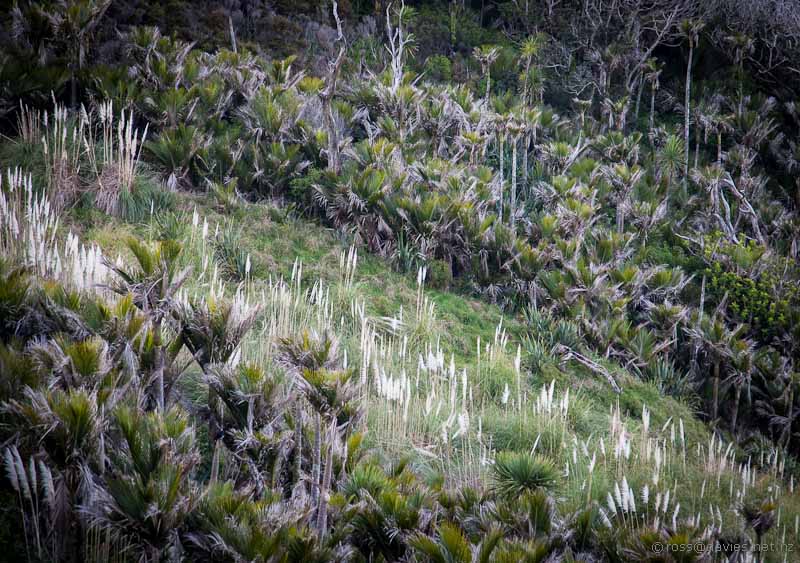 Down at the coast line we headed south through the archway rock. This is where the track pamphlet tell you to turn back if the sea is surging through the gap. We were fine though; there was no sign of the surging and the tide was still going out. 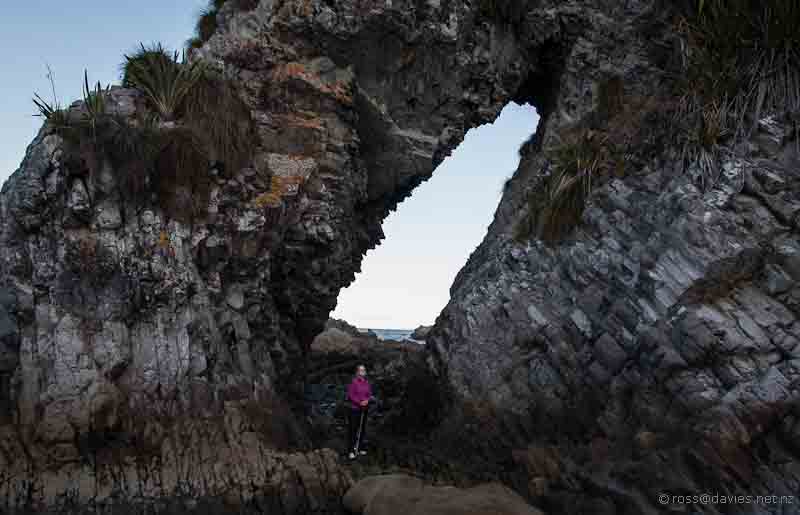 Natural rock arch on the Mangawhai Cliff Top Walkway – the route goes through.

There is a lot of rock-hopping on the way back along the shore and that was a good test for our tired muscles; or somewhere between test and final straw. There were stretches of sandy beach and lots of loose pebble parts as well. 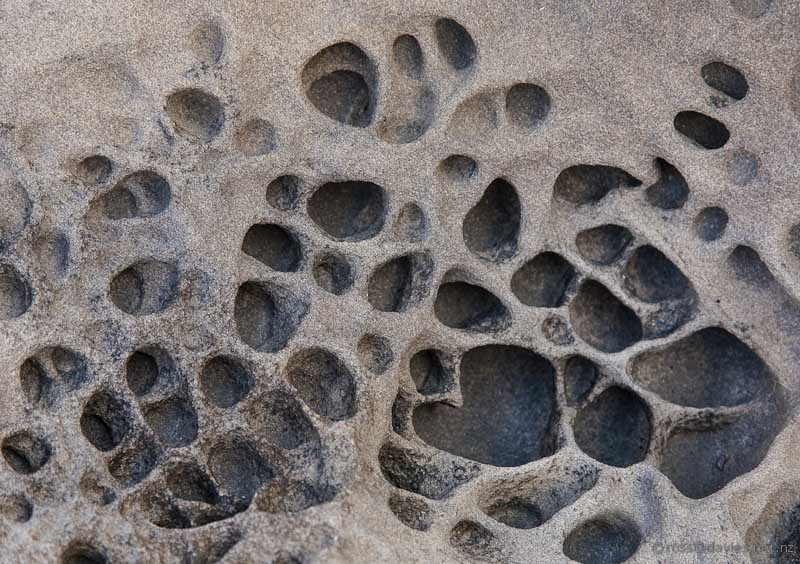 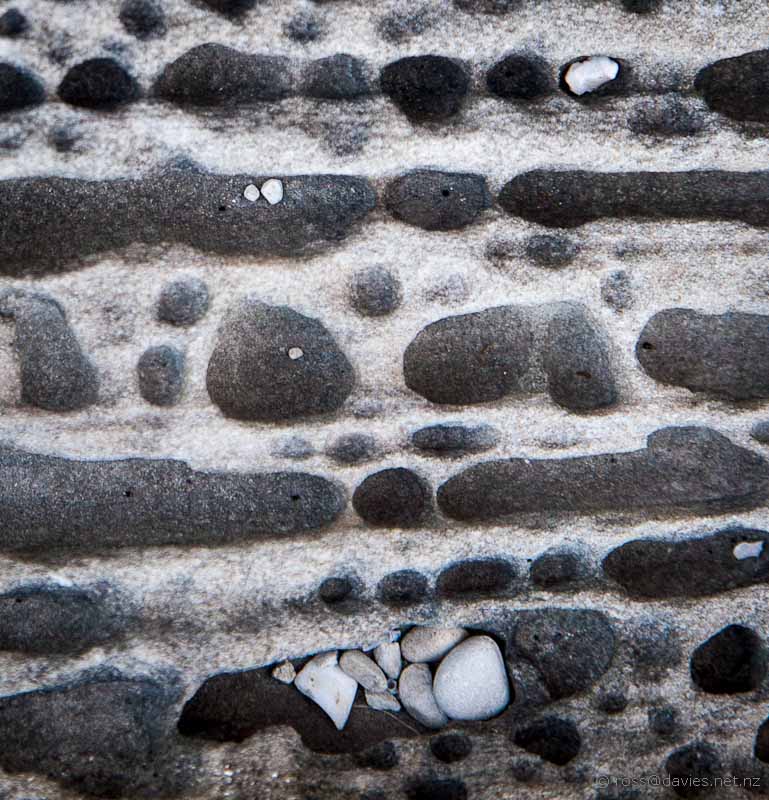 Shoreline rock patterns on the Mangawhai Cliff Top Walkway – showing how the holes are sculpted by small pebbles. 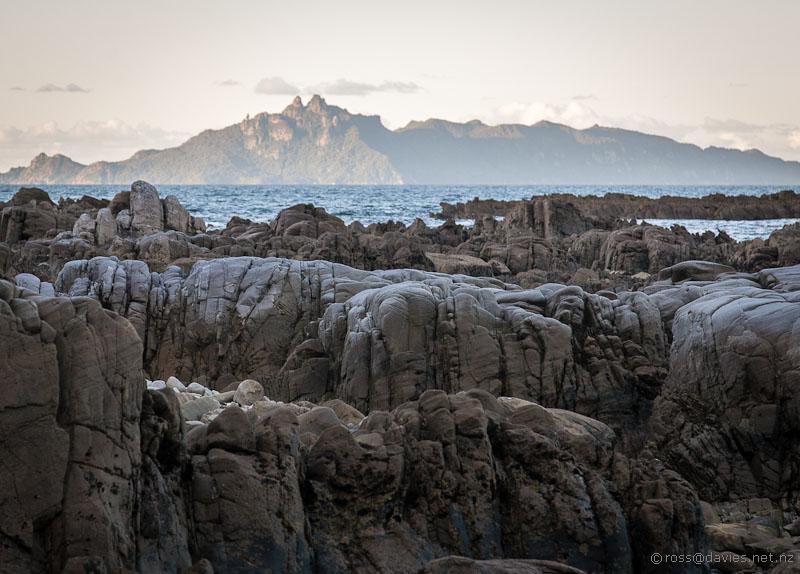 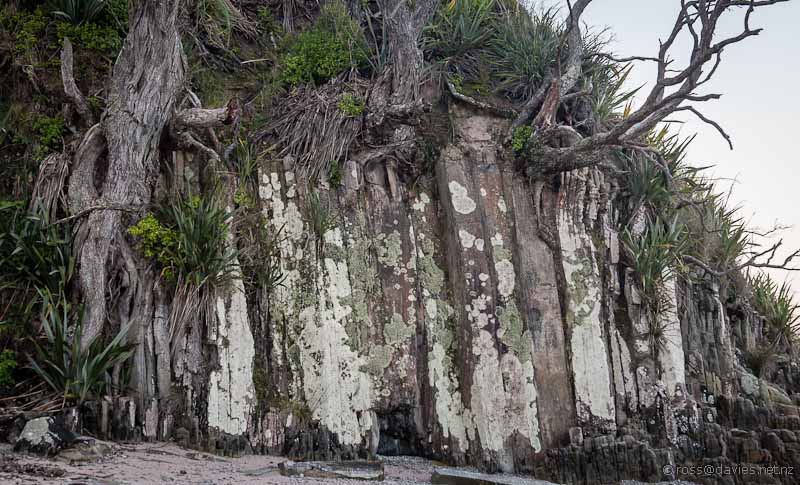 Basalt columns on the shoreline on the Mangawhai Cliff Top Walkway 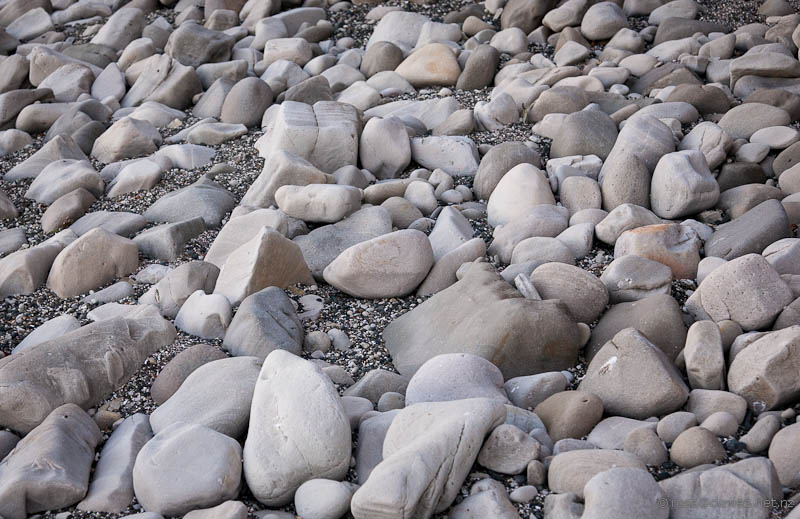 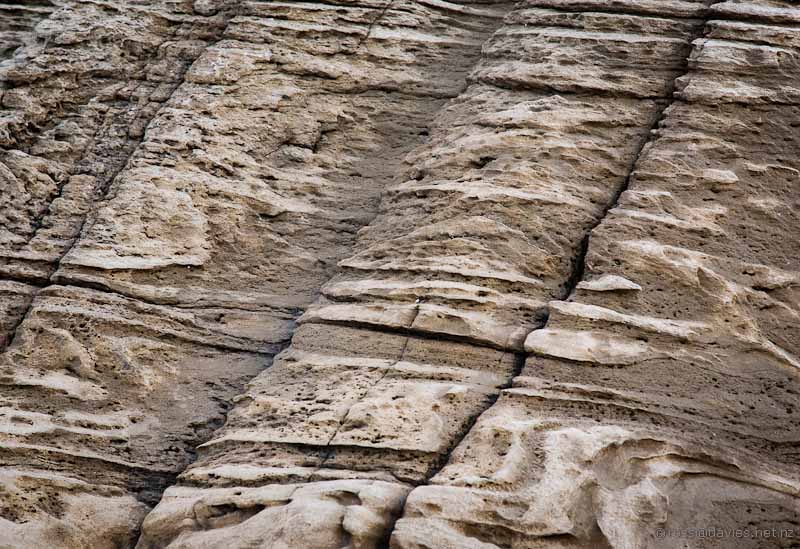 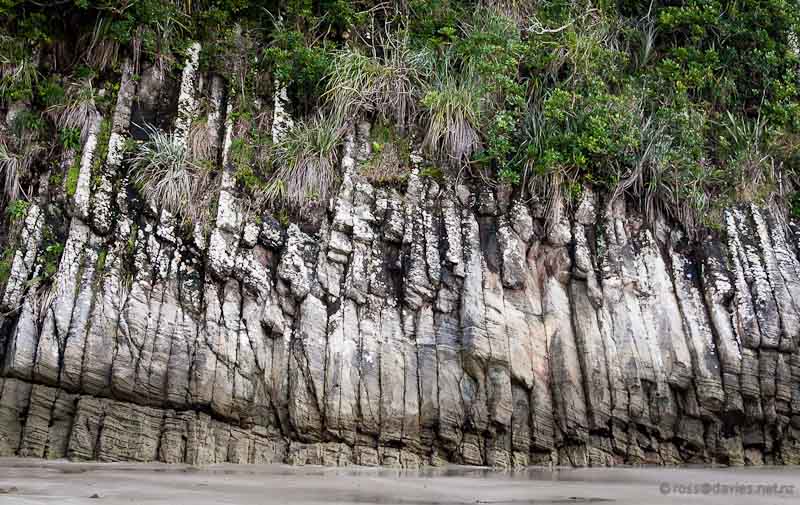 Basalt columns on the shoreline on the Mangawhai Cliff Top Walkway

It was definitely dusk by the time we reached the main beach that we’d started on. On the walk back along the beach we spotted a small group of dolphins just beyond the breakers. They were heading in the opposite direction, sometimes surfing the waves. It was a nice way to end a wonderful walk. 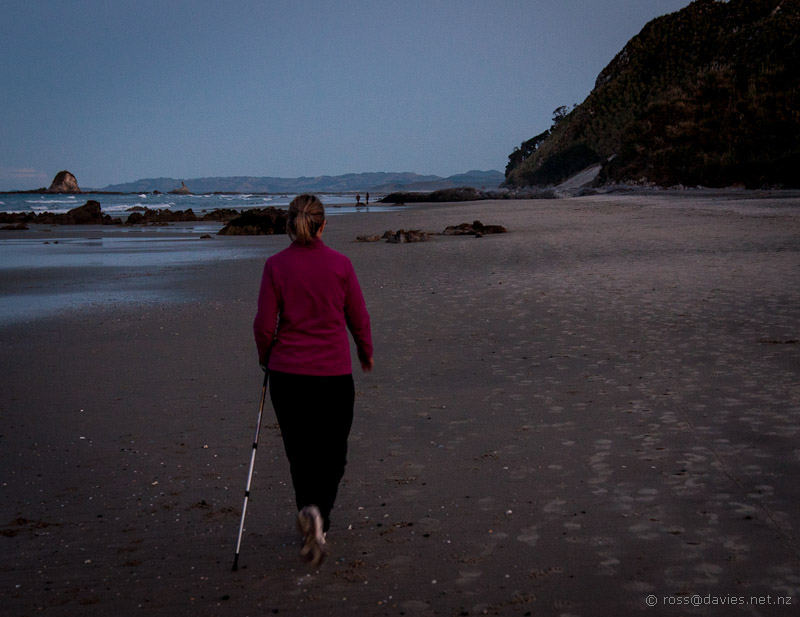 We were back at the car by 6.30pm so the round trip took us just on 3 hours. We’d agree that it is one of the best coastal walks in the country, with a lot of everything. 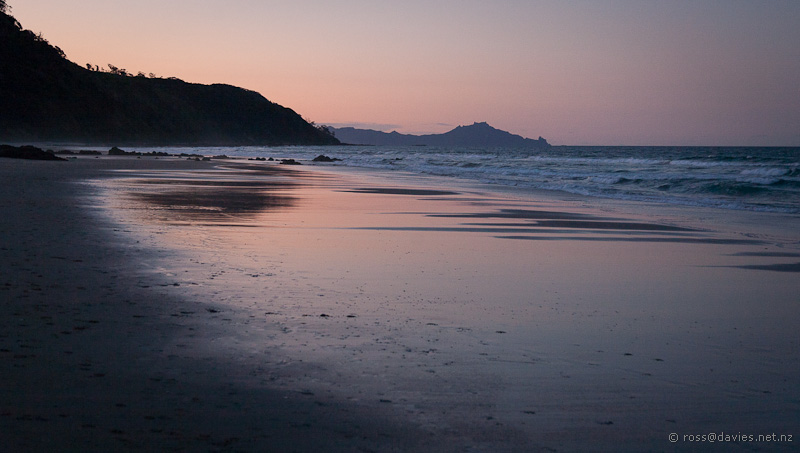