Voting for a Great Leap Backwards

I used to like elections; well loved them really. Although I’m thinking more of the local government ones which most people find extremely uninteresting. But not me. I enjoyed them, especially being a candidate for something. Elections for the community board; elections for the city council. It was a chance to try to move things along and promote some discussion. I was always significantly unsuccessful in running for the council, but it was a lot of fun. Especially when it got to the billboard years.

I found this photo just the other day, and thought I’d share it while people are interested in elections generally. It is from a print I’ve scanned, from the mid to late 1990s. I was on the Chalmers Community Board and running again (successfully) for re-election to the board. The Labour Party wanted candidates for some of the city council wards and with my paternal familiarity with Flagstaff that seemed a nice ward for me to run in. 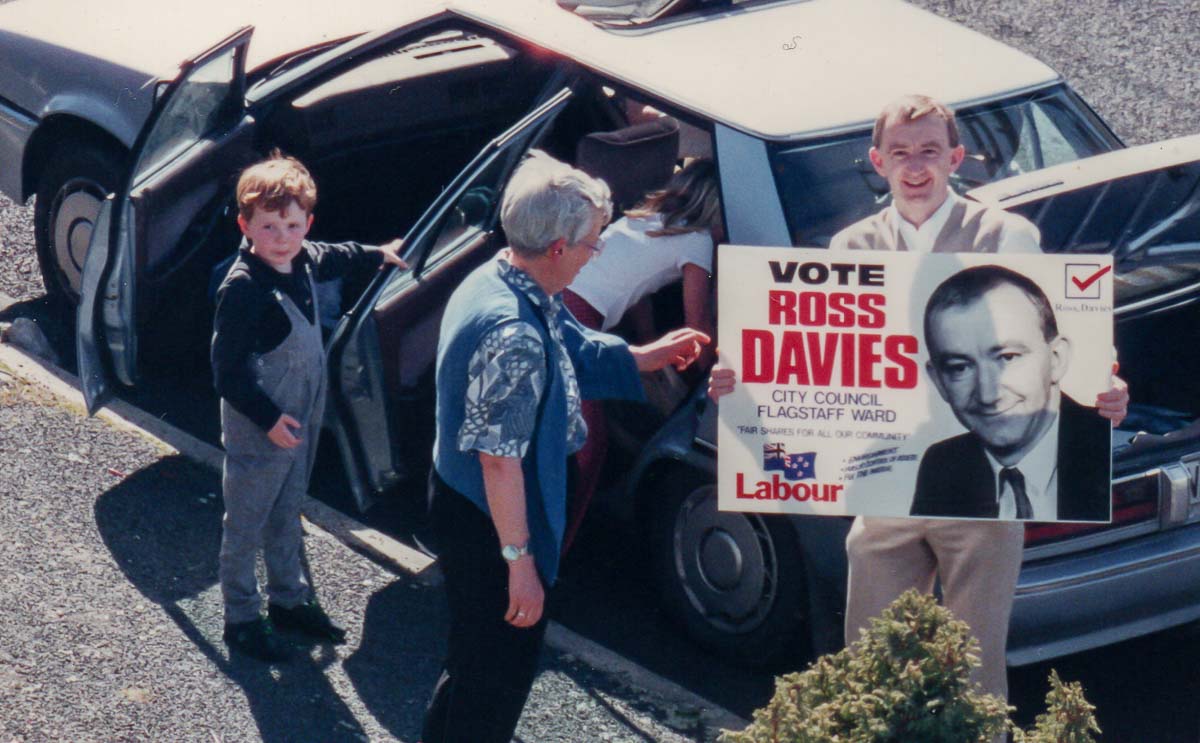 Ross (maybe in oatmeal-coloured suit) and billboard. Cousin Val is admiring me close up. And on the left Andrew is maybe wondering what it’s all about.

It was fun putting up billboards around town, including one outside the rubbish dump in Green Island which was nowhere near the Flagstaff Ward. It did however allow Cousin Val to give me a wave each morning on her way past going to work. We were an earnest group, with lots of good policies. Which did us no good at all as even in those days it was all about who was well known and who knew who. Nobody cared about who did and who didn’t want to sell off the city assets. Until the elected ones did sell them off and then they were quite annoyed.

It was a bit strange having my picture displayed around town. For years afterwards I’d meet some people who thought they might know me from somewhere. I had a fair idea where that might have been from.

There was one candidate in the ward Peter Chin who didn’t seem to have any sort of profile in the campaign. I felt slightly sorry for him and thought at least I wouldn’t come last. So much for my political sense. Peter Chin bolted in, and went on to become mayor. And I came last or second last out of the 10 candidates. But it had been fun. And the used billboards came in handy for a lot of projects. The kids used some for sliding in the snow, and cut out some of my heads to use as masks which was slightly spooky. As my old Dad used to say; “it’s an ill wind that doesn’t blow some good”.