These days I catch my bus home from work outside what I still think of as the old Chief Post Office. It’s a long long time since it was a post office. But it was. Now that I remember, one of my first jobs was a summer holiday job in the mail room, behind the very busy mail posting slots. The CPO is now the Distinction Hotel. The restaurant blows some tempting smells out into Princes Street which is a bit cruel late in the day.

Across Princes Street is the former National Insurance Building, from the days when many companies were still headquartered in Dunedin. It was very modern in its day, with a four-sided digital clock/thermometer on the top. I started my office career on the third floor of the National Insurance Building in the Valuation Department. I began there on some sort of 1970s work scheme (PEP?) with a big desk and a big pile of valuation plans to convert to metric. They were so impressed with my happiness with such a boring job that they offered me a full-time position, as a Roll Clerk.

National Insurance Building Princes Street on the left, reflecting the Distinction Hotel. The office I worked in was on the 3rd floor.

I loved the challenge of reconciling the legal descriptions and land parcels; across the road searching land titles at Lands and Deeds in John Wickliffe House and Lands and Survey Department (now Department of Conservation). One of the seniors had her desk immediately in front of mine where she chain-smoked all day. She seemed to be saving on matches because she always lit the next smoke before her current one was finished. Often she had two on the go at once. It seems hard to imagine now.

Cook Allan Gibson former offices in the centre, on Princes street, with the Scenic Circle Southern Cross Hotel across High Street on the right. The cake shop was in front of the red car (I think)

Just along the street was the ‘new’ office block on the corner of High Street which Cook Allan Solicitors gradually took over. Mum and Dad were clients and with their motel business there were lots of meeting over the years, and I got involved in the 1980s and hung spent many an hour there one way and another. In the 1970s there was a cake shop on the street level where I went every morning for my iced bun for morning tea.

Dunedin’s Exchange area was once the hub of the city. Every government department has offices within a stones throw, and there were lots of head offices nearby. The Exchange was the Stock Exchange with lots of banks and brokers around and about. The tide went out in the 1980s, and the area went into decline. Now the old buildings are being re-purposed, both around the exchange and a couple of streets over in the Vogel Street area. Coincidentally Cook Allan Gibson solicitors have moved to a converted warehouse in Vogel Street. Very industrial-modern.

It’s wonderful to see the transformation. There’s not a cake shop yet, but there are lots of nice cafes. The Exchange area has gone in circle. I guess my life has too, catching my bus home from my current job at the same place I had two of my first jobs. 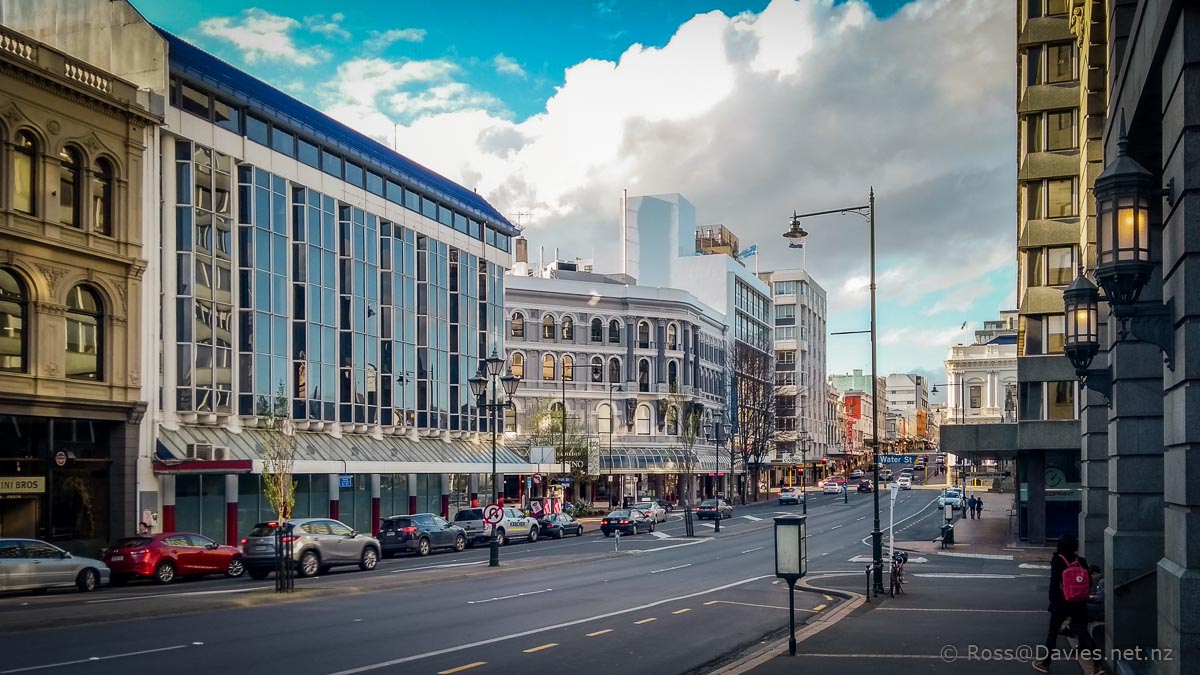 Princes Street Dunedin in the Exchange area. Former Cook Allan Gibson office on the left, then across High Street the Southern Cross Hotel including the newer building which once housed State Insurance. Taken from my bus stop outside the Distinction Hotel which was once the Dunedin Chief Post Office. Just along the street is John Wickliffe House where the Lands and Deeds office was. The old ornate white two-storey building further up Princes Street on the right was where my grandfather had his dental surgery rooms on the first floor.